One of the most complex human mysteries involves how and why we became an outlier species in terms of biological success.

Research findings published in the March 11 edition of the journal Science by an international team of noted anthropologists, including several from Arizona State University, who study hunter-gatherer societies, are informing the issue by suggesting that human ancestral social structure may be the root of cumulative culture and cooperation and, ultimately, human uniqueness.

Because humans lived as hunter-gatherers for 95 percent of their species’ history, current foraging societies provide the best window for viewing human social evolution, according to the authors. Given that, the researchers focused on co-residence patterns among more than 5,000 individuals from 32 present-day foraging societies around the globe, including the Gunwinggu, Labrador Inuit, Mbuti, Apache, Aka, Ache, Agta and Vedda. Their findings identify human hunter-gatherer group structure as unique among primates. 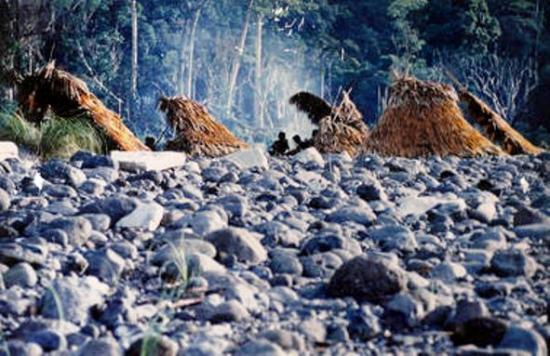 This photo by Thomas Nickell, taken in 1981, shows the camp of the Agta, an indigenous Philippine group. The Agta are one of the hunter-gatherer societies whose co-residence patterns were studied by a team of anthropologists led by Arizona State University professor Kim Hill. By examining census data on recent hunter-gatherers, the researchers determined that the biological success of humans likely stems from ancestral social structure. The international team of researchers report their findings in the March 11 edition of the journal Science. (Photo courtesy of Thomas Nickell)

Their finding showed that across all groups, adult brothers and sisters frequently live together, making it common for male in-laws to co-reside. They also found that it was equally common for males or females to move from or remain with family units. This is in contrast to other primate species, where either males or females move to another group at puberty.

A major point in the study is that foraging bands contain several individuals completely unconnected by kinship or marriage ties, yet include males with a vested interest in the offspring of daughters, sisters and wives. This organization mitigates the group hostility frequently seen in other apes and also promotes interaction among residential groups, thereby leading to the development of a large social network.

“The increase in human network size over other primates may explain why humans evolved an emphasis on social learning that results in cultural transmission,” said Hill. “Likewise, the unique composition of human ancestral groups promotes cooperation among large groups of non-kin, something extremely rare in nature.”

The group’s findings appear in the paper “Co-Residence Patterns in Hunter-Gatherer Societies Show Unique Human Social Structure.” It is the first published analyses of adult co-residence patterns in hunter-gatherer societies based on census data rather than post-marital residence typologies, Hill noted.