From 2013 to November of 2014, in coordination with infrastructure, Zhejiang Provincial Institute of Cultural Relics and Archaeology in conjunction with Anji County Museum conducted the third and fourth consecutive excavations to the Anle Site in Changle village, Anji county, Zhejiang province. With an area of about 2000 square meters, archaeologists cleared up 88 tombs, 28 remains of burnt red earth, 1 house foundation, 13 ash pits and 3 ditches, unearthing abundant pottery, stone tools, jadeware, woodware, and other kinds of relics. According to the remains, they are all from Songze Culture period (ca. 5800-4900 BP).

Overview of the excavation area

The site is about 80 meters’ long, about 40 meters’ wide, with an area of about 4000 square meters in total, including about 1000 square meters where tombs and burnt red earth were concentrated distributed. On the eastern slope of the mountain, there is a ditch (G4), which is on the southwest-northeast direction, filling abundant plant remains, pottery shard, and a small amount of woodware. Thanks to the excavation data, we know that Anle Site is a settlement built around the hill, combining many separate site units. 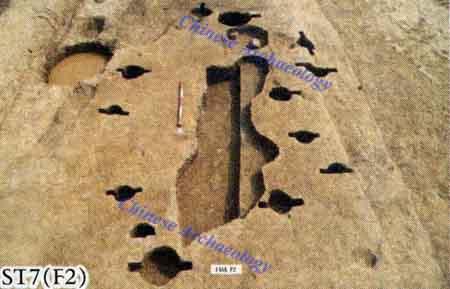 The 88 tombs of Songze Culture are mostly on the north-south direction, concentrated distributed. The numbers of funeral objects are from 1 to 3, 5 to 9. Among the pottery funeral objects, there are Ding (tripod), Fu (cauldron), Dou (a high-stemmed shallow saucer with cover on a round base), jar, pot, cup, basin, He (kettle), spinning wheel and etc. A combination of Fu and pot, Ding and pot, Ding and basin, Fu and Dou, Ding and pot, jar and cup and etc can be commonly found as well. Most of the pottery are plain, only few of them were decorated with piled pattern or hollowed-out, with a simple and practical style. Fu cauldron has concave edges, plumped belly and round bottom. Ding tripods are mostly with shovel-shaped feet. The belly of He vessel is vertical and folded, with the handle up-wrapped. Small types of pottery, combination of Fu cauldron and jar, are very distinctive, which were made of brown clay mixed with sand, with flared-mouth and round bottom. A spinning wheel (M47:4), appears caved symbols in the obverse side. The majority of stone tools are adze, as well as some axe. Altogether, there are 60 pieces of jadeware, including Jue (an incomplete penannular ring), Huang pendant, tube, pendant and etc. 19 pieces of jade Jue were found in pairs at the south end of the chamber, including pie-shaped and clip-shaped. 18 pieces of Huang pendant were found, among them, most are half-circle-shaped, few are bridge-shaped. Anle Site is the one which has unearthed the largest amount of jade Jue and Huang ornament; and which is the only one that unearthed sawtooth-shaped Huang of Songze Culture period in Northern Zhejiang province, so far.

In addition, many traces of burnt red earth were found, and they were irregular shaped, mostly shallow- pit-shaped. Around ST7, dozens of post-holes were found as well. The accumulation of burnt red earth may relate to the house construction, which might be used as damp-proof layer. 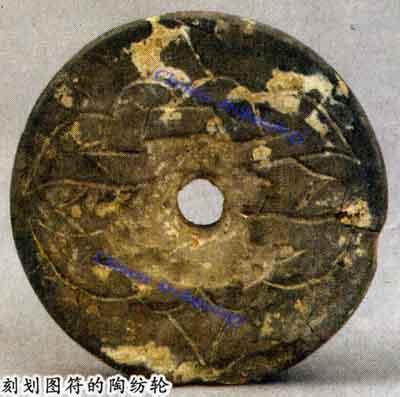 Pottery spinning wheel,  caved symbols in the obverse side

Anle Site is a hill slope site surrounded by the hills, also a completely preserved Songze Culture site in Northern Zhejiang province, until now, with a clear site scope and an integration of living and funeral. Various combinations of pottery; back-off Fu, Dou and etc pottery put in the head area; abundant amount of stone adzes; quartz and tremolite nephrite coexisted; mainly Jue and Huang of the jadeware.