Drought Led to Demise of Ancient City of Angkor 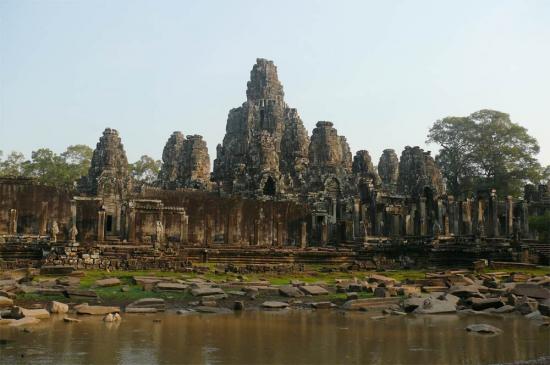 Bayon temple, constructed by Angkorian King Jayavarman VII in the late 12th century. The faces may be representations of Buddha, the bodhisattva Lokesvara, Jayavarman VII, or a combination.
CREDIT: Mary Beth Day, University of Cambridge

The ancient city of Angkor — the most famous monument of which is the breathtaking ruined temple of Angkor Wat — might have collapsed due to valiant but ultimately failed efforts to battle drought, scientists find.

The great city of Angkor in Cambodia, first established in the ninth century, was the capital of the Khmer Empire, the major player in southeast Asia for nearly five centuries. It stretched over more than 385 square miles (1,000 square kilometers), making it the most extensive urban complex of the preindustrial world. In comparison, Philadelphia covers 135 square miles (350 sq. km), while Phoenix sprawls across more than 500 square miles (1,300 sq. km), not including the huge suburbs.

Suggested causes for the fall of the Khmer Empire in the late 14th to early 15th centuries have included war and land overexploitation. However, recent evidence suggests that prolonged droughts might have been linked to the decline of Angkor — for instance, tree rings from Vietnam suggest the region experienced long spans of drought interspersed with unusually heavy rainfall.

Angkor possessed a complex network of channels, moats, and embankments and reservoirs known as barays to collect and store water from the summer monsoons for use in rice paddy fields in case of drought. To learn more about how the Khmer managed their water, scientists analyzed a 6-foot (2-meter)-long core sample of sediment taken from the southwest corner of the largest Khmer reservoir, the West Baray, which could hold 1.87 billion cubic feet (53 million cubic meters) of water, more than 20 times the amount of stone making up the Great Pyramid at Giza.

Also, to collect samples from across the greater Angkor region, researcher Mary Beth Day, a paleolimnologist at the University of Cambridge in England, hired a "tuk-tuk" (motorized rickshaw) driver, and was able to convince him to drive her around the countryside, "often on tracks that tuk-tuks probably aren't designed to travel on," she recalled. "We nearly got stuck in the sand a couple of times, but my driver was remarkably accommodating given that he probably thought I was crazy."

The researchers deduced a 1,000-year-long climate history of Angkor from the baray. They found at around the time Angkor collapsed the rate at which sediment was deposited in the baray dropped to one-tenth of what it was before, suggesting that water levels fell dramatically as well. The discovery "really emphasizes how significant the events during this period must have been," Day said.

As both water levels and sediment deposits ebbed, the ecology of the baray changed as well, with more bottom-dwelling algae and floating plants coming into existence.

"The ecological shift primarily serves to underline how environmental conditions in the West Baray have been fundamentally different since the 17th century, post-collapse, as compared to what the baray was like during Angkorian times," Day said.

In the end, the water management systems of the Khmer might have been insufficient to cope with sudden and intense variations in climate.

"Angkor can be an example of how technology isn't always sufficient to prevent major collapse during times of severe instability," Day told LiveScience. "Angkor had a highly sophisticated water management infrastructure, but this technologic advantage was not enough to prevent its collapse in the face of extreme environmental conditions."

"It's important to understand, however, that failure of the water management network was not the sole reason for the downfall of the Khmer Empire," Day added. "The collapse of Angkor was a complex process brought about by several different factors — social, political and environmental."

The scientists detailed their findings online Jan. 2 in the Proceedings of the National Academy of Sciences.