An ancient clay vessel reconstructed from pieces discovered at a Canadian museum is riddled with tiny holes, leaving archaeologists baffled over what it was used for. 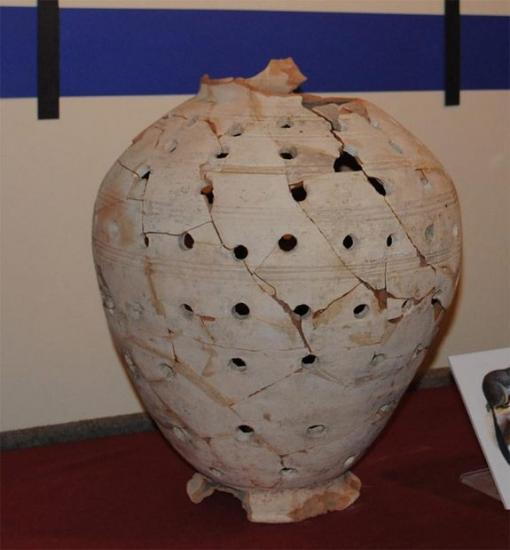 This ancient jar is full of holes, including one at its base; though scientists have no idea what it was used for, they believe it dates back 1,800 years to Roman Britain.
CREDIT: Photo courtesy Katie Urban/Museum of Ontario Archaeology

The jar, just 16 inches (40 centimeters) tall and dating back about 1,800 years, was found shattered into an unrecognizable 180 pieces in a storage room at the Museum of Ontario Archaeology. But even after it was restored, the scientists were faced with a mystery. So far no one has been able to identify another artifact like it from the Roman world.

"Everyone's stumped by it," Katie Urban, one of the researchers at the London, Ontario, museum, told LiveScience. "We've been sending it around to all sorts of Roman pottery experts and other pottery experts, and no one seems to be able to come up with an example."

The jar may have held rodent snacks for ancient Romans, or even served as a lamp, the researchers speculate, though no theory definitively holds water.

Where did the jar come from?

Archival research indicates the jar was among artifacts from Roman Britain (the part of Great Britain under Roman control from about A.D. 43 to 410) that were given to the museum in the 1950s by William Francis Grimes, an archaeologist who died in 1988. Grimes' team had dug them out of a World War II bomb crater in London, England, not far from an ancient temple dedicated to Mithra, an Iranian god who was popular throughout the Roman Empire. Urban cautioned, however, that it is not certain the jar is from that dig. The vessel does not appear to be on the list of artifacts received from Grimes, although she added that the jar was found in 180 pieces and the list was short on details.

"How it came to be in our collection is not 100 percent clear; we're still trying to figure that out," Urban said.

There is a small chance the mystery vessel came from Iraq, because another collection of artifacts found in storage at the museum came from the ancient city of Ur. Those date as far back as 5,000 years ago. Leonard Woolley, an archaeologist best known for discovering a rich series of royal burials at Ur, had excavated them in 1931 and sent them to the British Museum. The museum in turn sent them to the University of Western Ontario in 1933 as a gift.

How was it used?

The question on the team's mind is: Why would a Roman create a jar full of holes?

"There are a lot of different options, a lot of them involving either a lamp or some sort of animal container," Urban said, adding that while the tiny holes would've allowed light to pass through the object, the hole at its bottom suggests it wasn't a lamp.

Another possibility is that the jar was used to store dormice, rodents found throughout Europe; ancient texts suggest the mice were a popular snack for Romans.

(One ancient recipe suggests eating a dormouse "stuffed with a forcemeat of pork and small pieces of dormouse meat trimmings, all pounded with pepper, nuts, laser, broth." Then, "put the dormouse thus stuffed in an earthen casserole, roast it in the oven, or boil it in the stock pot.")

Urban said the problem with this theory is that dormice jars from elsewhere in the Roman world look different from this vessel. The rodent jars were equipped with a ramp that mice could run along and use to help store food within the holes.

Yet another idea is that the jar held snakes, ones too big to slither out through its holes. Snakes were a popular religious symbol throughout the ancient world.

"It's anyone's guess," said Urban. "We need to find somebody who has seen something similar to it, but so far we haven’t found that."

The artifact is currently on display at the Museum of Ontario Archaeology as part of an exhibit on Ur and Roman Britain. The show runs through the first week of September.