In order to better understand how ceramics are able to resist heat, the National Science Foundation has awarded grants totaling half a million dollars to three research groups to look into how the ancient Greeks made their pottery, a process which allowed for as many as 100,000 vases to survive from ancient antiquity to now - a period of some twenty five hundred years. The hope is that such research will reveal more about the nature of iron-spinel chemistry, which is what gives ceramics an ability to withstand heat while remaining chemically stable. Getting a better grip on how ceramics work is critical to future space flight technological efforts, as ceramics are used to help space vehicles withstand both extreme hot and cold temperatures. 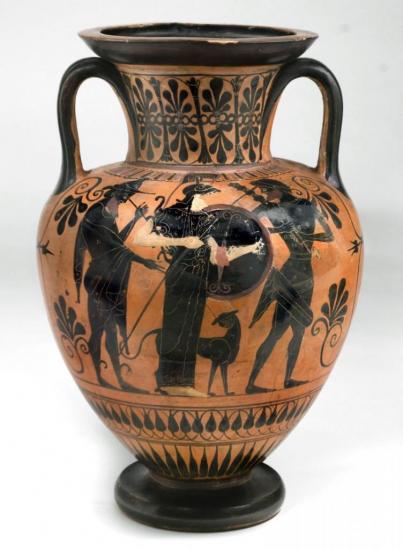 In order for space vehicles to work properly, they have to be able to withstand the cold of space, which can be as low as 250 degrees Fahrenheit below zero. Then, some vehicles have to be able to withstand the extreme heat of reentry, which can be as hot as 3000 degrees. Hot enough to melt most any metal. As most know, the Space Shuttle was fitted with ceramic tiles on its underbelly to keep the vehicle from overheating as it came back to Earth, which was made all the more apparent when damage to the tiles resulted in the loss of Columbia in 2003. But ceramics are used in other components as well, and will be needed as more ambitious projects are undertaken in the future. Equally important is the ability of ceramics to remain chemically unchanged when subjected to such temperature variations. Such properties allow for the construction of components that minimize expansion and contraction under such stresses, which can be critical for long term operations in space. This is why the NSF has turned to research scientists to see if the ancient Greeks can provide some insight.

Such research will involve using something called x-ray absorption near edge structure (XANES) - which is a special type of spectroscopy, along with other types of x-ray techniques, to find out what has gone on with iron oxidation in the pottery under study. What’s needed is a better understanding of the molecular structure of iron minerals that were used to make the pottery to help researchers in designing newer and better types of ceramics for future space missions, whether manned or otherwise.

What’s interesting is that it is apparently the degree to which the iron in the ancient ceramic pottery oxidized that caused the distinctive red and black colorations that made it so attractive to those that worked with it all those years ago.