Are Greece’s inhabitants heading for better or worse times? Will the family be able to take a holiday this year? Such questions seem to trouble everyone’s minds during this current period of economic and social unrest. Thousands of years ago, the ancient Greeks were also plagued by uncertainty and frequently wondered what they should do. For consolation and enlightenment they turned to augurs (omen readers) and priests or priestesses who interpreted the will of the all-knowing gods. 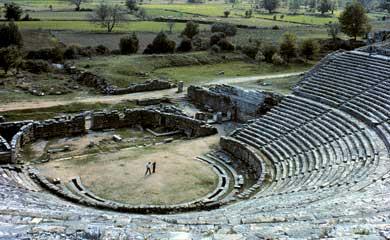 Unlike fortunetellers today, however, ancient soothsayers dealt less with making specific predictions about the future than offering assurances that particular decisions were correct or incorrect or that the gods looked favorably or unfavorably upon particular actions. Ancient augury took many forms, including the reading of flights of birds and the examination of sacrificial animals’ livers or other internal organs. Sometimes right and wrong, or favor and disfavor, were determined through the casting of lots -- like the rolling of dice today. Colored pebbles or animal bones (including pigs’ “knucklebones”) were commonly used in these divinations.

More formal, highly ritualized prophetic practices also took place in or beside certain ancient Greek temples. Among the gods associated with oracles and prophesies were Apollo and Zeus, whose sanctuaries at Delphi and Dodona were well-known in Greek lands and elsewhere in the Mediterranean world for their priests’ and priestesses’ strange abilities to convey divine pronouncements.

The archaeological site of Delphi today is one of the most frequently visited, widely recognized sites in Greece. In this respect, little has changed since antiquity. Delphi, beginning in the 8th century BC, was considered an important center, the naval of the ancient world. The authority and guidance of this oracular sanctuary of Pythian Apollo was respected by Greeks and foreigners alike wishing to send out colonies, establish new cults, settle political disputes, sanction military campaigns, clarify ethical and judicial principles or simply resolve ordinary concerns arising from the daily uncertainties of the human experience. Unlike rites practiced in other Greek sanctuaries that remained closely guarded secrets, such as those of the Eleusinian Mysteries, the rituals and divine utterances of Apollo’s oracle at Delphi were subjects recorded and commented upon by numerous ancient writers through the centuries, including Pliny the Elder, Diodorus Siculus, Plato, Aeschylus, Cicero, Strabo and Plutarch. The exact workings of the oracle were never fully understood but authors generally agree on the existence of a chasm, over which sat the Pythian priestess inhaling vapors or sipping spring water that aided in her transmission of Apollo’s often ambiguous judgments.

Plutarch, a Boeotian native who gained fame in late 1st century AD Rome for his essays and biographies, provides a firsthand account of the oracle at Delphi. As a senior priest who long served in the sanctuary, Plutarch recorded detailed observations of the Pythian priestess’s trance-like, occasionally erratic behavior during sacred rituals. Plutarch’s fascinating account nevertheless offered only tantalizing clues into the true nature of the oracle’s operation – until a multidisciplinary team of specialists in the late 20th century uncovered tangible proof that affirmed the historical text’s remarkable accuracy.

Plutarch observed a sweet, perfume-like odor emanating from the Apollo temple’s inner sanctum (adyton), which he attributed to vapors and springwater issuing from beneath the building’s foundations. These emissions were not strong in his day but sufficient to place the priestess (perhaps preconditioned through fasting) in a mild trance-like state. She listened to visitors’ questions, chanted her responses in a strangely altered voice and afterward was visibly fatigued. Plutarch relates that, on one occasion, the priestess exhibited a dramatic, adverse reaction to conditions within the adyton, lapsing into hysteria, shrieks and convulsions before ultimately collapsing and eventually dying.

Archaeologists began to unearth Delphi’s ruins in the late 19th century but found no trace of a crevice in the ground that might have emitted vapors. Sources of springwater near the temple of Apollo also defied detection. For nearly a century, specialists believed the ancient texts were wrong. Then, in the 1980s and 90s, new geological findings at Delphi began to unravel the mystery. Archaeologist John Hale assembled a multidisciplinary team, including a geologist, a chemist and a toxicologist, that re-examined Delphi’s landscape and pieced together a fascinating explanation.

Delphi rests on bituminous limestone, with two subterranean faults that meet directly beneath the Apollo temple. Periodic shifting of these faults in antiquity probably created friction and heat that released petrochemicals in the limestone in the form of vapor. Geological coring also revealed a natural spring uphill from the temple, previously attested by Pausanias in the 2nd century AD. Analysis of the water led to the discovery of ethylene, a sweet-smelling gas, which in ancient times must have been a component not only of the local spring but also of the rising vapors. Anesthesiologists previously experimented with ethylene in the mid-20th century, during which they discovered a trance-like state could be induced. Larger doses caused unconsciousness. Occasionally, test patients became incoherent and convulsive. Ethylene gas, then, seems to be the secret behind the Pythian priestess’s behavior. Over the last decade, the scientific findings of Hale and his collaborators have revolutionized the understanding of Apollo’s oracle at Delphi and reaffirmed the credibility of ancient observers.

Also highly respected in ancient times, and reputed by historical sources to have been older than Delphi, was Zeus’ oracular sanctuary at Dodona, set among magnificent mountains southwest of Ioannina. Homer’s characters Achilles and Odysseus refer to Dodona (see below) and archaeologists have indeed traced the site’s foundation back to the Mycenaean era in the 2nd millennium BC. Like Apollo’s cult at Delphi, however, Zeus seems to have inherited a shrine previously sacred to Gaia, the Earth Mother goddess.
The reading of signs and answering of pilgrims’ questions followed distinctive rituals at Dodona, where Zeus and Dione (formerly Gaia) were worshipped in the open air around a sacred oak tree. The remains of a stone altar and many bronze and iron tripods attest to the tradition that Zeus’ priests, the Selli, interpreted his will from the reverberating sounds of metal cauldrons arranged in a continuous circle around the base of the oak.

Omens also were read from the rustling of the oak’s leaves and the flights of doves that inhabited its branches. From the first half of the 4th century BC Zeus’ shrine became monumentalized in stone. A small temple was constructed beside the oak tree and a wall surrounded the complex pierced by an ornamental gateway. The oracles at Delphi and Dodona continued to operate until the 4th century AD, when the rising popularity of Christianity finally led to the Apollo sanctuary’s closure and the felling and uprooting of Zeus’ sacred oak at Dodona.

Homer’s accounts
From “The Iliad” (16, 231 ff.):
Achilles prays to Dodonaean Zeus while his friend Patroclus, dressed in Achilles’ armor, sets off to fight Hector.
“Then [Achilles] made prayer, standing in the midst of the court, and poured forth the wine, looking up to heaven... ‘Zeus, thou king, Dodonaean, Pelasgian, thou that dwellest afar, ruling over wintry Dodona, and about thee dwell the Selli, thine interpreters, men with unwashen feet that couch on the ground... My comrade am I sending forth... to war: with him do thou send forth glory, O Zeus, whose voice is borne afar, and make bold the heart in his breast... [and] let him come back to the swift ships with all his arms and his comrades...’”

From “The Odyssey” (19, 296 ff.):
Odysseus, in the guise of a wandering beggar, speaks to his unknowing wife Penelope, reassuring her that Odysseus is in the area and will soon return.
“But Odysseus, he said, had gone to Dodona to hear the will of Zeus from the high-crested oak of the god, even how he might return to his dear native land after so long an absence, whether openly or in secret. ‘Thus, as I tell thee, he is safe, and will presently come; he is very near, and not long will he now be far from his friends and his native land.’”