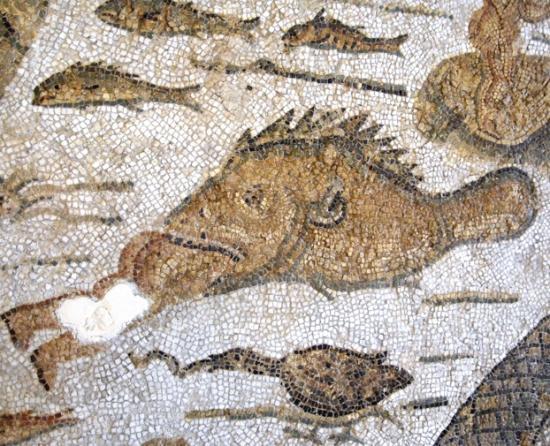 This ancient Roman mosaic from the Bardo National Museum in Tunis shows a giant grouper swollowing a fisherman. Courtesy of Giorces/Creative Commons.

The dusky grouper, one of the major predators in the Mediterranean sea, used to be so large in antiquity that it was portrayed as a "sea monster," a new study into ancient depictions of the endangered fish has revealed.

Considered one of the most flavorful species among the Mediterranean fish, the dusky grouper (Epinephelus marginatus) is a large, long-lived, slow-growing, protogynous hermaphrodite fish (with sex reversal from female to male). It can be found mainly in the Mediterranean, the African west coast and the coast of Brazil.

Having faced harvesting for millennia -- grouper bones have been found in human settlements dating back more than 100,000 years -- this species has been decimated in recent decades by commercial and recreational fishing. It is now categorized as endangered on the International Union for Conservation of Nature (IUCN) Red List.

The recovery of endangered fish species requires a careful evaluation of some key elements, such as abundance, size structure, and spatial distribution. Such evaluation usually involves comparing unfished areas with unprotected sites.

"But most such marine protected areas are too small and 'young' (established a few decades ago, at most) to provide information on 'pristine' conditions," Guidetti and colleague Fiorenza Micheli, a professor of marine ecology at Stanford's Hopkins Marine Station, wrote in the current issue of Frontiers in Ecology and the Environment.

To look farther back into the grouper's history, the researchers examined hundreds of Etruscan, Greek, and Roman paintings and mosaics depicting fishing scenes and fish.

At the end, they focused on 23 mosaics which represented groupers. In 10 of the 23 mosaics, dating from the 1st to 5th centuries, groupers were portrayed as being very large.

Indeed, the ancient Romans might have considered groupers some sort of "sea monsters" able to eat a fisherman whole, as shown in a 2nd century mosaic from the Bardo National Museum in Tunis. 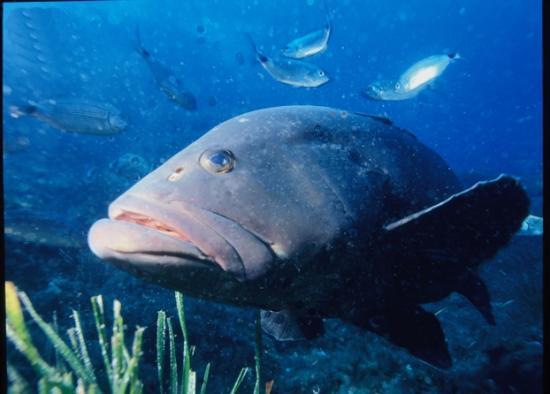 The mosaics also indicated that groupers lived in shallow waters much closer to shore, and were caught by fishermen using poles or harpoons from boats at the water's surface.

"It's a technique that would surely yield no grouper catch today," said the researchers.

Although there are no known instances of dusky groupers attacking human swimmers, the art depictions are very "informative," said the researchers.

"These representations suggest that groupers were, in ancient times, so large as to be portrayed as sea monsters and that their habitat use and depth distribution have shifted in historical times," Guidetti and Micheli wrote.

Ancient Roman authors such Ovid (43 B.C. – 18 A.D.) and Pliny the Elder ((23 A.D. – 79 A.D.) reported that groupers were fished by anglers in shallow waters, where they are now rare if not completely absent.

According to their accounts, fish were so strong they could break fishing lines.

The researchers noted that grouper populations in marine reserves now show signs of returning to their historical sizes and depths, with groupers moving into shallower waters.

Achieving population abundances five to 10 times greater than those in unprotected areas of the Mediterranean, groupers in no-take reserves can reach sizes of 35-40 inches (versus 20-24 inches for groupers at fished sites).

"Ancient art provides a link between prehistorical and modern evidence and suggests that shallow near shore Mediterranean ecosystems have lost large, top predators and their corresponding ecological roles," the researchers concluded.