A study suggests that ancient humans were writing way before what was once believed, backdating the tradition by thousands of years. 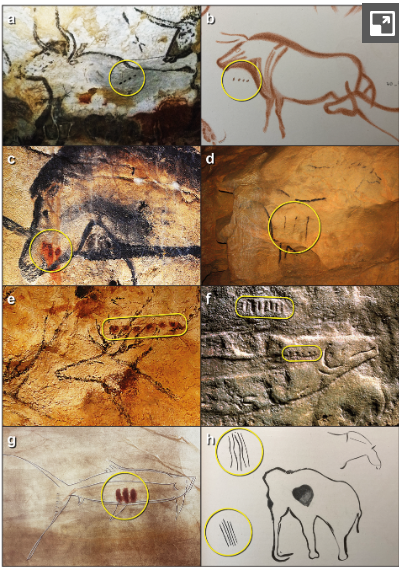 When was writing initially invented? Though anthropologists and archaeologists tend to accept that the oldest written word appeared around 5,000 years ago, a new paper published in the Cambridge Archaeology Journal pushes this date back by about 15,000 years.

According to the paper, Ice Age individuals scored and painted strange symbols, including dots, slashes and asterisks, on rock surfaces inside and outside of caves and across portable items such as sticks and stones, to record the seasonal activities of their favorite animals. If these findings stand up under scrutiny, it may mean that our ancient ancestors were much more advanced than previously appreciated.

“The ability to assign abstract signs to phenomena in the world […] to record past events and predict future events was a profound intellectual achievement,” the researchers posit in their paper.

Ice Age individuals adorned an assortment of surfaces across France and Spain with representations of regional prey animals, from bison to birds to fish, approximately 20,000 years ago. And sometimes, in caves such as Lascaux, Chauvet and Altamira, these representations were augmented with stunning sequences of abstract symbols, whose meanings still stump anthropologists and archaeologists today.

Working with the supposedly “uncontroversial” assumption that these sequences maintained some sort of notational or numerical meaning to their makers, a team of researchers recently assessed a series of 862 animal representations from the Upper Paleolithic to translate the three widest spread symbols: the dot, the slash and the y-shaped sign.

Ultimately, the team surmised that the number and the placement of these symbols related information about the mating and birthing of their associated animals, which was of the utmost importance to individuals of the time.

It is no surprise that thinking about animals is central to hunter-gatherers’ being in the world,” the researchers state in their study. “It follows that knowledge of the timing of migrations, mating and birthing would be a central concern.”

What’s In A Word?

Using statistical analysis to scrutinize these animal-and-sequence associations further, comparing patterns of birthing, mating and migration to patterns of dots, slashes and strokes, the team found that the simple dots and slashes symbolized the number of synodic months after the start of the spring (out of the total of 13) that the associated animals started to mate. Alternatively, they found that the placement of the Y-shaped strokes symbolized the beginning of the species’ birthing season.

According to the authors, while the sequences may not constitute the “full-blown” form of the written word, they certainly comprise a preliminary phase in the transition to writing.

“Perhaps it is best described as a proto-writing system,” the researchers add in their study.

Some archaeologists and anthropologists who were not involved with the work warn that the researchers did not investigate alternative interpretations of the three markings, nor did they investigate the meanings of other markings in Upper Paleolithic art, outside of the three that they selected. That said, several still support the theory that these markings meant something meaningful to their makers, whether they signified the seasonal activities of animals or not.

Ultimately, the researchers state that they intend to investigate several other Paleolithic symbols in the future. Until then, though, they stress in their study that their work offers “specific insight," for the first time, "into what one set of notational marks means."