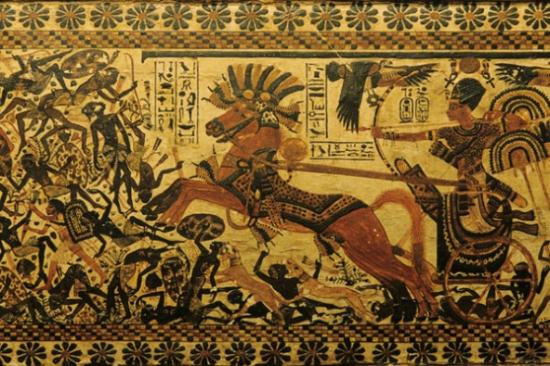 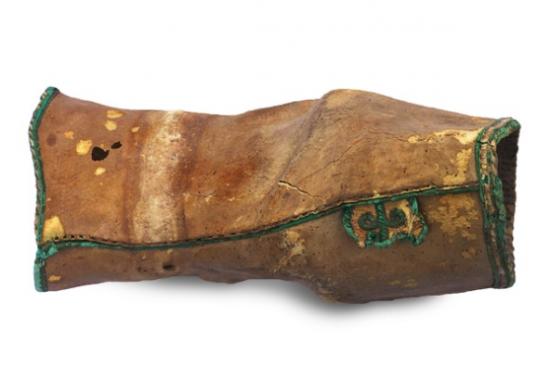 One of the two gauntlets worn on the drivers’ forearms, showing impressions where the the fastening straps dug into the leather during use. Part of the 3,300-year-old chariot trappings now being studied in the Egyptian Museum in Cairo. André J. Veldmeijer/SCA/Egyptian Museum Authorities 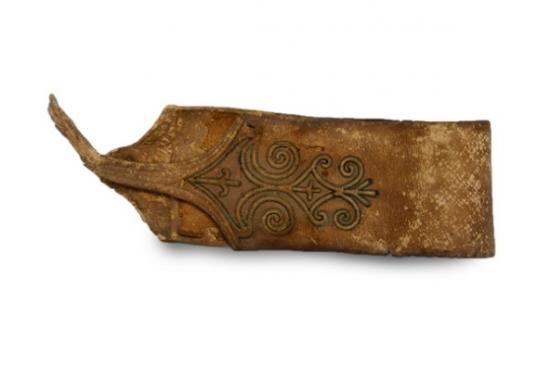 A wide decorated strap that probably fitted around the driver’s hips, to keep him steady in the chariot. André J. Veldmeijer/SCA/Egyptian Museum Authorities

The beautifully preserved leather trappings of an ancient Egyptian chariot have been rediscovered in a storeroom of the Egyptian Museum in Cairo. Researchers say that the find, which includes intact harnesses, gauntlets and a bow case, is unique, and will help them to reconstruct how such chariots were made and used.

The ancient Egyptians used chariots — typically with one or two riders and pulled by two horses — for hunting and warfare as well as in processions. They are frequently shown in ancient Egyptian art, and several examples of the wooden frames survive, including six dismantled chariots found in King Tutankhamun’s tomb, dating to around 3,300 years ago.

But researchers knew little about the leather trappings and harnesses used with such chariots, as leather decomposes quickly if any moisture is present. Barely any leather survives on the chariots from Tutankhamun’s tomb, though some fragments are known from chariots found in other tombs, such as that of Yuya and Thuya, Tutankhamun’s great-grandparents.

Then in 2008, André Veldmeijer of the Netherlands-Flemish Institute in Cairo, who specializes in the study of ancient leather, saw a black-and-white photograph of some intact chariot trappings in a 1950s book on ancient technology1.

They were labelled as being held in the Egyptian Museum, but when Veldmeijer asked the curator, Ibrahim El Gawad, he knew nothing about them. But a few months later, El Gawad came across the trappings by accident, lying forgotten in a series of drawers in a back room of the museum.

Veldmejier says that El Gawad called him to the museum and showed him “layer upon layer” of leather. “It’s a gorgeous find,” he says. “What was in the picture, that’s not even half of what’s in the museum. It was astonishing.”

The trappings are 90–95% complete, according to Veldmeijer, and include the leather casing that would have covered the wooden chariot, as well as harnesses, gauntlets, and a bow case and quiver. Wear marks and details of the stitching are still visible, and the intricate red, green and white design — the only known example of its type — is still bright after more than three millennia.

Veldmeijer is now working with Salima Ikram, an Egyptologist at the American University in Cairo, to conserve, catalogue and study the trappings as part of the Egyptian Museum Chariot Project. That includes attempting to open out the fragile pieces — which had been folded to fit into the museum drawers — and protecting them with acid-free packing material. They will report their first results at a dedicated conference to be held in Cairo next year.

“The trappings should help us to understand more about chariot construction and use, which in turn will be important for our knowledge of ancient Egyptian warfare and elite display,” says Susanna Harris, an expert in ancient textiles and animal skins at University College London. She adds that the results may also have implications for the study of chariots in other societies for which there are no surviving examples. “For example there are chariots in the wall paintings and iconography of Crete (Minoans) and mainland Greece (Mycenaeans) dating to this period but no preserved chariot leather there,” she says.

The Egyptian Museum project is in its early stages but the researchers are already gaining new insights into how the chariot was used. For example, Ikram has identified a leather strap that she thinks acted as a safety belt. “It would have fitted around the driver’s bum to stabilize him, and to stop him from falling out,” she says.

Veldmeijer also hopes to identify the type of leather used, as well as studying the stitching and skin-processing methods and how the leather was cut and assembled.

One mystery yet to be solved is where the chariot trappings come from originally. Museum records state that they were bought from a Greek antiquities dealer called Georges Tano in 1932, but it isn’t known where he found them. To have survived in such good condition they were presumably discovered in a tomb, and the style suggest a time around that of Tutankhamun.

El Gawad thinks that they belonged to Tutankhamun's father, the rebel pharaoh Akhenaten, but Veldmeijer believes them to date from slightly later, possibly belonging to one of Tutankhamun’s successors. 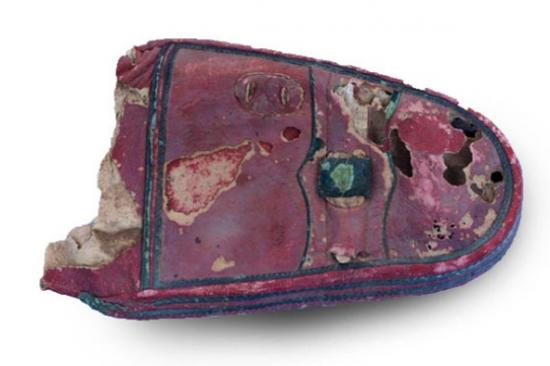