Researchers sequenced whole genomes from five Canaanites skeletons found in Sidon, Lebanon. - ALI HASHISHO/REUTERS/Newscom
When the pharaohs ruled Egypt and the ancient Greeks built their first cities, a mysterious people called the Canaanites dominated the Near East. Around 4000 years ago, they built cities across the Levant, which includes present-day Lebanon, Israel, Jordan, and part of Syria. Yet the Canaanites left no surviving written records, leaving researchers to piece together their history from secondhand sources.
One of those sources is the Bible’s Old Testament, which documents a grisly end for the Canaanites: After the Israelites’ exodus from Egypt, they swept into Canaan and annihilated its people. But did that really happen? Archaeological data suggests that Canaanite cities were never destroyed or abandoned. Now, ancient DNA recovered from five Canaanite skeletons suggests that these people survived to contribute their genes to millions of people living today.

The new samples come from Sidon, a coastal city in Lebanon. Marc Haber, a geneticist at the Wellcome Trust Sanger Institute in Hinxton, U.K., extracted enough DNA from the ancient skeletons to sequence the whole genomes of five Canaanite individuals, all around 3700 years old.

Haber’s first mission was to figure out who the Canaanites were, genetically speaking. Ancient Greek sources suggested they had migrated to the Levant from the East. To test that, Haber and colleagues compared the Canaanite genomes to those of other ancient populations in Eurasia. It turned out the Greeks were half right: About 50% of the Canaanites’ genes came from local farmers who settled the Levant about 10,000 years ago. But the other half was linked to an earlier population identified from skeletons found in Iran, the team reports today in The American Journal of Human Genetics. The researchers estimate these Eastern migrants arrived in the Levant and started mixing with locals around 5000 years ago. 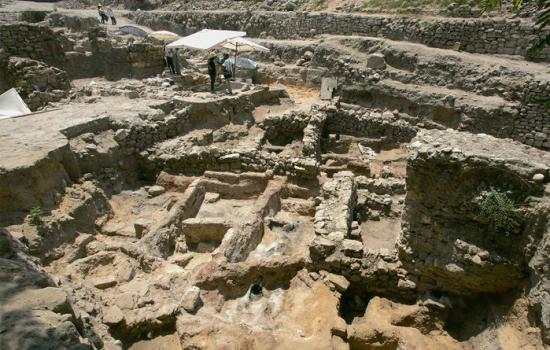 Archaeologists have been excavating the Canaanite city of Sidon since 1998. ALI HASHISHO/REUTERS/Newscom

This finding fits with other recent studies of the Levant. Iosif Lazaridis, a geneticist at Harvard Medical School in Boston, saw the same mixture of eastern and local ancestry in the genomes of ancient skeletons from Jordan. “It’s nice to see that what we observed wasn’t a fluke of our particular site, but was part of this broader Canaanite population,” Lazaridis says.

Now that Haber had confirmed who the Canaanites were, he set out to find out what happened to them. He compared their genomes to those of 99 living Lebanese people and hundreds of others in genetic databases. If the Israelites had wiped out the Canaanites as the Bible claimed, the ancient populations wouldn’t have been able to pass on their genes to modern people. Instead, Haber found that the present-day Lebanese population is largely descended from the ancient Canaanites, inheriting more than 90% of their genes from this ancient source. The other 7% may have come from migrants from Central Europe who moved to the Levant around 3000 years ago.

So does the new study finally put to bed the Bible’s story about the destruction of Canaan? Not quite, says Wellcome Trust Sanger Institute geneticist Chris Tyler-Smith, who worked with Haber. Perhaps the ancient Israelites were genetically distinct from the Canaanites and researchers simply haven’t found one of their skeletons yet. But of course, just because populations have similar genes doesn’t mean they share a culture. “You can have genetically similar or indistinguishable populations that are culturally very different and don’t get on with one another at all,” he says. This might have been the case with the Israelites and the Canaanites—similar genes, but sworn enemies.

“If those populations conquer each other, it probably wouldn’t leave traces that we could easily pick up [with ancient DNA],” agrees Johannes Krause, a geneticist at the Max Planck Institute for the Science of Human History in Jena, Germany, who wasn’t involved in the current work. Perhaps there was a Biblical war that ancient DNA simply cannot see.