Ancient DNA and teeth show: Romans brought mules with them 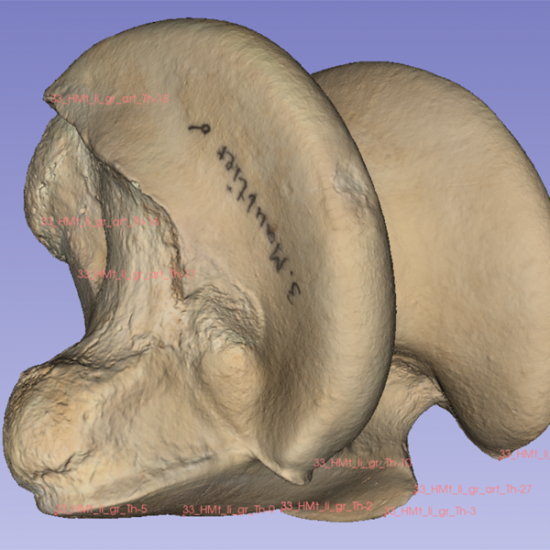 3D view of the left talus (ankle bone) of a mule (male, castrated) from the State Collection for Paleoanatomy Munich. | © Michaela Zimmermann, LMU

The Romans were the first to bring mules to Central Europe. Before they took mules northward across the Alps in the first century, horses were the only riding animals used by the peoples there. This was revealed by genetic analyses conducted by a research group from the ArchaeoBioCenter at LMU, the State Collection for Paleoanatomy Munich, and the University of Vienna.

Until the end of the Iron Age in the first century before Christ, the peoples in Celtic settlements in the northern Alpine foothills exclusively bred horses. Highly prized by the Celts as “animals for the elite,” horses were chiefly used for military operations. When Romans pushed into the regions north of the Alps shortly before the birth of Christ and settled there, they took mules with them from the Mediterranean area. Mules were esteemed by the military as pack and work animals. Romans valued the horse-donkey hybrids particularly for their strength, endurance, and sure-footedness in mountainous terrain. In addition, mules can survive on less valuable feed and are more resistant to diseases than horses and donkeys.

Before now, the beginning of the economic and military significance of mules for the peoples in settlement regions north of the Alps was fraught with uncertainties. Even for experts, it is tricky to distinguish the archeological remains of Equidae – that is to say, horses, donkeys, and their hybrids, mules and hinnies – from each other. Most skeleton parts of animals from this family are just too similar. A team of researchers from the Chair of Paleoanatomy, Domestication Research, and the History of Veterinary Medicine at LMU, the University of Vienna, and the State Collection for Paleoanatomy Munich has now investigated ancient DNA from more than 400 equids from one Celtic and seven Roman settlements in the northern provinces of the Roman Empire – today’s southern Germany, eastern Switzerland, and Austria.

The researchers compared the genetic analyses with the results of traditional methods of species identification – analysis of the morphology, shape, and size of mandibular teeth and particular bones. Remains of mules were found only in the Roman settlements. Furthermore, the investigations revealed that mules can be identified not only from their ancient DNA, but also through the characteristics of their premolar teeth in particular.

“However, the secure identification of the horse-donkey hybrids is contingent upon access to comprehensive reference collections of equid skeletons, so that researchers can compare them against archeological finds,” explains Joris Peters, Director of the State Collection for Paleoanatomy Munich and Chair of Paleoanatomy at LMU. “DNA is not always sufficiently well preserved in archeological material to be able to identify animals with certainty. Building up comprehensive natural history collections is therefore also essential for research into past cultures.”