Strains that plagued Europe and the United States in the nineteenth century were distinct from those prevalent today. 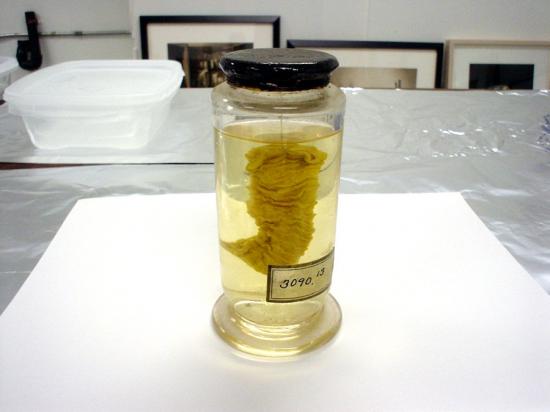 Preserved intestine from a cholera victim yielded the genome of the bacterium behind Philadelphia's 1849 epidemic.

A deadly cholera outbreak gripped Philadelphia and other metropolises along the Eastern seaboard in early 1849, the second in 20 years. About 1,000 of the city's residents died as result of infection with the water-borne pathogen that year, a figure that might have been considerably higher were it not for a programme to wash the city's filthy streets with clean reservoir water. Now DNA isolated from the preserved 165-year-old intestine of a victim has yielded a complete genome sequence of the bacterium responsible — the first from a nineteeth-century strain of Vibrio cholerae.

The genome shows that most cholera strains in circulation today, known as El Tor, are genetically distinct from the 'classical' cholera that plagued European and North American cities in the nineteenth century, and was responsible for the 1849 outbreak in Philadelphia. (It would be five more years before the British physician John Snow showed that London's cholera was caused by water contaminated with faecal matter.)

“One of the big questions is, ‘where did classical go?’” says Hendrik Poinar, a biological anthropologist at McMaster University in Hamilton, Ontario, who led the study, published this week inNew England Journal of Medicine1. Classical cholera strains still crop up, but El Tor strains have caused most epidemics since the 1960s — including an outbreak that has infected hundreds of thousands and killed more than 8,000 in Haiti since it began in 2010.

Poinar’s team estimates that these two lineages shared a common ancestor that circulated hundreds or even thousands of years ago, probably around India’s Bay of Bengal. Neither why the classical strains emerged first nor why these were later replaced by El Tor is clear, says Poinar.

Genetic changes to the bacteria offer one explanation, Poinar adds. His team found that the Philadelphia isolate seems to contain an extra copy of an integrated viral genome that encodes a toxin compared with more recent classical strains. Losing this extra set of genes could have made the classical strains less transmissible, allowing El Tor to dominate. That hypothesis needs to be tested with laboratory experiments, says Poinar, whose team plans to sequence the genomes of historical cholera strains from continental Europe and England.

Tom Gilbert, an evolutionary geneticist at the University of Copenhagen, says new methods for retrieving the DNA of ancient pathogens make sequencing them straightforward: the hard part is finding good samples. The section of intestine Poinar and colleagues used was collected — probably from a male African American patient — by a doctor named John Neill as part of a study on cholera’s effects on the lining of the intestine. It was stored in alcohol in a wax-sealed jar at the College of Physicians of Philadelphia and later its Mütter Museum. “Such materials, when found, are real gems,” Gilbert says. “And that Hendrik is starting to find them and do such good work is fantastic.”