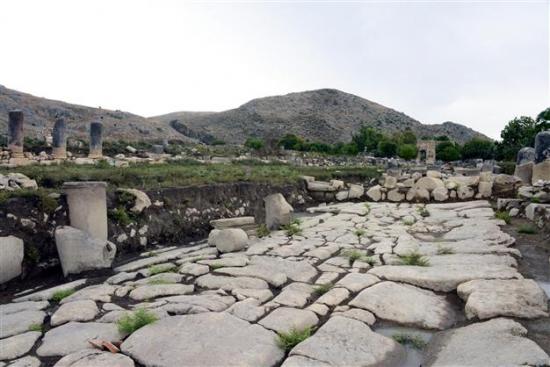 Ongoing excavations in the 2,000-year-old ancient city of Anavarza, located in the southern province of Adana’s Dilekkaya village, have unearthed a battle field of gladiators for the first time.

The excavations, which have a record budget of 1 million Turkish Liras, are headed by the Çukurova University Archaeology Department’s Fatih Gülşen.

Speaking about the works that have continued nonstop for the last 14 months, Gülşen said the ancient city of Anavarza was the largest one in Anatolia with its castle, bathes, churches, triumphal arch, aqueducts, rock tombs, stadium, mosaics and theater.

He said works would last for a while in the ancient city. “Even the 22.5-meter-long and 10.5-meter-high triumphal arc, which was built in the 3rd century in memory of the Roman Empire’s victory against the Persians, looks magnificent,” he added.

Gülşen said “Anavarza” meant invincible, and continued: “Works in the ancient city show that the city was established by Emperor Augustus in 19 B.C. but we know there were earlier settlements. The sole, largest double road of the ancient era is here. This road, which is 34 meters wide and 2,700 meters long, entered literature as the world’s first and oldest street. Both sides of the street are decorated with 1.5-meter columns.”

Gülşen also said Anavarza’s ancient church, built in the 5th century on the foundations of a Roman temple, was probably made for a very important saint named Dioscorides, who is considered “the father of pharmacies.” According to Gülşen, “[He] was born was born in this city and prepared nearly 1,000 medicines by using some 50 plants unique to this ancient city.”

He added, “One of the world’s best known poets Opianus also lived here. We think that this ancient city had university-like schools where these important people studied. ... A brick-made bath in the ancient city is also the first example of heating system in the region.” 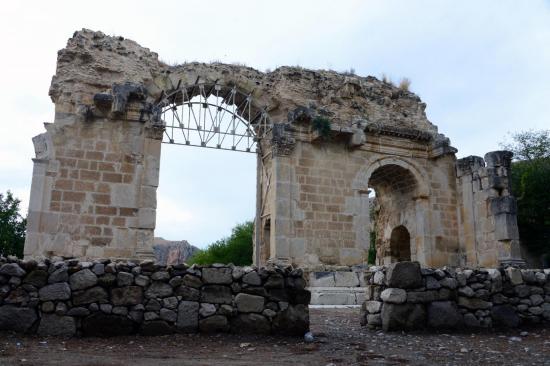 Gülşen said the works in Anavarza, which covers an area of 40,000 square meters, would contribute greatly to tourism and the history of archaeology, with its recent discovery of one of the largest stadiums in Anatolia, along with an amphitheater.

“[The stadium] has observation towers made of giant granite columns. Stadiums are the places where the world’s first Olympic Games were held. The amphitheater, where we have not started digging yet, is located on a vaulted structure. The rooms of gladiators and cells of wild animals like lions and tigers will be definitely come to light during excavations. There are three examples of this in Anatolia. The best one among these three surviving examples is in Anavarza. When we find this structure, it will be the only example in Anatolia after the restorations,” Gülşen said.