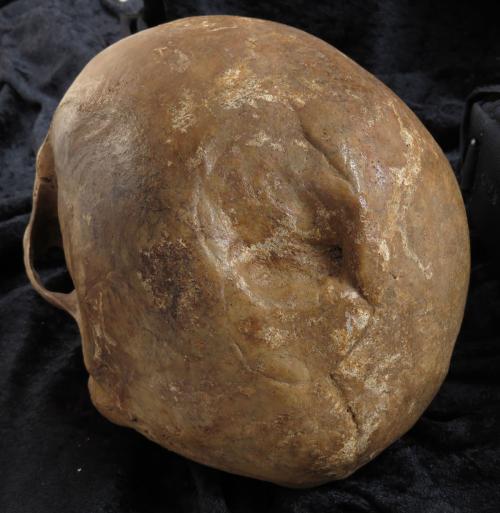 A healed depressed fracture on a skull from the early modern Sortebrødre cemetery in Odense, Denmark. Credit: George R. Milner; collection, ADBOU University of Southern Denmark
A trio of researchers with members from Denmark, the U.S. and Germany has found that a group of men living in medieval Denmark who had healed head traumas had a 6.2 percent higher chance of dying at any given time than did other men in the general populace. In their paper published in Proceedings of the National Academy of Sciences, Jesper Boldsen, George Milner and Svenja Weise describe their study of skulls found in medieval cemeteries and how it relates to the modern study of traumatic head injuries.
Traumatic head injuries have been in the news a lot of late, primarily because of later life lingering impacts being reported by athletes—but it is also common with soldiers and victims of car accidents. Scientists would like to better understand what happens to people who survive such events later on in life because it might lead to more effective treatments early on.

To learn more, the research trio examined the skulls of men whose remains had been dug out of medieval cemeteries in Denmark. They found a surprisingly high rate of cranial vault fractures—8.9 percent of all those studied—which suggested that life back then for such men was particularly violent. The team then compared the lifespan of those with such injuries with those without them and found that traumatic head injuries that were severe enough to leave evidence of fractured skulls, meant the men were 6.2 percent more likely to die at any point later on, a likelihood that is roughly twice as high as for people with such injuries that are treated with modern methods.

What is still not clear (because they were not able to determine the cause of death) is whether the medieval men died early as a direct result of their injuries, whether it was because of changed behavior due to the injury (as has been seen with many athletes) or because those with such injuries tended to live a more risky existence in general, which might have led to their initial injury and which would seem to have increased the likelihood of more injuries or even death later on.

Abstract
To date, no estimates of the long-term effect of cranial vault fractures on the risk of dying have been generated from historical or prehistoric skeletons. Excess mortality provides a perspective on the efficacy of modern treatment, as well as the human cost of cranial injuries largely related to interpersonal violence in past populations. Three medieval to early modern Danish skeletal samples are used to estimate the effect of selective mortality on males with cranial vault injuries who survived long enough for bones to heal. The risk of dying for these men was 6.2 times higher than it was for their uninjured counterparts, estimated through a simulation study based on skeletal observations. That is about twice the increased risk of dying experienced by modern people with traumatic brain injuries. The mortality data indicate the initial trauma was probably often accompanied by brain injury. Although the latter cannot be directly observed in skeletal remains, it can be inferred through the relative risks of dying. The ability to identify the effects of selective mortality in this skeletal sample indicates it must be taken into account in paleopathological research. The problem is analogous to extrapolating from death register data to modern communities, so epidemiological studies based on mortality data have the same inherent possibility of biases as analyses of ancient skeletons.