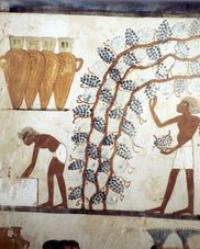 Tartaric acid and other organic acids have been identified in modern materials like terracotta floor tiles and ceramic storage containers as markers of wine, before being used to detect wine traces in archaeological samples.

A team of European scientists has been engaged in a project over several years that aims to identify markers of wine in archaeological materials. Wine has been one of the most important commodities in the Mediterranean region for thousands of years and there is keen interest from the archaeological and historical communities in its manufacture, distribution and consumption. Being a liquid product, you might think that it would be difficult to identify wine traces in ancient vessels that have long dried out, but that is not the case. The residues that are left behind contain certain substances that are characteristic of wine and can be used to show that wine was once there.

One of these wine markers is tartaric acid, a simple organic acid present in wine, which originates from the grape. However, the detection of tartaric acid does not automatically point to the presence of wine because it is also found in other grape products like juice, as well as in some fruits such as star fruit and tamarind. So, the archaeological context of any suspect findings should also be taken into account.

There are other organic acids present in wine like fumaric, succinic and malic acid. Syringic acid is regarded as the marker of red wine. When taken together, the occurrence of several of these acids along with the location of any finds can be a strong indication of wine in archaeological materials. This is the basis of the research conducted by Alessandra Pecci from the University of Barcelona, with co-researchers from the Catalan Institution for Research and Advanced Studies, Barcelona, and the University of Siena, Italy.

They devised a GC/MS method that can detect all of these organic acids, combined with a novel extraction scheme to ensure that the meagre traces were efficiently removed from various types of material for analysis. In the first instance, they analysed modern materials that are associated with wine, like ceramic pans and jars as well as floor materials that might become contaminated following spillages. Thereafter, they applied the procedure to ancient materials in the search for evidence of contact with wine.

The "young" objects included a small ceramic amphora in which wine was stored for one month, since these are traditional storage vessels for wine. Since wine was used in ancient times for cooking, the researchers also heated red wine in a ceramic pan until it completely evaporated, then repeated the process 20 times.

Parts of this pan were also buried under soil in the woods of an archaeological site for 7 years, excavated and sampled, then buried again, to study the effects of degradation. In another experiment, a fragment of a ceramic pan used for cooking wine was heated in an oven at 70°C for 18 days.

To replicate conditions in wine cellars and buildings in which the grapes were processed, a plaster brick was impregnated with wine for a month before sampling. In all cases, the same red Chianti from Tuscany was used to facilitate any comparison between the different samples.

In an extension of the work towards real rather than simulated conditions, porous tiles from a working wine cellar were also analysed. Finally, two archaeological samples were tested for the presence of wine. The first was a dolium (an earthenware jar) excavated from a building that had been covered by the eruption of Vesuvius in AD 472. It was assumed that the building had been used for wine storage. The second sample was a piece of plaster from a vat found at Son Pereto in Mallorca that archaeologists thought had been used to produce wine or oil.

In all cases, the samples were extracted with a solution of potassium hydroxide and the supernatant was acidified and extracted itself with ethyl acetate. The organic acids in the extracts would not pass through the GC column as they were, so they were reacted with a silylating agent in a conventional derivatising reaction for GC/MS analysis.

A shard of the ceramic amphora in which the wine was stored yielded fumaric acid as the most abundant organic acid, followed by succinic, malic and tartaric acids. Other minor acids like lactic, acetic and vanillic acid were also detected. The same acids were present in the pan used for heating wine, but in different proportions, presumably due to the effects of high temperature. Tartaric, citric and syringic acids were the most abundant and fumaric acid became less abundant.

The porous tile from the working wine cellar contained these acids in low amounts compared with other compounds like fatty acids, which were attributed to the previous storage of olives before they were milled to produce olive oil.

Having identified these organic acids as markers of red wine, the team examined the ancient materials. A coating found in the ancient dolium from Italy contained tartaric acid together with traces of succinic, malic, fumaric and citric acid. It would appear that the dolium had been used for wine, even though the proportions of the acids were different to those of the modern samples. Traces of abietic acid derivatives were also detected, suggesting that the vessel had been coated with pine resin.

The final artefact was the piece of plaster from the vat in Mallorca, which also contained tartaric acid and other wine-related compounds such as succinic, fumaric and malic acid. This does suggest that the vat had been used for wine in some way, perhaps in its production or storage.

These studies show that tartaric acid and the other organic acids found in wine can survive for hundreds of years in residues that are coated on pots or absorbed into materials associated with winemaking, like vessels and floor tiles. When the archaeological context of an artefact is taken into consideration, they can present a strong indication of the presence of wine. This GC/MS method will open up many labs to the detection of wine residues, replacing the more expensive LC/MS/MS procedures which have been used in the past.