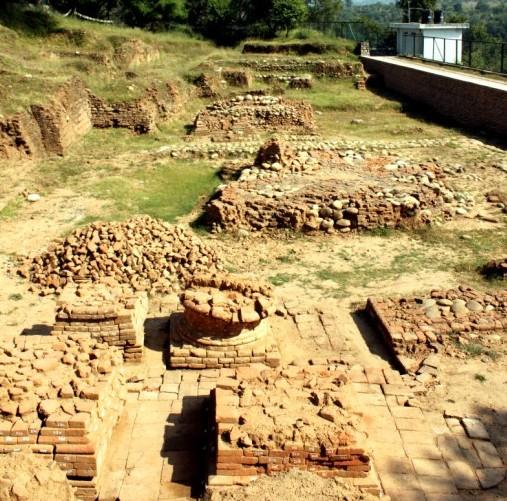 A view of the excavation site of Ambaran on the outskirts of Akhnoor town, near Jammu city in Northern India on October 29, 2012. In front are the four Votive stupas. (Venus Upadhayaya/Epoch Times Staff)

The ancient Buddhist site, Ambaran, dating back to 2nd century B.C. to 7th century A.D., is located near the Jammu region of India.

The Srinagar Circle of Archaeological Survey of India (ASI) carried out excavations for two seasons between 1999 to 2001 and 2008 to 2010, making it one of the latest Buddhist site discovered by the ASI.

During the excavation, Buddhist monastic establishment from the period of 1st to 3rd century A.D. was unearthed. A stupa, votive stupa, and walls of a monastery were exposed all built of burnt brick masonry. 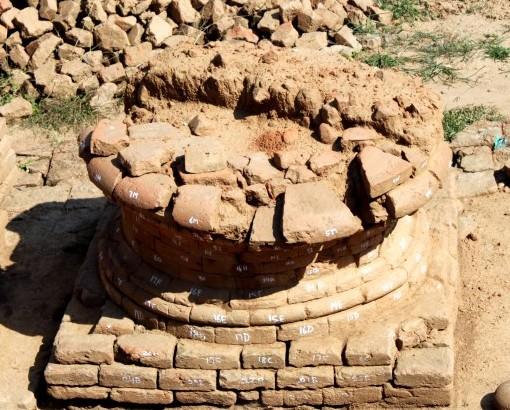 The most significant and distinguished Buddhist bricks structure Spoked-Wheel (Dharmachakra) Stupa was unearthed during the scientific clearance work at the site in the year 2008–10, exposing the remains of its platform with missing super structure. The structure is the first to be found in Jammu and Kashmir State, the northernmost part of India.

The exposed bricks structure, according to the information provided by ASI, is similar to famous excavated Stupa of Nagarjunakonda (found in Andhra Pradesh, South India) and Sanghol (found in Punjab, North India). 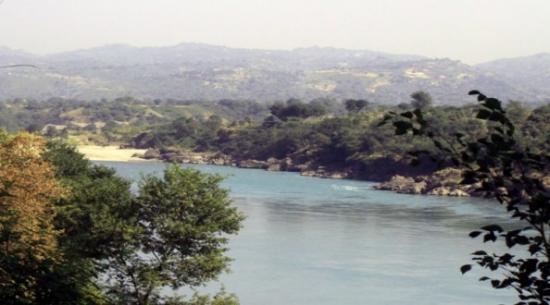 The river Chenab: The Ambaran site is located on the right bank of the river. (Venus Upadhayaya/Epoch Times Staff)

The archaeological site is locally known as Pambaran, lies north-west of Jammu city on the right bank of river Chenab, just one kilometer away from the northernmost remains of Harappan and pre-Harappan civilization site which now lies within the precincts of the local Akhnoor city’s fort.

The site seems to be abandoned around the 7th century A.D., mainly due to the flash flood and the decline of Buddhism in the area