What’s new from Ancient Amarna? The way research progressed in Akhenatan’s capital  during the summer of 2015 is developed in detail in the newly published issue of Horizon, the Amarna Project and Amarna Trust newsletter.

Research during the project’s latest season focused on the Great Aten Temple, the site’s cemeteries and Kom el-Nana, an enclosure of the Amarna period lying isolated in the desert to the south of the main field of ruins and associated with Queen Nefertiti. 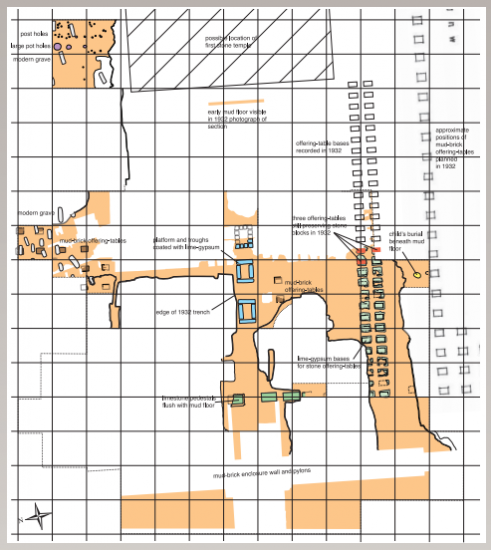 Plan of features uncovered on areas of the early temple floor. The irregular outlines follow the edges of later covering features and of trenches dug in 1932.

Starting with the Great Aten Temple, the Amarna Project was able to carry out a further examination of the front of the Temple and to extend the outlines, marked in new materials, of the original stone building. According to the report, two separate ground levels, one earlier and one later, have been exposed. Both share a common feature: a line of small rectangular platforms surrounded by shallow troughs or basins, each set coated with a thick layer of lime-gypsum plaster, although in the earlier layout, numerous offering-tables made from mud bricks were also present. The structure has been interpreted with some security as a place to prepare the dead. In addition, during this season, a new area of excavation on the north side of the temple revealed an altogether different set of features on the early ground surface: post holes for wooden constructions and larger, deeper holes where pottery jars had been buried. 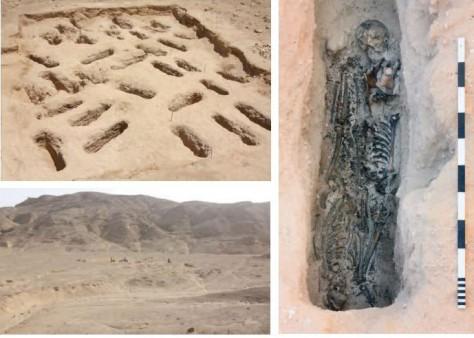 Cemeteries’ research actually consisted Phase 2 of a a long-term study that started in 2005 and focuses on better understanding the health, life experiences and beliefs of the people of Akhetaten through an integrated study of human remains and burial practices. As of Spring 2015 the Project focused on the North Tombs Cemetery, where total of 85 graves were excavated over six weeks, with 115 individual numbers assigned. A study of the human remains located led to the preliminary conclusion that “the burials within the areas excavated represent a somewhat different or more restricted portion of the Amarna population than was found at the South Tombs Cemetery; namely, one that is young, relatively poor and involved in extremely heavy labour from an early age. Many alternative explanatory frameworks need to be explored as the project continues”.

As for Kom el-Nana, the project aims more to its protection rather than its excavation. The site, excavated on and off, in between attempts by the locals to take parts of it for cultivation, had been protected by a barbed wire fence, which was later removed to enable the compromising by large agricultural encroachments that destroyed part of  its west side. According to a series of Google Earth images, the main encroachment took place between 17 October 2013 and 12 January 2014, confirming local reports which ascribed the act to the period of unrest which followed the removal from office of former President Mohammed Morsi in July 2013. Subsequent images show that the initial encroachment has not been expanded. With the agreement of the Ministry of Antiquities, the Amarna Project has begun a scheme to protect the parts of the site which remain untouched by agriculture, by surrounding the main part of the site with another but stronger barbed-wire fence, which will start getting erected this month (October 2015).