Heretic Pharaoh Akhenaten's capital was no paradise for many adults and children. 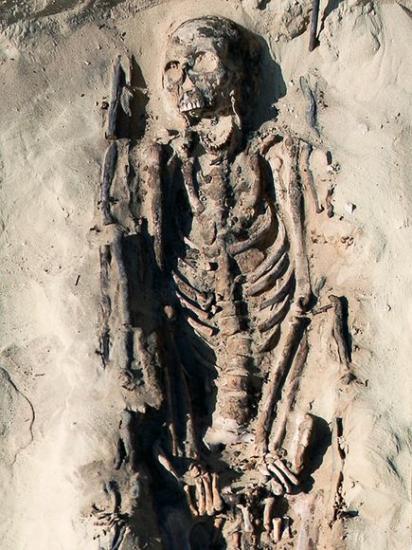 Among those buried in Amarna's commoners cemetery is a man who was roughly 19 years old when he died.  Photograph courtesy Amarna Trust

Carvings on the walls of the ancient Egyptian city of Amarna depict a world of plenty. Oxen are fattened in a cattle yard. Storehouses bulge with grain and fish. Musicians serenade the pharaoh as he feasts on meat at a banquet.

But new research hints that life in Amarna was a combination of grinding toil and want—at least for the ordinary people who would have hauled the city's water, unloaded the boats on the Nile, and built Amarna's grand stone temples, which were erected in a rush on the orders of a ruler named Akhenaten, sometimes called the "Heretic Pharaoh."

Researchers examining skeletons in the commoners' cemetery in Amarna have discovered that many of the city's children were malnourished and stunted. Adults show signs of backbreaking work, including high levels of injuries associated with accidents.

"We have evidence of the most stressed and disease-ridden of the ancient skeletons of Egypt that have been reported to date," said University of Arkansas bioarchaeologist Jerome Rose (a National Geographic Committe for Research and Exploration grantee), one of the team of experts examining the dead. "Amarna is the capital city of the Egyptian empire. There should be plenty of food . . . Something seems to be amiss."

Amarna was the capital city conjured out of the desert sands in roughly 1350 B.C. by Akhenaten, husband to the famous Queen Nefertiti and likely father of King Tut. Akhenaten rejected the crowded cast of Egyptian gods in favor of the worship of just one, the Aten, or sun god. At Akhenaten's command, the city of Amarna was built some 200 miles (322 kilometers) south of modern Cairo as a place where Aten could reign supreme.

Of the 20,000 to 30,000 people who lived at Amarna during its brief heyday—about 15 years—perhaps ten percent were the wealthy elite, who lived in spacious villas and had lavishly decorated tombs built for them. The rest ended their days in what is known today as the South Tombs cemetery, where most were buried in tightly packed graves marked by piles of rocks.

Secrets From the Graves

In the current issue of the journal Antiquity, the Amarna Project team reports excavating more than 200 graves at the South Tombs site and finding only 20 coffins. Most of the skeletons are instead rolled in stick mats—a likely sign of modest means in a society that deemed coffins highly desirable. One of the cemetery's few coffins is painted with hieroglyphics that can't actually be read, suggesting that the coffin artist, and perhaps the person who commissioned the coffin, were illiterate.

Nor do the tombs contain many of the grave goods found in wealthier burials. The ordinary people of Amarna couldn't have afforded much, but the bareness of their burials may also indicate that grave goods were becoming less important at the time, said archaeologist Anna Stevens, assistant director of the work at the site. Among the few objects found in the graves are three hippopotamus-shaped beads, probably worn by a woman or child before death as protective amulets.

The children of Amarna apparently needed all the protection they could get. Skeletons from those between the ages of 3 and 25 at the time of death show signs of scurvy and rickets, according to research that Kathleen Kuckens, a University of Arkansas student working with Rose, will present at an anthropology meeting in April.

Kuckens will also report that the children's teeth are grooved, a telltale mark of malnutrition. Children older than about 8.5 years showed signs of serious stunting, according to preliminary data that University of Arkansas graduate student Ashley Shidner will also present at the April meeting. It seems likely that those children weren't properly nourished and were engaged in abnormally high levels of physical activity. The children's skeletons show evidence of the constant use of muscles, Shidner said.

Amarna's adults had it no easier than the children. More than 75 percent of the skeletons studied in detail had arthritis in their limbs or spines, suggesting hard labor. Fractured and compressed vertebrae were common, and 67 percent of the skeletons showed signs of at least one healing or healed fracture. Those rates are "really high" and "indicate a high workload," said osteoarchaeologist Jessica Kaiser of Ancient Egypt Research Associates, a group that is excavating around the pyramids of Giza.

It may be no coincidence that Amarna was built using a recent innovation: a standardized stone building block now known as a talatat, which weighed nearly 155 pounds (70 kilograms) and was judged to be light enough for one worker to carry. A carved scene that probably originated at Amarna shows a man balancing a talatat block across his shoulders, bracing it with both hands. Perhaps, the researchers speculate, hefting stones like that contributed to the high degree of arthritis among Amarna's workers.

Not all experts think the workload of Amarna's workers was exceptional, though. Skeletons at the ancient Egyptian cemetery called Saqqara also show frequent signs of trauma and physical activity, said Andrew Chamberlain, a University of Manchester bioarchaeologist who has studied the Saqqara remains. Rose responded that although he hasn't seen data for every ancient Egyptian population, many populations show lower levels of workload-related stress than the Amarna common folk do.

After Akhenaten died in about 1336 B.C., Amarna was quickly abandoned. But the South Tombs cemetery has remained to provide a reality check on the propaganda of the pharaoh who hoped to build a place that would be a "House of Rejoicing" for the sun god.

"Amarna was supposed to be this great city where everyone would prosper," said Shidner. "But it wasn't quite the happy place that Akhenaten was making it out to be."