Furred arteries have been affecting human health for at least 3,000 years, new research by a North East academic has found 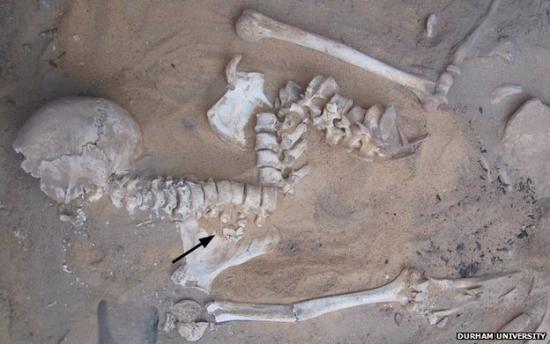 Furred arteries have been affecting human health for at least 3,000 years, new research by a North East academic has found.

Ancient African skeletons have been discovered with atherosclerosis, a thickening of the artery wall due to fatty build-up and a major factor in cardiovascular disease - the leading cause of death today.

Doctors blame our modern lifestyle with smoking, obesity and hypertension commonly the cause.

But the condition was also prevalent 3,000 years ago among the simple farming communities who worked the land by the Nile in what is now Sudan.

Last month Michaela Binder, a Durham University PhD bioarchaeologist, revealed evidence of metastatic cancer in a skeleton in the area dating back to 1200 BC. Now she has reported three male and two female skeletons buried in the same group at Amara West, 466 miles (750km) north of Khartoum, that show evidence of furred arteries.

Among the bones preserved in the sands, she found tiny calcified plaques which would once have lined the arteries, constricting blood flow and possibly causing stroke or thrombosis.

The study is published in the International Journal of Palaeopathology, and forms part of a British Museum archaeological project.

Ms Binder said: “Very little is known about atherosclerosis in past human populations because it is very difficult to find evidence in skeletal human remains. Calcified arterial plaques in these 3,000-year-old skeletons show that atherosclerosis is not only a problem of modern lifestyle but may also be related to inflammation, genetic background and ageing in general.

“Insights gained from archaeological remains like these can really help us to understand the evolution and history of modern diseases.”

The skeletons were believed to have died between 1300 and 800BC. They were aged 35-50 - relatively old for the time - and were of high and low social status.

It was impossible to say whether atherosclerosis played a part in their deaths. It was possible smoke was a factor in them developing the condition, as locals used large fires to cook and to make pottery and metalwork.

Their poor dental health may also be linked, just as gum disease in modern times may be an indicator of cardiovascular conditions.

Co-author Professor Charlotte Roberts, a world-leading palaeopathologist at Durham University, said: “This find is very rare. Along with the man with cancer, already reported, this contributes to knowledge about the history of cancer and heart disease, and shows how these diseases have been plaguing the world’s population for a long time.”

Ms Binder added: “The main relevance of these findings is that it shows us that the factors leading to these diseases are not products of modern life but that there are other factors in the environment which may have been around for many thousands of years.”