Remains of suspected female of Turkik origin found in at an altitude of 2,803 metres in the Altai Mountains.

'The finds show us that these people were very skilled craftsmen.' Picture: Khovd Museum

The ancient human remains are wrapped in felt but the excavation is being hailed as the first complete Turkik burial found in Central Asia. B.Sukhbaatar, researcher at Khovd Museum, said: 'This person was not from elite, and we believe it was likely a woman, because there is no bow in the tomb.

'Now we are carefully unwrapping the body and once this is complete the specialists will be able to say more precisely about the gender.' 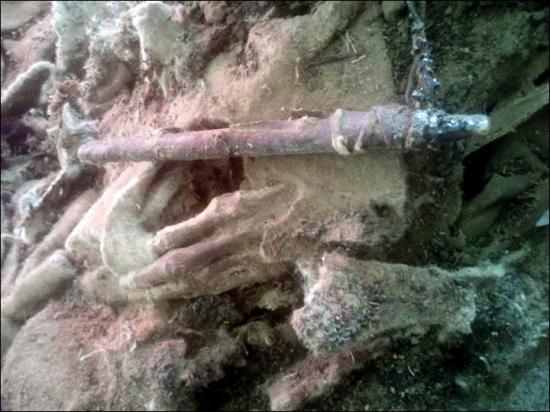 'Now we are carefully unwrapping the body and the specialists could say more precisely about the gender.' Pictures: Khovd Museum

There were also pillows, a sheep's head and felt travel bag in which were placed the whole back of a sheep, goat bones and small leather bag for the cup.

He said: 'It is the first complete Turkik burial at least in Mongolia - and probably in all Central Asia. This is a very rare phenomenon. These finds show us the beliefs and rituals of Turkiks.

'We can see clearly that the horse was deliberately sacrificed. It was a mare, between four and eight years old. Four coats we found were made of cotton. 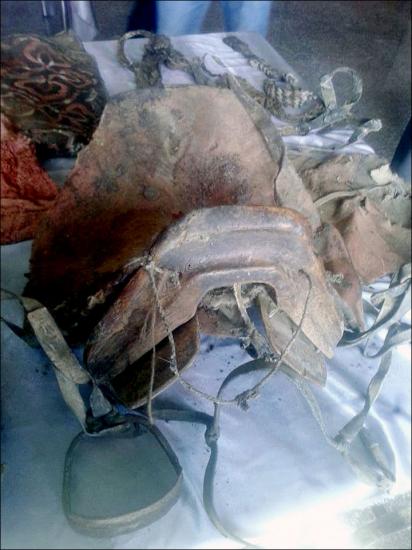 Elaboated embroidery on the bag and a saddle - all very good preserved. Picture: Khovd Museum

'An interesting thing we found is that not only sheep wool was used, but also camel wool. We can date the burial by the things we have found there, also the type of hat. It gives us a preliminary date of around the 6th century AD.'

Archeologists from the city museum in Khovd were alerted to the burial site by local herdsmen. The finds will help form a deeper understanding of the native Turks in ancient Mongolia.

'The grave was located 2803 meters above sea level,' said B.Sukhbaatar. 'This fact and the cool temperatures helped to preserve the grave. The grave was three metres deep.

'The finds show us that these people were very skilled craftsmen. Given that this was the grave of a simple person, we understand that craft skills were rather well developed.'

The Altai Mountains unite Siberia, in Russia, and Mongolia, China and Kazakhstan.