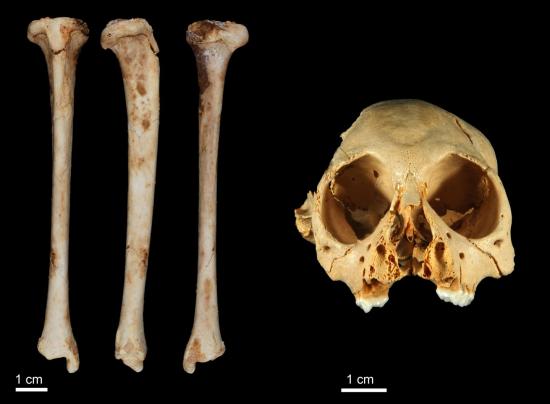 An international team of scientists have dated a species of fossil monkey found across the Caribbean to just over 1 million years old.

The discovery was made after the researchers recovered a fossil tibia (shin bone) belonging to the species of extinct monkey Antillothrix bernensis from an underwater cave in Altagracia Province, Dominican Republic. The fossil was embedded in a limestone rock that was dated using the Uranium-series technique.

In a paper published this week in the well renowned international journal, the Journal of Human Evolution, the team use three-dimensional geometric morphometrics to confirm that the fossil tibia does indeed belong to Antillothrix bernensis, a primate that we now know existed on Hispaniola relatively unchanged for over a million years. This monkey, roughly the size of a small cat, was tree-dwelling and lived largely on a diet of fruit and leaves.

Dr Helen Green of Melbourne University's School of Earth Sciences, a lead researcher involved in the dating of the limestone surrounding the fossils, said the question of the age of primate fossils from this region has puzzled scientists since the days of Darwin and Wallace.

'The presence of endemic new world monkeys on the Caribbean islands is one the great questions of bio-geography and our work on these fossils shows Antillothrix existed on Hispaniola relatively morphologically unchanged for over a million years. By establishing the age of these fossils we have changed the understanding of primate evolution in this region.' said Dr Green.

At Brooklyn College, part of the City University New York, and Northeastern Illinois University researchers, Prof. Alfred Rosenberger and Dr Siobhán Cooke have been working in the Dominican Republic since 2009, searching for rare fossil remains of endemic mammals to investigate how these animals were adapted to their unique, island environments. 'Very little was known about the native monkey from this island' said Dr Cooke, 'Prior to our discoveries in Altagracia we knew almost nothing even though this species was first described by Renato Rímoli back in 1977'.

To better understand how this primate was uniquely adapted to its environment, Dr. Melissa Tallman and her student Andrea Morrow, from the Grand Valley State University, used a specialized technique to model the three-dimensional shape of the monkey's leg bone. This helped them to reconstruct how the small primate might have moved about in its environment and allowed the comparison of relatively young examples of Antillothrix bones to the newly discovered million year old specimens.

At the University of Melbourne, Dr Helen Green and Dr Robyn Pickering worked in the state of the art Isotope Chronology Laboratory in the School of Earth Sciences, where they measured the levels of uranium, thorium and lead present in the limestone rocks today using the results to calculate an age of 1.3+-0.11 million years.

This discovery was made possible by the collaboration between the Dominican Speleological Society, the Museo del Hombre Dominicano in Santo Domingo, and Brooklyn College, CUNY. Cave divers, Cristian Pittaro, Phillip Lehman, Dave Pratt, and Victoria Alexandrova were responsible for this incredible find within Padre Nuestro Cave. Today these caves are underwater, making them a challenging environment to search for fossils in, meaning that team work is essential.