Troas was one of the biggest settlements in the ancient era aside from Constantinople. After losing the competition to become the capital of the capital, the city began to lose importance. 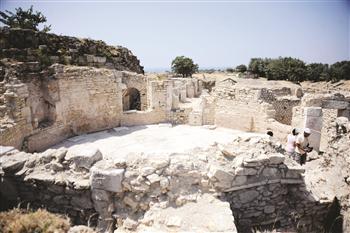 The city began losing its importance, it became an area for wanderers as well as pirates. AA photo

An ancient city located close to the Dalyan village, by the coast of the Marmara Sea in the northwestern province of Çanakkale’s Ezine district, was a rival of Constantinople and was at one point set to become the capital city of the Eastern Roman Empire.

Ankara University member and the head of excavations in the ancient city of Alexandria Troas, Associate Professor Erhan Öztepe, said the city was established in 311 B.C. and maintained its existence until the 9th century as a large settlement area. “There are some features that make the city important. One of them is its location. Bozcaada Island is right across from the city. It has a wall of 8,200 meters. Some parts of these walls survive today and can still be seen. The settlement inside the walls is a 5,000 square-meter area of land,” Öztepe said.

He added that the city maintained its importance until the 4th century, and the population of the city was approximately 100,000 at its height, a significant figure in ancient era. “There were discussions in the 4th century about the capital of the Eastern Roman Empire: Constantinople or Alexandria Troas? This city had opportunities to compete against Constantinople, but when Constantinople became the capital, it began to lose its importance. Among the most important reasons that interest in the city fell were the earthquakes, which happened one after the other,” he said.

Öztepe said that after the city began losing its importance, it became an area for wanderers as well as pirates. “Excavations show us the places where these people accommodated themselves here,” he said, adding that the coast around Alexandria Troas was still a point where mariners approaching the Dardanelles sometimes take shelter.

Öztepe added that material from the city was used in the architectural masterpieces of the Ottoman era, and that legendary Ottoman admiral Piri Reis provided information about the city in his books.