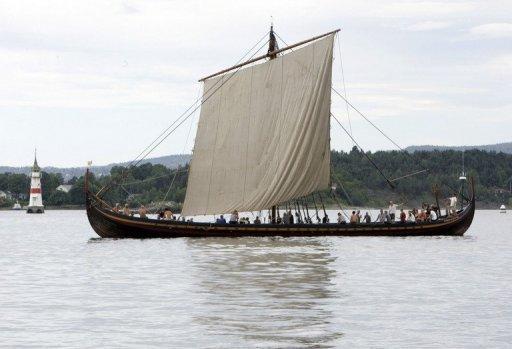 An oblong crystal found in the wreck of a 16th-century English warship is a sunstone, a near-mythical navigational aid said to have been used by Viking mariners, researchers said on Wednesday.

The stone is made of Iceland spar, a transparent, naturally-occurring calcite crystal that polarises light and can get a bearing on the Sun, they said.

It was found in the remains of a ship that had been dispatched to France in 1592 by Queen Elizabeth I as a precaution against a second Spanish Armada but foundered off the island of Alderney, in the Channel.

British and French scientists have long argued that the find is a sunstone—a device that fractures the light, enabling seafarers to locate the Sun even when it is behind clouds or has dipped below the horizon.

Sunstones, according to a theory first aired 45 years ago, helped the great Norse mariners to navigate their way to Iceland and even perhaps as far as North America during the Viking heyday of 900-1200 AD, way before the magnetic compass was introduced in Europe in the 13th century. 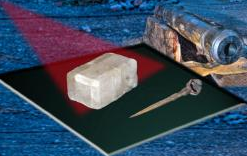 But there is only a sketchy reference in ancient Norse literature to a "solarsteinn," which means the idea has remained frustratingly without solid proof.

In a study published in the British journal Proceedings of the Royal Society A, investigators carried out a chemical analysis on a tiny sample, using a device called a spectrometer, which confirmed that the stone was a calcite.

The stone is about the size of a small bar of soap whose edges have been trimmed at an angle. In technical terms, its shape is rhombohedral.

It is milky white in appearance, and not transparent, but the new experiments show that this is surface discolouration, caused by centuries of immersion in sea water and abrasion by sand, the study said.

Using a transparent crystal similar to the original, the scientists were able to follow the track of the setting Sun in poor light, with an accuracy of one degree. In a second experiment, they were able to locate the Sun for 40 minutes after sunset.

Other factors provide evidence that this is a sunstone, according to the investigation, led by Guy Ropars of the University of Rennes, in France's western region of Brittany.

The crystal was found in the wreckage alongside a pair of navigation dividers. And tests that placed a magnetic compass next to one of the iron cannons excavated from the ship found that the needle swung wildly, by as much as 100 degrees.

Put together, these suggest the sunstone may have been kept as a backup to a magnetic compass.

"Although easy to use, the magnetic compass was not always reliable in the 16th century, as most of the magnetic phenomena were not understood," says the study.

"As the magnetic compass on a ship can be perturbed for various reasons, the optical compass giving an absolute reference may be used when the Sun is hidden."

The authors also note previous research that some species of migrating birds appear to have used polarised light from the sky as a navigational aid or to recalibrate their magnetic compass around sunrise and sunset.

How does the sunstone work?

If you put a dot on top of the crystal and look at it from below, two dots appear, because the light is "depolarised" and fractured along different axes.

You then rotate the crystal until the two points have exactly the same intensity or darkness.

"At that angle, the upward-facing surface of the crystal indicates the direction of the Sun," Ropars told AFP in an interview in 2011, when preliminary research about the Alderney stone was published. Journal reference: Proceedings of the Royal Society A