Al-Sabiya (Kowait) : Findings are key to solving mysterious puzzles of the early civilizations

A treasure trove of artifacts have been unearthed in north Kuwait during the last five years by a Polish archeological mission, an expert said. Speaking at a press conference held at the Polish Embassy in Jabriya, Dr Piotr Bielinski, Head of the Polish Archaeological Mission said that the findings may lead to solving 'archeological puzzles' that befuddled many observers and archaeologists. 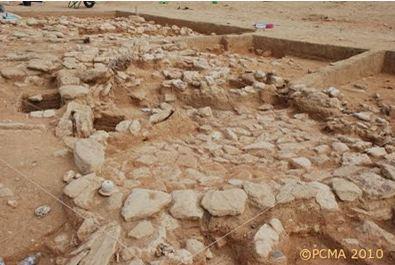 "We believed that Al-Sabiya (formerly known As-Sabiya) desert findings are key to solving mysterious puzzles of the early civilizations that reconnect several archeological findings which were discovered earlier in Kuwait," he said.

Bielinski was referring to the Al-Sabiya pre-historic settlement which was earlier brought to light by Kuwaiti archaeologists a few years ago. They are now being excavated by Bielinski's group only to reveal more settlements, gravesites and other exciting discoveries. The archaeological mission which began its task in the spring of 2007 was specially appointed by the Kuwaiti National Council for Culture Arts and Letters [Department of Antiquities] through an agreement to help uncover the past.

The mission from the Polish Center of Mediterranean Archaeology University of Warsaw, found more pre-historic gravesites, wells, settlements containing valuable potteries, jars, bowls and pearl beads which they belonged to the Ubaid period [about c. 4800-4500 BC].

"As-Sabiya has a lot of charm and exquisiteness to offer. We found several settlements, graves and plenty of potteries and tools which surprised us a lot. We are really stunned and amazed by our discoveries which would perhaps lead to answering several questions which were left unanswered over many years," he added.

The archeological sites are located in Bahra, Mugheira, Muheita and Dubaij areas - all sites are located a few meters and kilometers away from each other, a clear indication that society of hundreds of people once lived or settled there.

"The settlements found were typical of Ubaid period. They are buried from .20 meters up to 4 meters of sand. The archaeological findings are believed to be connected to early human civilizations which settled there from Mesopotamia (Iraq). You will see walls built of stone beneath the surface of the desert, that is typical of Ubaid period," he asserted.

The rooms inside the settlements contain numerous archeological treasures. In one settlement, decorated shells and some jars or potteries were found.

"Some of the findings are easy to interpret but many are hard. Some objects are made from stones while others are made of clay. We found polishing tools that are difficult to explain. We believe that a bigger settlement was once used to mass produce products which they probably transported to Mesopotamia. But those are speculations, we don't know maybe it was a market place or a production room," Bielinski continued.

But why [live] in the middle of the desert? Why in Al-Sabiya area? We don't know yet; they needed support to live or survive in the dessert. Lots and lots of questions are raised and remain unanswered and we will continue to study further to get the right answer," he added. Bielinski expressed gratitude to Kuwaiti authorities for funding the Polish mission dedicated to helping countries throughout the world to conduct archaeological research, both in excavation and study projects, to be able to conserve, reconstruct and restore archaeological sites in different parts of the world.

"Our role here is to provide the brains, hands and goodwill to Kuwaiti people; but everything we do is properly coordinated with Kuwait authorities; uncovering history which will benefit not just Kuwait, but human civilizations in general," he said.

He expressed hope that the former settlements could be reconstructed to revive its former glory, in addition to studying previous climate, animals and environment of the past. Shehab Ahmad Al-Shehab, Director Department of Antiquities, noted that the Polish Archaeological Mission deserves Kuwait's commendation.

"We appreciate the Polish Archeological Mission. Thank you for your cooperation, and we hope that this scientific work will answer many questions of the past and that we will be able to re-connect the puzzles," he stated. Janus Szwedo, Polish Ambassador to Kuwait welcomed the press and introduced the team to reporters.