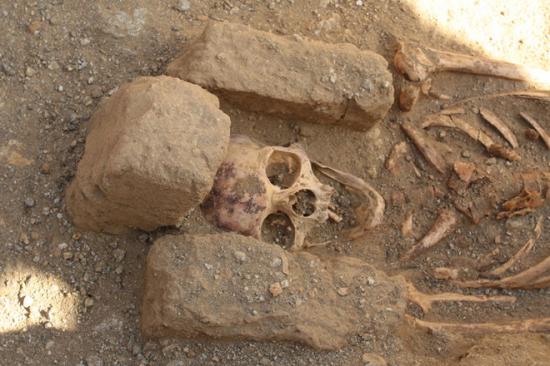 The skeletons found in "cemetery two" at al-Ghazali in Sudan were all males, suggesting monks who lived in the nearby Christian monastery were buried there. Credit: Photo courtesy Robert Stark

Four cemeteries, from which at least 123 individuals have been excavated so far, have been unearthed near the remains of a medieval Christian monastery in Sudan. A few of the burials contained individuals buried in unusual ways.

The cemeteries and remains, which have been excavated over the past two years, are located at a monastery called al-Ghazali near the Nile River. The people who were buried there lived about 1,000 years ago, during a time when a series of Christian kingdoms flourished in the area, according to Robert Stark, a doctoral student at McMaster University in Hamilton, Ontario, who presented the findings this month in Toronto at the joint annual meeting of the Archaeological Institute of America and the Society for Classical Studies.

The discoveries include well-preserved burial shrouds that in a few instances still cover the skulls of the deceased, Stark said. The archaeologists also found tombstones with engravings of prayers that were written in Greek or Coptic (an Egyptian language that uses the Greek alphabet). In one cemetery, some people were buried in mysterious ways: For example, two individuals were found with post-mortem cut marks incised in their bones. [See Photos of the Massive Burial Ground and Monastery]

Stark is part of an archaeological expedition of the Polish Centre of Mediterranean Archaeology, at the University of Warsaw, which is excavating al-Ghazali.

An archaeologist named Peter Shinnie first excavated the cemeteries at al-Ghazali in the 1950s, Stark said. While Shinnie believed al-Ghazali held more than 1,000 burials, he uncovered just a few during the course of his fieldwork. The Polish Centre of Mediterranean Archaeology is the first organization to conduct large-scale excavations at al-Ghazali's cemeteries, he added.

One of the cemeteries consists almost entirely of adult males and was probably used by the monks from the monastery, Stark said. Two cemeteries contain a wider mix of individuals and appear to have been used by people who lived in nearby settlements. The fourth cemetery was discovered recently by archaeologists and contains only 15 burials — and some of those have features that are unusual.

The writing on the tombstones tended to follow a particular format. "To make it simple. The writing on tombstones can be divided into two parts," Artur Obluski, the director of the excavations at al-Ghazali, told Live Science in an email.

The first part consisted of prayers, which included "a prayer for the soul of the deceased, a prayer to the Providence of God, the God himself often described as merciful," Obluski said. These prayers ask "that the soul will be taken care of and can rest on the bosom of Abraham, Isaac and Jacob or in the world of the Living."

The second part of the tombstone engravings "contains some individual information of the deceased: his name, age at the time of death, sometimes titles he bore during his life time — so-called cursus honorum — and professions he performed," said Obluski.

"All the indicators [are] that this happened when the bones were still quite fresh," Stark said during his presentation, noting that there are no signs that the bones were made by scavenging animals. It's possible that the cut marks were created during some form of defleshing, Stark said.

There were other individuals in the cemetery who were found to be buried in unusual ways. For instance, one person's legs were lying at a 45-degree angle, with the person's right arm dangling across his or her head. This person was buried in a "haphazard" way, Stark said, despite the fact that the person's grave was neatly dug into the ground and a stone structure was apparently built above it.