Ajnala (Inde): A matter of martyrs 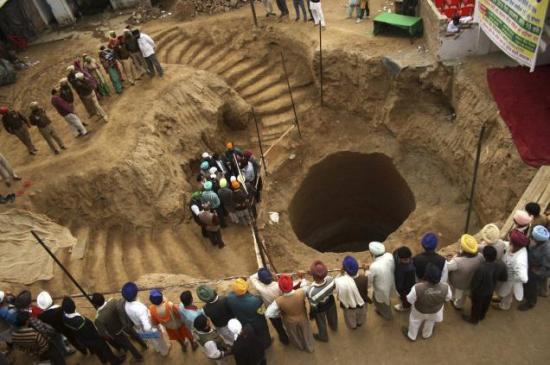 The well of martyrs - PTI

On August 1, 1857, 282 sepoys of the Indian Army were massacred in Ajnala, Amritsar. The writer traces their story to the present day, when their remains were dug out by locals to be cremated with honours.

July 31-August 1, 1857. It was the day of Bakrid (Id-ul-Fitr). Two hundred and eighty-two sepoys of the Indian army, who rebelled against the British colonial occupation of India, were massacred and dumped into a dry well 100 yards from the Ajnala police station in Amritsar district. The remains were dug out recently by the town people themselves, without any governmental help. At the time of this article going to press, the cremation was scheduled to take place on August 1. The Punjab Government has allotted a plot of land for the cremation, and a memorial will be built on it later.

Two accounts are available about the Ajnala incident. One was the colonial version of Frederic Cooper, the then Deputy Commissioner of Amritsar district, whose book The Crisis in the Punjab from the 10th of May Until the Fall of Delhi was published in 1858 from London. The other, published in the 1920s, was a nationalist version, by Giani Hira Singh Dard, a respected Punjabi writer, historian and editor of the Punjabi magazine Phulwari from Amritsar. His version was carried with photographs in the November 1928 Fansi Ank (Execution Issue) from Allahabad, and it was later included in the nationalist historian and editor Pt. Sunder Lal’s proscribed book Bharat Mein Angrezi Raj (British Rule in India). Giani Hira Singh Dard had recorded the eyewitness account of Baba Jagat Singh, who was nearly 95 in 1928 and was in his twenties at the time of the massacre.

Rebellion broke out in Meerut on May 10, 21 days ahead of the decided date. As per Cooper’s account, thousands of Poorbeah sepoys — of the 26th Regiment of Bengal Native Infantry — were disarmed in Lahore’s Meean Meer Cant. The rebellion spread in different regions of Punjab, which Cooper spelled as Lahore, Umritsur, Phillour, Jhelum, Sealkote, Jullundur, Ferozepore, Sirsa, Hote Mardan, Peshawur and Loodhianah [Lahore, Amritsar, Phillaur, Jhelum, Sealkote, Jalandhar, Ferozepur, Sirsa, Hote Mardan, Peshawar, Loodhianah]. The British Government with support from feudal chieftains of Patiala, Jind, Kapurthla and Kashmir, hundreds of mutineers were ‘slaughtered’ in the term used by Cooper himself in different areas of Punjab. Cooper proudly and teasingly counts the killings of mutineers in August 1857 in Peshawar area to 659. “Some idea may be gathered of the terrific and swift destruction, when it is remembered that the strength of the regiment before the mutiny amounted to 871. The Punjab Infantry shot and killed 125; Captain James’ party killed 40; Lieutenant Gosling’s party killed 15. The Peshawur Light Horse, the villagers, and H.M.’s 27th and 70th killed 36. By sentence of drum-head court-martial, on the same day, there were executed by H. M.'s 87th, 187; and by a similar summary tribunal, on the 29th of August, 167; also on the same date, 84; one thanahdar killed five: total, within about 30 hours after the mutiny, no less than 659!(The Crisis in Punjab, Frederic Cooper, Page 177, Elder and Son, Smith, London, 1858) On July 30, nearly 500 disarmed sepoys rebelled near Ajnala. One of them — Prakash Singh, alias Prakash Pandey — killed Major Spencer with the Major’s own sword, and they all fled south, only to be trapped near Ajnala, by Tehsildar Dewan Pran Nath’s agents, who alerted the district administration. Armed forces arrived and rained bullets. Many people jumped into the river near the village of Daddian and drowned. Others were taken to the Ajnala police station to be hanged, while some were forced into a dungeon. Deputy Commissioner Cooper had ordered a long rope. The rebels were to be killed on the night of July 31. Due to rain, the execution was postponed until the next morning.

On August 1, 237 rebel sepoys were taken out to an open ground in front of the police station and killed in turns of 10. When those in the dungeon did not show up, it was found that 45 of them had suffocated to death. The 282 bodies were thrown into a dry well, 100 yards from the police station. The well was filled with sand. Cooper called it ‘rebel’s grave’ and wanted that written in Persian, Gurmukhi and English. At two places in his book, he compares this well to Holwell’s Black Hole of Calcutta of 1756 and the well of Cawnpore of 1857, where rebels dumped the bodies of British officials. Cooper’s glee on attaining revenge is evident. “There is a well at Cawnpore, but there is also one at Ajnala!” The well was in place till 1972, inscribed with the words Kalian Wala Khuh (The Well of Blacks).

In 1928, it looked like a raised sand hill. In 1957, the centenary celebrations of 1857 were observed here in the presence of the then Chief Minister Pratap Singh Kairon. However, in 1972, villagers built a room over the well and turned it into a Gurdwara. In 2007, the 150th anniversary of the 1857 killings was observed at the site.

In 2012, the town people formed an 11-member committee of all practising Sikhs, led by trade unionist Amarjit Singh Sarkaria, to honour the martyrs by disinterring their remains from the well. They built a new Gurdwara nearby and began digging of the well on February 28, 2014. Before beginning the work, they tried their best to involve the State and Central Governments, but their efforts were futile as no agency, including the Archaeological Survey of India showed interest. Within three days of digging, nearly hundred human skulls, teeth and bones were exhumed. Hundreds of volunteers took part in the digging and thousands gathered to watch. Medals, jewellery and coins were also retrieved.

Officials from the administration and the Archaeology department turned up to collect the remains for DNA testing.

The managing committee renamed Kalian Wala Khuh as Shaheedan Wala Khuh (Martyr’s Well) and appealed to the Governments of Punjab and India to give them the vacant land nearby, under the control of the army, for the cremation.