Archaeological work in Aiden Qiaolu has been begun to investigate and survey since 2010 and was excavated in 2011 for the first time. From June to September, 2012, settlement and cemetery were excavated. The settlement was consisted of three houses, connected with each other, i.e., F1 to F3. In addition, other tombs including nine stone-slab-lined tombs were excavated as well. A total of 1,500 square meters was revealed yielding numbers of ceramics, stone, copper/bronze, gold earrings and stone statue and so on. 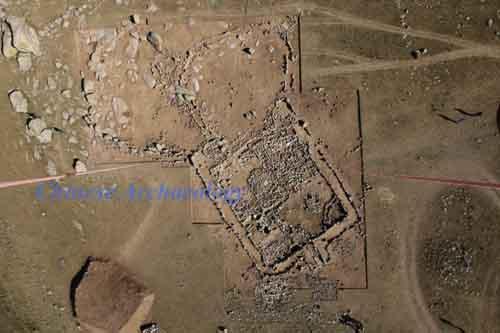 This site lay on Alatao Mountain’s Chaganwusu mountain lower area to the south. On the basis of primary investigation and surveys, the site was contained within seven square kilometer, and located in a hill area which is in front of the Alatao Mountain, flat and elevated. The elevation of the top of the hill is ca. 2525 meters, there are seasonal rivers and springs in the both sides of the hill. The stone architectures, totally 11 groups, are distributed around the four directions of the hill. Stone-built architecture was marked by double stone circles with large stones. Such stone circles measure ca.8～22 meter long, in square or irregular shape. There are also stone-enclosed architectures in other forms around the hill. 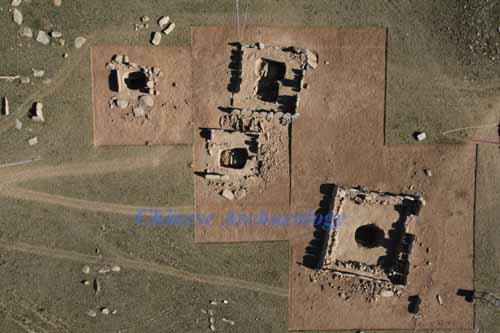 In the southern part of the hill to the west, there has been a large stone-enclosed architecture cluster, i.e., No.1. This cluster is consisted of four-step from bottom to the top, five stone-built structures, i.e., F1 to F5. Such architecture was constructed to double circles with large stones. For example, of the three houses excavated in 2012, F1, in shape of rectangular, consisting of double stone circles with large stones, has a stone-built dromo projecting exterior to the south. This architecture measures from 18 to 22 meter in length, from 14.6 to 18 meter in width. The distance between these two stone circles measures 0.98 to 1.33 meter. The foundation (F1)’s walls may have been constructed with large erecting stones, 0.3 to 1 meter high above the ground. Few large stones may have been manual-manufactured, and with its longest one, ca. 3 meter, 1.1 meter above the ground. The features within the stone structure may have been planned to two parts, each of which could be separated into two sub-divisions according to the central axis, indicating different functions. Within the structure, in the southeastern corner and southwestern corner, there was a stone circle separately and independently with the shape of a quarter circle, in which there was double stone circles in southeastern corner. Within the stone structures were unearthed a few animal bones, ceramic shards, and pure grey clay. Otherwise, several storage pits have been found within the house structure F1. 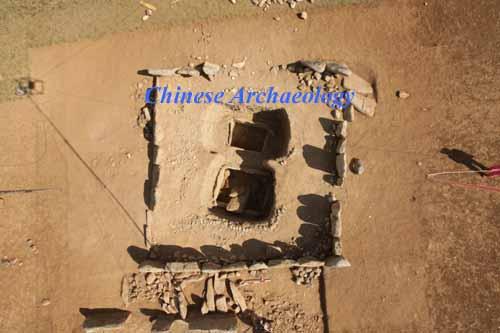 To the north of F1 were situated other such structures, F2 and F3. Next to F1 with its southern side connected to F2, and to its northeast, F2 is consisted of double stone circles. In the middle of the structure remains two large slabs. The stone circle, in shape of irregular oval, measures more than 17 meter long, more than 14 meter in its widest place. F3 is situated to the northwest of F1 in oval shape, with its longest diameter 17.8 meter. The stone circle of F3 on its eastern side was connected with western wall of F2. There may have been a clear gap, suggesting a dromo, found in the center of the western side of F3. 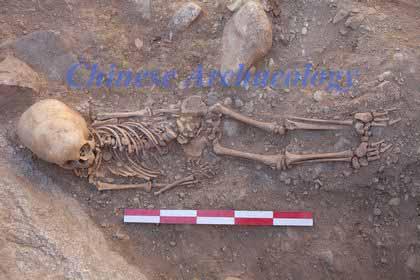 To the south of the entire site, the cemetery is 1800 meter far away from the hill where the house foundation was located. The longer side of the cemetery may have been more than 500 meter. Based on the density of grave distribution, the cemetery could be divided into three parts: north, center and south area. Now there may have been more than 60 tombs existing within the cemetery. Among them, most of them were stone-slab-lined tombs, and the others were stone mound. All of the stone-slab-lined tombs were consisted of stone enclosure and stone coffin. The largest stone enclosure ranges from 9.9 to 10 meter long. Nine tombs have been cleared up this year, part of which may have had 2 to 3 graves. 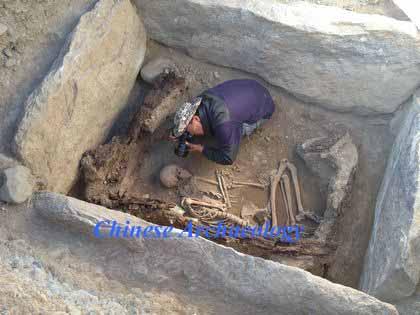 To the north of the cemetery, SM4 had square stone enclosure constructed by stone slabs, with each side, ca. 7 meter long. Within the tomb, there were two pits: one placed to the south, and the other opposite. The pits found with stone coffins were oriented the east-west direction. The mouth of the tomb pits were found with small pebbles, ca. 8 to 15 cm in size, which could be regarded as the entrances marks.SM4-1, oval shaft pit tomb, was found in the northern part of the SM4. The coffin was found sealed well, with the distance 1.5 meter from the tomb mouth. It was constructed by four slabs erected in four directions, covered with four larger stones, but lack of the bottom ones. The gaps between the coffin and pit were filled with broken pebbles and earth. Burned broken human bones were found at the coffin bottom. SM4-2 is situated in the southern part of the stone tomb; 30 cm away from the SM4-1.The pit of this tomb is in shape of rectangular, remaining the stone coffin in the bottom. The cover of the coffin consisted of pieces of stone flakes, on the flakes reserved with three cm thick yellowish clay. Within the stone coffin, wooden burial appliance were made with trunk, 13-15 cm in diameter, but had eroded. Five layers structure was recognized in the well-preserved wooden burial appliance, connected each other with tenon and joint. The dead buried in the coffin was 30-year-old male adult. The well-preserved skeletons lied on his side in contracted position, headed to the west and faced to north. The grave goods included gold earrings, pottery jars, sheep talus and etc. 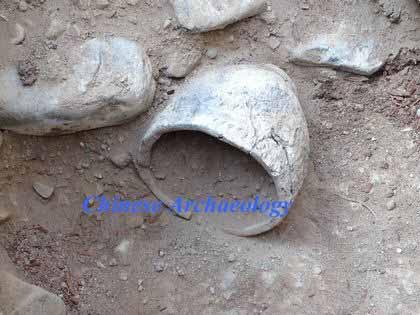 To the south of the cemetery, SM50 has rectangular stone enclosure, 7.1 meter in length, and 2.8-3 meter in width. The erecting stones of the tomb inclined interior. There were two burial pits within the stone enclosure, east-west direction, arranged from north to south. The stone coffin was built with large slabs. Of the two burial pits, one contained two coffins with burned human bones pieces remained, indicating cremation and there was a small pottery jar on the bottom of the tomb. The other tomb pit was found with dead body well-preserved. The death was analyzed to be female adult, ranging 25 to 30 years old, and laid on her side in contracted position. The dead body was lack of the trace of cranium, headed to the west. The skeleton was almost complete with exception of right lower limbs and skull. Within the same coffin, other infant skull, scapula and ribs pieces were revealed to the north of the adult bones, indicating that the tomb was joint burial with a female adult and her children. 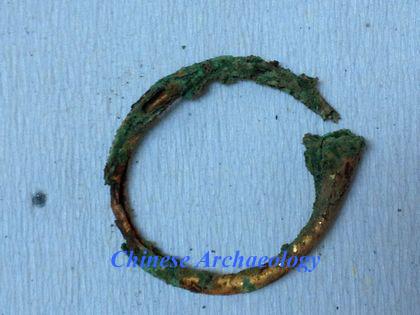 The cemetery and settlement of Aiden Qiaolu site could have been the significant remains of the Early Bronze Age in Xinjiang region, dating to 19 to 17 century BC. With the evidence of the architectural planning, scale, and feature of settlement, Aiden Qiaolu site may have been a center place, where the important rituals in the region of Bortala River took place, suggesting higher rank of the civilization.

The burial scale and funerary ceramics, gold rings and stone statue from the cemetery indicate the close connection with the regions around Dzungaria basins. The similar tombs were also seen in the north Alatao Mountain, and at Begazy in the region of Qihe of Kazakhstan. The work of Aiden Qiaolu site provides the essential important clue for the cultural understanding of the Early Bronze Age in Xinjiang and cultural interaction to the Central Asia.      (Translator: Sang Li)