Roman Iron Age artifacts and other finds may significantly alter the known history of an area near the northeastern shores of the Gulf of Finland.

A National Board of Antiquities archaeologist excavates at the Ahvenkoski harbor forge. The furnace was located between two stones, and in the ground one can see dark gray iron slag pieces. Image courtesy Jouni Jäppinen.

It was in the autumn of 2010 when local amateur archaeologists discovered evidence of harbor facilities thought to date from around 1000–1200 AD near Ahvenkoski village at the mouth of the western branch of the Kymi River in southeastern Finland. The findings included a smithy, an iron smelting furnace, and forceps, as well as hundreds of iron objects such as boat rivets similar to those found at Viking settlements in different parts of the Baltic, Scandinavia, Scotland and Iceland. Then, in 2011, a possible 2 x 3-meter-wide cremation grave was uncovered, confirmed later through rescue excavations by archaeologists from the Finnish National Board of Antiquities and through osteological analysis at the University of Helsinki. Artifacts included a battle axe, a knife, and a bronze buckle, all associated with burned human bones, initially thought to be dated to around 1000 - 1200 CE before analysis. Similar objects have been discovered in the Baltic Sea area and in Ladoga Karelia. Identical cape buckles have also been found in Gotland.

Location of the excavations (blocked in red). Courtesy Jouni Jäppinen

But based on the University of Helsinki analysis, the cremation grave finds date to a time that is significantly earlier -- during the Viking Age between 775-980 CE, based on their application of AMS (Accelerator Mass Spectrometry) techniques.

"The dating results show that the pyres burned about 895cal CE, not during the Crusader period," says Jouni Jäppinen, a key participant in the excavations. "So, now we are talking about a Viking Age harbor baseline in the Kymi River delta." Other results indicate that the harbor facilities were used from the Viking Age to the end of the Middle Ages, for as long as 500 - 600 years. Jäppinen and colleagues hypothesize that the harbor could have been a part of the Gotland or Danish operating range during the Viking Age, then after the year 1200 in use by Bishop Hemming of Turku, and beginning about 1350 as an Estonian monastery's salmon export center.

But perhaps the most eye-opening finds come from a number of sites located in the area between the towns of Loviisa and Pyhtää near the northeastern shores of the Gulf of Finland, not far from the Ahvenkoski harbor discoveries. There, they have located as many as twenty possible Roman Iron Age sites, with closer examination of ten. Of those more closely investigated, five revealed evidence of what the excavators interpret as early iron smelting furnaces and smithies. Two of the furnaces have been dated using AMS to between 204 BCE and 180 CE, within the Roman Iron Age period, but test results are still pending on analysis of iron slag deposits sampled from the sites.

"Some of the objects found also relate to the Migration Period and Viking Age activity in the Kymi River area," says Jäppinen, "such as a casted bronze ”triangle legs buckle”, which is the first artifact found from the Migration Period in southeastern Finland. Other artifacts are from the Roman Iron Age, and indicate a connection with Estonia and also Sweden. However, based on the asbestos ceramics found, there also appear to be connections to the inlands of Finland through the rivers." 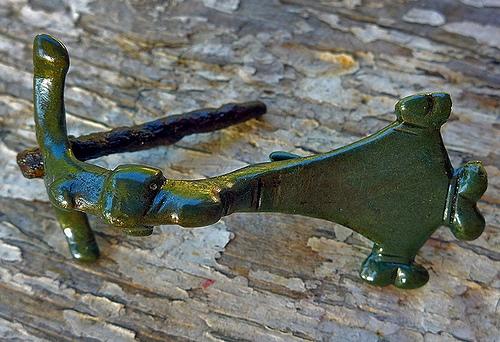 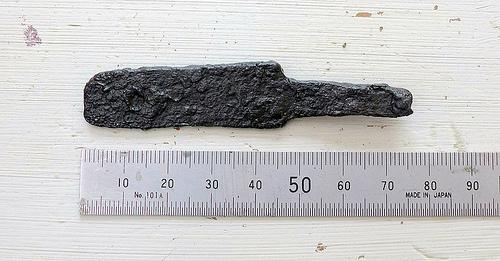 "These discoveries will change the prevailing view about Iron Age settlements on the eastern parts of the Gulf of Finland," says  Jäppinen. Until now, this part of Finland was thought to be devoid of human settlement during that time period.