Signs of the agricultural revolution in the Stone Age were found in northern Israel. Archaeologists discovered remains of an ancient village, along with sexual symbols. 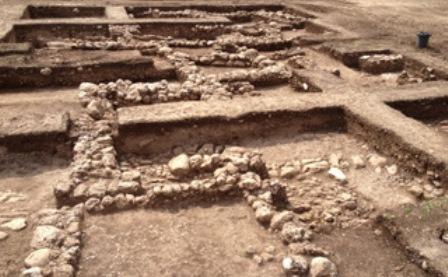 Plans to build a new railway line in the north have lead to the discovery of an ancient Stone Age settlement with evidence of flint and stone tools and cultic sexual symbols.

Prior to work on the rail line to Karmiel, east of Haifa, the Israel Antiquities Authority excavated the Ahihud Junction and unearthed remains and artifacts from the Pre-Pottery Neolithic period and the Early Chalcolithic period, dating from the seventh to the fifth millennium BCE.

“For the first time in the country, entire buildings and extensive habitation levels were exposed from these early periods, in which the rich material culture of the local residents was discovered,” said excavation directors Drs. Yitzhak Paz and Yaakov Vardi

They found remains of a village and “a large number of pottery vessels indicative of a highly developed pottery industry, flint tools, stone objects, as well as a number of unique artistic artifacts, among them a phallic figurine and a palette on which female genitals are schematically etched – these symbols also represented the fertility of the earth.”

“The ancient settlement remains ascribed to the Pre-Pottery Neolithic period were discovered on top of the bedrock in which the ancient inhabitants hew different installations, and even built plaster floors in several spots. We found a large number of flint and obsidian arrowheads, polished miniature stone axes, blades and other flint and stone tools,” the archaeologists added.

One of the materials for the tools is not found in Israel, indicating that trade flourished with other regions, including Turkey.

“Another unique find that can be attributed to this period is the thousands of charred broad bean seeds that were discovered together inside a pit. The Neolithic and Chalcolithic societies were agrarian societies that resided in villages, and it was during these periods that the agricultural revolution took place, when plants and animals were domesticated. This is one of the earliest examples of the proper cultivation of legumes in the Middle East,” they explained.

A preliminary analysis of the animal bones discovered at the site shows that pigs were a principal staple in the diet of the inhabitants.