In an ancient figurine, an ordinary and human scene

A tiny clay woman buried along the Mediterranean coast offers an intimate connection to people who lived 2,700 years ago 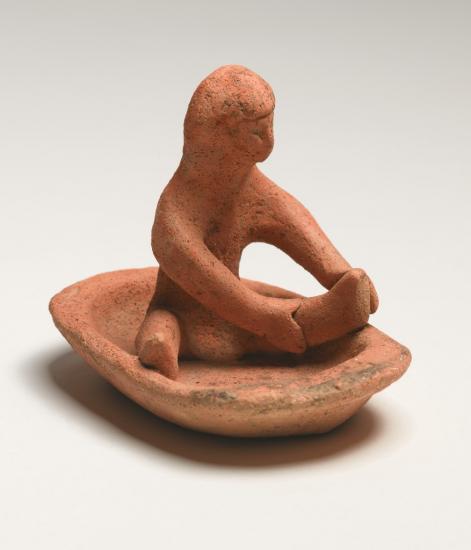 The figurine of the bathing woman was buried in a Phoenician grave in the 8th or 7th century BCE. (Photo credit: Courtesy of the Israel Museum)

This small clay figurine is one of the most evocative pieces in the Israel Museum’s vast archaeology collection precisely because it is not a portrayal of a famous monarch and has nothing to do with the Bible. As far as we know, it has no mystical significance at all.

The clay woman depicted here is touching because it is still so immediately clear what she is doing — she is in a bathtub, washing her left leg. Her gesture is easily recognizable 2,700 years after she was shaped, fired and buried in a grave along the Mediterranean coast.

The figurine was found in the early 1940s in a Phoenician cemetery at Achziv, near the Lebanon border, in an excavation by the archaeologist Immanuel Ben-Dor, who was working under the auspices of the British Mandate’s Department of Antiquities. That part of the coast was the heartland of the Phoenicians, seafaring traders who founded a string of city-states from modern-day Beirut south to Haifa and who are remembered for playing a key role in the spread of written language.

The woman, who appears to have been buried along with the body of someone who was neither poor nor royalty but rather a member of what we might anachronistically term the Phoenician middle class, is 3 inches (7.5 centimeters) high. Her right hand touches her thigh, and her left hand her toes. Her hair falls on either side of her head and across her forehead. Her face, according to the museum’s description, “is fairly crude, the expression placid.” The clay is local, coming from what today would be called Galilee or south Lebanon.

Scholars interested in day-to-day life in the ancient world have learned a great deal about attitudes to cleanliness and beauty. In some cultures, like Egypt, the wealthy would bathe daily, typically in the morning, according to the Israel Museum’s chief archaeology curator, Michal Dayagi-Mendels. The ancient Egyptian would stand on a stone slab next to a drain, and a maid or servant would pour water over them. In Mesopotamia, it seems, most people washed their entire body only before festivals.

In the land of Israel, bathing facilities appear to have been rare until the Hellenistic period, in the last centuries before the Common Era. Bathrooms were found, however, in two local palaces that housed Egyptian governors 3,000 years ago, one of which still had a jug that appeared to have been used for pouring water over a standing bather. In the story of David and Bathsheba, we learn that it might not have been uncommon to wash outdoors. And the book of Jeremiah teaches us that niter and vegetable alkali were used in bathing — both contain potassium, which helped to dissolve the grime.

At the ruins of Megiddo — the Armageddon of Christian tradition — archaeologists have found what appears to be a bathing facility from the same period as our figurine. There, too, the bather would have stood upright. But the clay woman shows that some people bathed sitting down, in tubs or basins. Poorer people in all cultures washed themselves in streams or rivers.

After bathing, people would oil their skin and apply ointments. These were often kept in alabaster pots, which helped keep the creams cool, or, in some cases, in striking containers made from ostrich eggs.

While the telling of ancient history tends to focus on the actions of kings, court intrigue, and battles, the bathing woman reminds us that people then were like people now.

“Many things may have changed, but in the pursuit of beauty archaeology shows us that much has remained the same,” Dayagi-Mendels said.