Who was King Senwosret III?

Much is known about King Senwosret from inscriptions on ancient stone stelae. According to monuments he had erected during his reign, he expanded Egypt’s territory further south, more than any previous ruler, said Adela Oppenheim, a curator in the Egyptian Art Department at the Metropolitan Museum of Art in New York. It set the pace for his followers. “He said that any son who does not keep this border is not his son,” added Oppenheim. He initiated military campaigns in Nubia, an ancient region that spans southern Egypt and northern Sudan. He also built temples, monuments and fortresses (most of which were flooded when the Egyptians built the Aswan Dam in the 1960s), added Wegner. It is believed that Senwosret III lived between 1878 BC and 1840 BC and that he was the son of Senwosret II, although this is not proven, according to Oppenheim. He had many wives, although it is not known how many.

Historians know what Senwosret III looked like because sculptures of him have survived, including two originals outside of Egypt at the Metropolitan museum in New York. Interestingly, he is the first ancient Egyptian pharaoh who was sculpted as an older man, without a smile on his face, said Oppenheim. “During this period, there was a radical change in how the king was depicted. He is depicted as if he has signs of aging. He is shown frowning. He has wrinkles on his forehead.” The reasons for this are not clear, but some historians say that perhaps this is because Egypt was enduring difficult times during Senwosret’s reign. However, Oppenheim believes that the sculptors were simply trying to show that the pharaoh had the wisdom that comes with age.

Other tombs to open to the public

In addition to King Senwosret’s tomb, which is the largest tomb in Abydos, visitors will also have access to three other ancient burial places. One is the smaller tomb of King Senebkay, where visitors will be able to see the  skeletal remains of the king who died around 1650 BC, about two centuries after King Senwosret. Unlike King Senwosret, about whom historians know much from ancient inscriptions, virtually the only information that we have about King Senebkay comes from his tomb. The king’s bones are marked with injuries that ended his life, Wegner said. Archaeologists discovered cut marks on the king’s feet and ankles (which suggest that he was attacked from below, perhaps while he was mounted on a horse), as well as injuries to his skull. (It is suggested that he was killed by axe blows to the head after he fell to the ground.)  “It is the earliest king whose physical remains indicate that he died in a battle,” Wegner said.* Unlike King Senwosret’s tomb which is not decorated, King Senebkay’s tomb is adorned with hieroglyphics, Wegner said.

Two tombs of brother kings King Neferhotep I and King Sobekhotep IV will also become accessible to the public, Wegner added. In ancient times, these two tombs probably had small pyramids, although these pyramids have not survived, Wegner said. He explained that the design of the tombs indicate that they were once capped by a superstructure.

In all, the Abydos necropolis contains the tombs of at least 12 kings, “a whole forgotten dynasty of kings,” with the tomb of King Senwosret III being the oldest and the largest, said Wegner. The tombs at Abydos are younger than the Great Pyramid of Giza, which dates to 2500 BC, yet older than the tombs in the Valley of the Kings, which span the period between 1500 and 1000 BC, Wegner said.  According to Wegner, ancient Egyptians stopped building pyramids and began to instead construct underground burial tombs due to a change in their religious beliefs and also in an attempt to keep out robbers.  “Many people think hiding the tomb underground without a pyramid on top of it helped to protect it,” he said. But Oppenheim suggests that ancient Egyptian consideration for building pyramids on top of tombs had more to do with the local landscape. They did not build pyramids in mountainous regions such as Abydos. “The mountains served as a marker that in some way was analogous to a pyramid,” she said.

General view of the tomb of the lost pharaoh Senebkay. Courtesy Josef Wegner and the Penn Museum

The skeleton of Senebkay. Courtesy Josef Wegner and the Penn Museum

While visitors will be able to descend into the tombs and see the ancient architecture, the smaller artifacts that archaeologists found at Abydos will not go on display there, Wegner said. Most of these items are currently in storage.

One of Wegner’s favorites is a birthing brick – the first such brick that had ever been found. He discovered it while excavating the house of the mayor in the ancient city (Wah-Sut) near the tombs. The brick depicts a woman holding a new-born child after giving birth. In ancient Egypt, women customarily stood on such bricks when they were in labor, he said. “We have ancient texts describing birth bricks, but no one had discovered one.” The brick dates from 1750 BC to 1800 BC. Although it was unearthed about 15 years ago, it has never been displayed to the public. Wegner said he is not particularly upset about that.  “You can open so many museums with the amount of stuff that has been excavated in Egypt, but a lot of stuff just doesn’t ever get displayed,” he said.  And although the brick is the first such item to have ever been discovered, Egyptian officials, says Wegner, were not particularly interested in it because it is not made from precious metals.

Painted reconstruction of the main scene on the birth brick. Courtesy Josef Wegner and the Penn Museum

Wegner and his crew from the University of Pennsylvania are returning to Abydos this summer to continue excavating.

Archaeologists work by first using magnetometers to create a magnetic map of the area – pieces of pottery and ceramics have good magnetic conduction properties and are an indication that there is something underground, Wegner said. The magnetometer can also detect mud brick structures because mud has iron in it, while the sand itself is mostly silica and has no magnetic properties, Wegner added. (The device works well only after people clear away modern garbage, such as metal cans and coins.) After that, archaeologists start digging – with the help of their Egyptian workers. Everything, even the tops of the tombs, is buried five to six meters under the desert sand, Wegner said. “It’s not a place where you brush off a little bit of sand.” Wegner wants to determine if Senwosret’s tomb extends beyond the 200 meters already excavated. If so, it might be the largest tomb of an Egyptian king ever discovered, he said.

He is also looking for a boat house. About two years ago, while excavating in Abydos, he found a building with images of hundreds of boats carved into the walls. He says the building may have served as a burial chamber for the funeral boats that carried the king’s body to the tomb, but nothing remains of the boats themselves because the wood was valuable, so it was probably stolen. 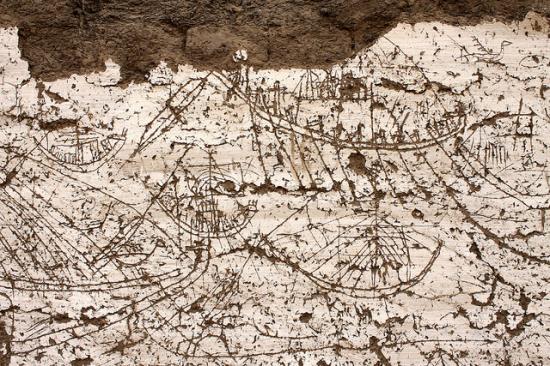 The boat images uncovered in an excavated building at Abydos. Courtesy Josef Wegner and the Penn Museum

What else is next at Abydos? Wegner suggests there is potentially more to discover at Abydos. “We know there are a bunch of other underground buildings in the area,” he said. Plenty of work for years to come.