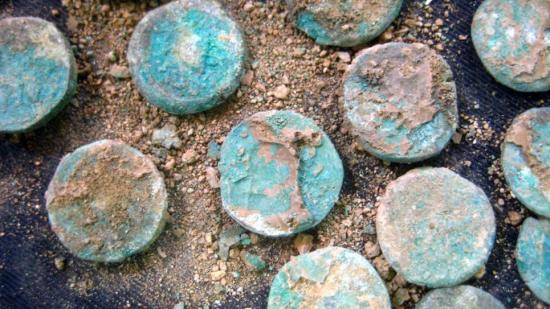 A hoard of coins from the fourth year of the Jewish Revolt against Rome — minted months before the fall of Jerusalem in 70 CE — was found outside the capital and announced by the Israel Antiquities Authority on Tuesday to coincide with the Ninth of Av, the date commemorating the destruction of the Second Temple.

The trove, which consists of 114 bronze coins, was unearthed during the expansion of Route 1, the major highway connecting Jerusalem and Tel Aviv, in February. In the past several months, the IAA team led by Judea District chief archaeologist Pablo Betzer has excavated the remains of a small Roman-era Jewish village near the modern town of Abu Ghosh. Amid the ruins was a broken juglet containing the verdigris-coated coins.

The coins are all of identical size and age, and possibly from the same mint. Their value has yet to be determined, but they are likely quarter or one-eighth shekel bits, Betzer said. They are all marked with the words “For the redemption of Zion” and “Year four,” indicating they were made during the fourth year of the revolt against the Roman Empire, or between spring 69 and spring 70 CE. They are decorated with the Biblical four species — palm, myrtle, citron and willow — and a vessel that may symbolize those used in the temple. The coins are still encrusted in nearly 2,000-year-old dirt and oxidation, and await cleaning and study by IAA specialists. 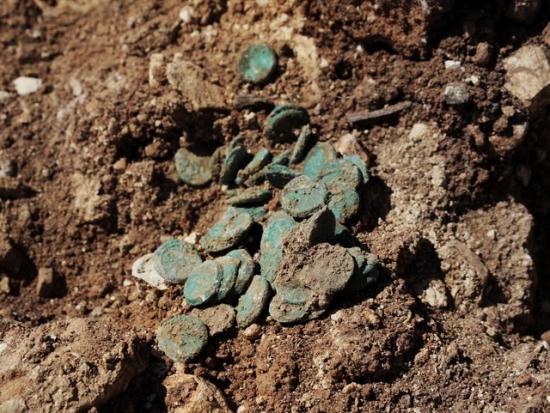 A trove of coins from the Jewish Revolt found outside Jerusalem by IAA archaeologists. (photo credit: Vladimir Neichin, IAA)

This is the first time such a large collection of Jewish rebel coins has been found, Betzer explained, noting that their identical dating is highly unusual.

“What this teaches this is that the person who held onto this trove received it all in one batch,” he said while exhibiting the brilliant greenish coins at the IAA’s Har Hotzvim laboratories in Jerusalem. “He received them from the rebel leadership; he may have been part of the rebel leadership.” Perhaps, he speculated, they were funds destined for the purchase of arms or provisions for the Jewish fighters against the Roman legions.

“These coins were minted a few months before the destruction of the temple [in Jerusalem],” he said. “It was one of the last efforts by the rebels to prevail.” Ultimately, however, they failed, and on the Ninth of Av, 70 CE, the Romans crushed the rebellion by destroying the temple in Jerusalem and slaughtering the city’s inhabitants. 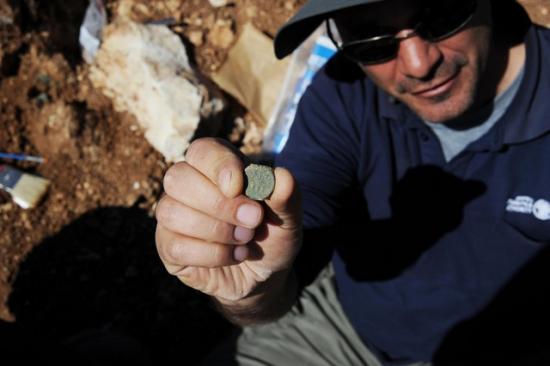 The site, a previously unknown village several kilometers outside the Jewish stronghold of Jerusalem along a main road to the coast, is known today as Hirbet Mazruk. Like many towns and villages that didn’t submit to Roman authority during and after the revolt, it was destroyed, and a level of destruction is visible at the site just above where the coins were found.

Betzer said the IAA will continue studying the site to learn more about Jewish agricultural villages during the period.

The announcement came shortly after the discovery of another ancient coin in the far northern site of Bethsaida, to the north of the Sea of Galilee. A team led by Professor Rami Arav of the University of Nebraska, Omaha, found a Roman coin this summer from the years immediately after the revolt bearing the phrase “Judea Capta,” commemorating the victory over the Jewish rebels and the destruction of the temple in Jerusalem.

The Judea Capta coin from Bethsaida was issued in 85 CE by Agrippa II, the great-grandson of Herod the Great, a supporter of the Romans in the war against the Jews, though a Jew himself. Minted at Caesarea Maritima, the Roman capital of the subjugated province of Judea, the bronze coin features the head of Roman Emperor Domitian on the obverse and a palm tree on the reverse.

Arav told The Times of Israel that the coin was found in the Roman-era town and that it’s one of only 10 of its kind from Israel, three of which were found at Bethsaida. He noted that the coins were a form of official state propaganda, and the palm tree was iconic of the land of Israel. What symbolism it was meant to convey is not clear.

“Agrippa II tried very hard to prevent the revolt but his young age and his total arrogance did not help,” Arav said. “You can only imagine history had he convinced the zealots not to revolt. The Temple would have been perhaps still be there, there would still be sacrifices in the Temple… and we would not have Tisha B’Av.” 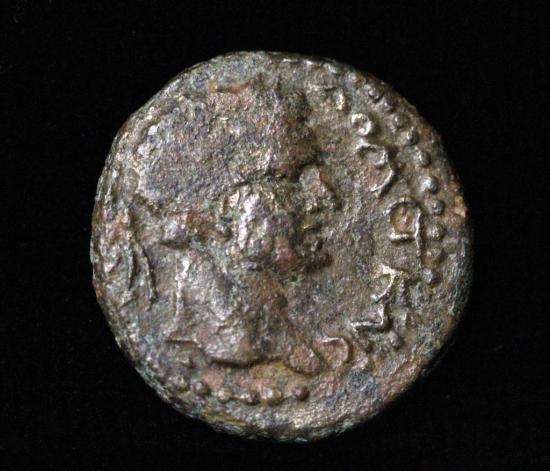