Archaeologists at the University of York have undertaken pioneering scans of the highest prehistoric paintings of animals in Europe.
Studying the rock paintings of Abri Faravel, a rock shelter in the Southern French Alps 2,133m above sea level, archaeologists used car batteries to power laser and white-light scanners in a logistically complex operation.

Producing virtual models of the archaeological landscape, researchers have now published the scans in Internet Archaeology - an online, open-access journal.

Abri Faravel was discovered fortuitously in 2010. The rock shelter has seen phases of human activity from the Mesolithic to the medieval period, with its prehistoric rock paintings known to be the highest painted representations of animals (quadrupeds) in Europe.

The study of Abri Faravel and its paintings is part of a wider collaborative project between the University of York and the Centre Camille Jullian, Aix-en-Provence, France. Undertaking research in the Parc National des E?crins, the long-running study investigates the development of human activity over the last 8,000 years at high altitude in the Southern Alps.

Research conducted so far includes the excavation of a series of stone animal enclosures and human dwellings considered some of the most complex high altitude Bronze Age structures. Artefacts found in Abri Faravel also include Mesolithic and Neolithic flint tools, Iron Age hand-thrown pottery, a Roman fibula and some medieval metalwork.

The paintings at the Abri Faravel. Two groups of roughly parallel lines, and two animals facing one another. (a) Normal light image; (b) Zoom of paintings – colours enhanced with DStretch with the YBR matrix Credit: C. Defrasne
However, the paintings are the most unique feature of the site, revealing a story of human occupation and activity in one of the world's most challenging environments from the Mesolithic to Post-Medieval period.

Dr Kevin Walsh, Senior Lecturer in York's Department of Archaeology and project lead, said: "After years of research in this valley, the day we discovered these paintings was undeniably the highlight of the research programme.

"Whilst we thought that we might discover engravings, such as in the Vallée des Merveilles to the south-east, we never expected to find prehistoric paintings in this exposed area that affords so few natural shelters.

"As this site is so unusual, we made the decision to carry out a laser-scan of the rock shelter and the surrounding landscape, plus a white-light scan of the actual paintings. The scanning was logistically complex as our only source of electricity was car batteries, which, along with all of the scanning equipment, had to be carried up to the site.

"This is the only example of virtual models, including a scan of the art, done at high altitude in the Alps and probably the highest virtual model of an archaeological landscape in Europe." 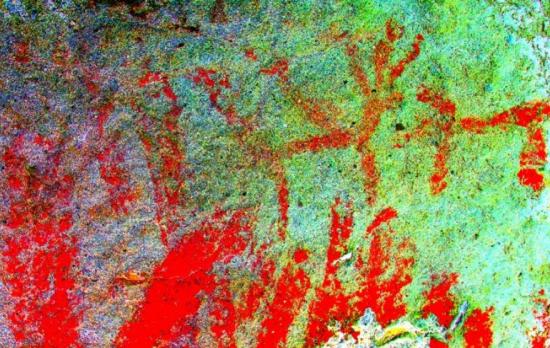 A crop of an image of the paintings with the colors enhanced with DStretch with the YBR matrix. (Loic Damelet, CCJ-CNRS)