Archaeologists in Egypt have uncovered the remains of a temple devoted to Nineteenth Dynasty Pharaoh Ramses II, casting further light on the religious practices associated with the ruler who was revered in his own lifetime as a god.

The parts of the temple were uncovered by a joint Czech and Egyptian archaeological mission working at the Abusir Necropolis in Giza in the north of the country. The team also uncovered motifs devoted to the ancient Egyptian sun gods among the ruins of the structure, believed to be over 3,200-years-old.

Mohamed Megahed, deputy director of the mission, said in a statement that his team had found the temple in an area created by a natural transition between the banks of the Nile and the floodplain at Abusir.

The temple measures roughly 100 feet in width and 170 feet in length a comprised a large forecourt flanked by two identical storage buildings. 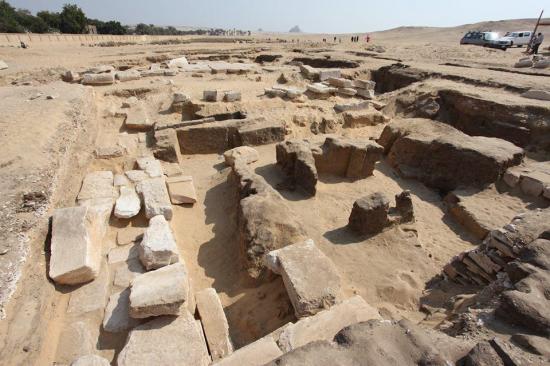 The temple measures roughly 100 feet in width and 170 feet in length a comprised a large forecourt flanked by two identical storage buildings. EGYPTIAN MINISTRY OF ANTIQUITIES

Megahed said studies of the ruins had indicated that stone columns had lined the walls of the forecourt which had in turn been enclosed by mudbrick walls. In some places they appear to have been painted blue.

At the back of the court, the archaeologists uncovered what appeared to be a ramp or staircase leading to a raised stone chamber. The back end of the chamber was subdivided into three parallel rooms.

“The remains of this building, which constitutes the very core of the complex, were covered with huge deposits of sand and chips of stone of which many bore fragments of polychrome reliefs,” Professor Mirsolave Barta, director of the Czech mission, told Egyptian state media.

Barta and his team were able to date the complex to between 1213-1279 B.C. using fragments used in the decorative scheme of the country. A relief one wall was inscribed with the different titles of King Ramses II, as well as cultic, devotional writings to the solar deities Re, Amun and Nekhbet.

“The discovery of the Ramses II temple provides unique evidence on building and religious activities of the king in Memphis area and at the same time shows the permanent status of the cult of sun god Re who was venerated in Abusir since the Fifth Dynasty and onwards to the New Kingdom,” Barta explained.

Egypt’s Ministry of Antiquities has sought in recent years to emphasize the extent of archaeological work still ongoing in the country. The ancient ruins in Egypt, particular to Pharaonic culture, had been a huge draw to international tourism. However in years of civil strife following the country’s 2011 revolution and a string of terror attacks particularly in the country’s restive Sinai peninsula, tourist numbers have dwindled.