New details have emerged of a previously unknown queen of ancient Egypt -- and if the professor behind the find is correct, it could be bad news for the rest of us.

Reports surfaced in November of the tomb of Khentkaus III, a queen in the era of the Old Kingdom (2649--2150 BC). Discovered in a necropolis in Abusir, southwest of Cairo, she lay 650 feet away from her husband, Pharaoh Neferefre (also known as Reneferef), who ruled some 4,500 years ago.

The find helps color what project leader Professor Miroslav Barta calls "a black patch in the history of the Old Kingdom." Despite holding the epithet "Queen Mother" -- known thanks to graffiti scrawled on the wall of her final resting place -- Neferefre's principal wife was hitherto unknown.

As the team from the Czech Institute of Egyptology begin the long process of analyzing the contents of the tomb, Barta believes it may offer insights into a time not dissimilar from our own -- and from which disaster struck and ruin ensued.

Inside the mummy's tomb 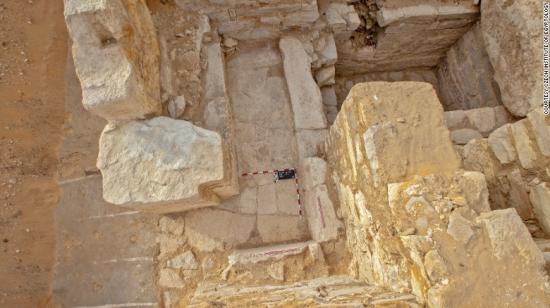 A view from above looking down into the tomb of Khentkaus III.

Alongside human remains, archaeologists discovered pottery, woodwork, copper and animal bones -- "her funerary repast," explains Barta. These items, including the anthropological evidence in the human bones, could offer clues about her life.

"The scientific potential is rather huge," suggests Barta when describing the contents of the tomb.

Carbon dating can help predict the age of the queen, if she suffered from any physical ailments and, depending on the condition of the pelvis, how many children she bore. A three-dimensional facial reconstruction will be "extremely difficult, if not impossible," however, due to the body's smashed skull, likely a result of tomb raiders.

Barta estimates it will take two years to make a full analysis of the tomb's contents, but he's optimistic it will provide a wealth of new information for Egyptologists.

Already, though, he notes some similarities between the world Khentkaus occupied and our own.

Professor Barta says that from the find, pottery is among the most important due to its "chronological sensitivity."

"(It was) a crucial period when the Old Kingdom started to face major critical factors: The rise of democracy, the horrific impact of nepotism and the role played by interest groups," he says, adding that climate change also played a role in bringing an end to not only the Old Kingdom empire, but those in the Middle East and Western Europe at that time.

Within 200 years of the Queen Mother's death, the Nile no longer flooded and drought consumed the kingdom.

"(This) contributed to the disintegration of the era of the pyramid builders," Barta explains. "Without reasonable floods, there were no reasonable harvests and therefore very bad taxes; without appropriate taxes there were no sufficient means to finance the state apparatus and maintain the ideology and integrity of the state."

The find is both a historical echo and a warning, suggests the project leader.

"You can find many paths to our modern world, which is also facing many internal and external challenges," he argues. "By studying the past you can learn much more about the present. We're not different [from them]. People always think 'this time it's different,' and that 'we're different'. We are not."

So are we too on the brink of disaster? It's possible, says Barta. But with the findings, and hopefully the lessons we can learn from Khentkaus' tomb, he hopes we can take another path.

"If we accept collapse as a fact, we will understand collapses as being a part of the natural course of things, and one of the needed steps in the process leading towards 'resurrection,'" he argues.

"Then, we shall be able to do something about it."