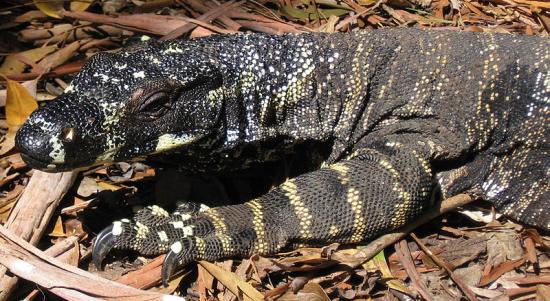 A team of American researchers led by anthropologist Rebecca Bliege Bird of Stanford University has found that a bush burning hunting technique used by aboriginal hunters in western parts of Australia leads to an increase in the number of sand goannas—their main prey. In their paper published in Proceedings of the Royal Society B: Biological Sciences, the team describes a decade long study of the Martu Aboriginal people, their hunting techniques and the impact the people have on their environment.

The common assumption in field studies is that when humans hunt, the number of prey falls—it just seems to be common sense. In this new effort, Bliege Bird and her colleagues have found that may not always be the case. In studying how the Martu people hunt, the researchers learned they use controlled small fires to burn away brush that allows them to find the dens of sand goannas—a type of monitor lizard. Their controlled small burns are in stark contrast to the wildfires that race across the bush due to lightening strikes in areas where the Martu don't live and hunt. Once the dens have been located, the hunters (all women) use sticks to prod the lizards into revealing themselves. Once killed, the lizards are cooked and eaten—they make up a substantial portion of the Martu diet.

Aboriginal people have been living in the Australian Outback for thousands of years, and until recently, were allowed to continue their hunting practices without interference by modern people that have migrated to the country. Believing that the people living in the outback were depleting the numbers of animals that lived in the bush, the government began attempting to move them towards a more modern way of living. Unfortunately, that move appears to have backfired as the numbers of indigenous animals has been declining with several groups going extinct altogether. This new research suggests that because the Aboriginal people have been living in the environment for such a long time, they have become an integral part of its existence.

Over the years, the research team has conducted extensive surveys of sand goannas both near where the Martu live, and in distant places. In so doing, they have found that there are on average twice as many of the lizards in the areas where the Martu hunt, than in those areas where they don't. They attribute this to the localized burning that is used to hunt them. They believe it leads to a more varied environment that allows for more diversity, which in turn means more food for to the lizards, causing growth in population.

Abstract
Anthropogenic fire is a form of ecosystem engineering that creates greater landscape patchiness at small spatial scales: such rescaling of patch diversity through mosaic burning has been argued to be a form of niche construction, the loss of which may have precipitated the decline and extinction of many endemic species in the Western Desert of Australia. We find evidence to support this hypothesis relative to one keystone species, the sand monitor lizard (Varanus gouldii). Paradoxically, V. gouldii populations are higher where Aboriginal hunting is most intense. This effect is driven by an increase in V. gouldii densities near successional edges, which is higher in landscapes that experience extensive human burning. Over time, the positive effects of patch mosaic burning while hunting overwhelm the negative effects of predation in recently burned areas to produce overall positive impacts on lizard populations. These results offer critical insights into the maintenance of animal communities in the desert, supporting the hypothesis that the current high rate of endemic species decline among small animals may be linked to the interaction between invasive species and mid-century removal of Aboriginal niche construction through hunting and patch mosaic burning.