Ability to 'think about thinking' not limited to humans 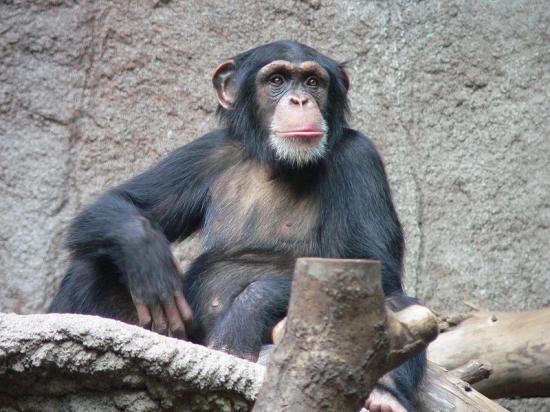 Humans' closest animal relatives, chimpanzees, have the ability to "think about thinking" – what is called "metacognition," according to new research by scientists at Georgia State University and the University at Buffalo.

"The demonstration of metacognition in nonhuman primates has important implications regarding the emergence of self-reflective mind during humans' cognitive evolution," the research team noted.

Metacognition is the ability to recognize one's own cognitive states. For example, a game show contestant must make the decision to "phone a friend" or risk it all, dependent on how confident he or she is in knowing the answer.

"There has been an intense debate in the scientific literature in recent years over whether metacognition is unique to humans," Beran said.

Chimpanzees at Georgia State's LRC have been trained to use a language-like system of symbols to name things, giving researchers a unique way to query animals about their states of knowing or not knowing.

In the experiment, researchers tested the chimpanzees on a task that required them to use symbols to name what food was hidden in a location. If a piece of banana was hidden, the chimpanzees would report that fact and gain the food by touching the symbol for banana on their symbol keyboards.

But then, the researchers provided chimpanzees either with complete or incomplete information about the identity of the food rewards.

In those cases, they should have first gone to look in the hidden location before trying to name any food.

In the end, chimpanzees named items immediately and directly when they knew what was there, but they sought out more information before naming when they did not already know.

The research team said, "This pattern of behavior reflects a controlled information-seeking capacity that serves to support intelligent responding, and it strongly suggests that our closest living relative has metacognitive abilities closely related to those of humans."