A cooking pot found at Abermagwr has been partially reconstructed

Artefacts discovered at a Roman villa near Aberystwyth are making archaeologists rethink the way the Romans lived in the area.

The remains of the 4th Century building were discovered at Abermagwr in 2006 and confirmed by excavations in July 2010.

And now some of the most important finds at the dig will go on display at Aberystwyth's Ceredigion Museum.

They include pieces of a Roman cooking pot and Roman coins. 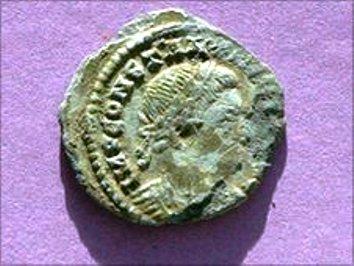 Also exhibited will be fragments of an olive oil container from southern Spain and Roman roof tiles.

Findings indicate Abermagwr had all the trappings of villas found further south, including a slate roof and glazed windows.

It is the most north-westerly villa found in Wales and has forced experts to reconsider the whole nature of Roman settlement across mid and north Wales.

The villa is likely to have belonged to a wealthy landowner, with pottery and coin finds on the site indicating occupation in the late 3rd and early 4th Centuries AD. 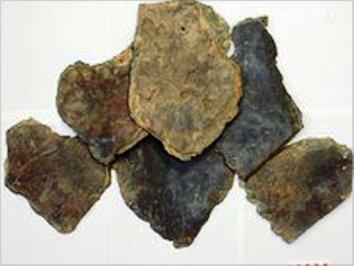 The 2010 excavations were carried out by Dr Toby Driver of the Royal Commission on the Ancient and Historical Monuments of Wales and Dr Jeffrey Davies, formerly of the Department of History and Welsh History at Aberystwyth University.

Dr Driver said that three coins had been unearthed from the villa's clay floor and had been sealed under collapsed debris.

"This provides evidence that the villa was occupied into the third decade of the fourth century AD," said Dr Driver.

Part of a cooking pot was discovered broken into a hearth and has been partially reconstructed.

"This pot was made from Dorset clay and we know from its design and shape that this type of pot was made in enormous quantities," he said.

"But the villa is a long way from any market centre, the nearest being Carmarthen, so it might well have been sold to the villa's owner by an itinerant trader."

Another find on display will be fragments of an amphora, or ceramic vase that would have contained olive oil.

Dr Driver said: "This artefact was made in southern Spain, which again, shows the international connections of whoever lived at Abermagwr.

"The only thing we don't know is how or why this wealthy farming estate came to an end."

Dr Driver will return with his team to Abermagwr to make further excavations in summer 2011.

"We will also make a geophysical survey of another possible villa site near Builth Wells next spring," he said.

"By putting the finds on display this Christmas, we hope we can explain why Abermagwr is now so important to the history of Roman Wales."

The exhibition of the Roman finds will be launched in the Bowen archaeology gallery, Ceredigion Museum, at 1200 GMT on Saturday 11 December.