Aberdeen (G-B): Who were the 30 skeletons discovered? 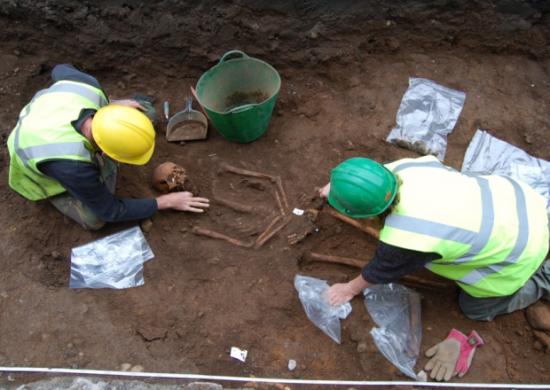 Archaeologists with one of the skeletons found in Aberdeen city centre
Work is now underway to establish who exactly were those found just off Schoolhill, the busy stretch of city where shoppers, students and streams of workers had obliviously tread over the bodies which had lain still for so long.

The skeletons were found in July after workmen moved in tolay a new utilities cable for Robert Gordon’s College.

Reconstruction of medieval burial in Aberdeen

Archaeologist Ali Cameron had been called in to monitor the work, given the rich history of this area of the city centre, where a hospital had been built for the Duke of Cumberland’s troops in 1746.

It is likely that the most recent find was linked to Blackfriars, a church and friary destroyed during the Reformation.

While Ms Cameron had worked on several medieaval sites in Aberdeen,she admits she was still taken aback by the scale of the discovery.

She said: “We had never found any articulated skeletons before. Quite a lot of building work has been carried out in the area, just metres away, and they missed very closely to destroying these remains.” 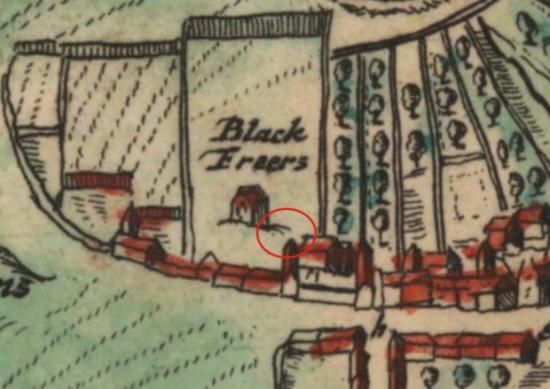 Parsdon Gordon map of 1651 which shows friary. Red circle shows where skeletons were found. Credit National Library of Scotland
During the excavation, evidence of a north to south wall was found, possibly the east wall of the friary church.

And given that the heads of the skeletons were pointed towards the east wall - closest to the high altar - it suggests those buried were from wealthier sections of Aberdeen society.

Ms Cameron said: “On the day of judgement, people wanted to be as close as possible to the high altar. People would pay more to be buried there.

“It would have been the wealthier people of Aberdeen who could afford to be buried there.”

While they may have had a little more money than the average medieval Aberdonian, initial findings also suggest those buried had far from comfortable lives.

“We talk about these people being wealthy but they were not healthy. However, it does appear some did live longer than the average.

“They would have done fairly hard work but would have been comparatively wealthy. Wealthy enough, in any case, to afford a small amount of money to Blackfriars for a burial.

Remnants of coffins were also found at the site, which also indicates those buried had spare money to spend, Ms Cameron said.

Twenty five of the skeletons have now been sent by boat to human bone specialist Paul Duffy, who lives on the Isle of Bute.

Working with basic tools such as calipers and a magnifying glass, Mr Duffy will be working to establish the age of the individual at time of death, the sex, height and evidence of any diseases.

He said that every skeleton was treated as an individual person.

Mr Duffy said: “You are always dealing with an individual. We lay each of the skeletons out in an anatomical position.

“In doing that, every one of them has their own personality through the bones. You can start to see if someone is tall or short and understand the different facial features, such as a prominent chin.

“Right the way through the analysis, it is always important to remember these are not bones, it is actually the remains on an individual person.”

Tiny fragments of bone then to be sent to sent for carbon dating testing at the Scottish Research Reactor Centre at East Kilbride.

This should allow for the age of the skeletons to be determined within a 50-year window.

It is expected that the bodies, which were found over three layers, will date from various periods between the mid 1200s and the mid 1500s, when the friary was destroyed.

Further work will also be carried out by Dr Kate Britton of Aberdeen University.

It could be established if those buried eat a diet rich in fish, meat or sugar, if they worked kneeling or bending over and if they worked using their mouth as ‘third hand’ to hold materials such as leather of fishing nets.

Mr Duffy said the research would feel into earlier findings made on other Aberdeen excavations at Lightfriars and St Nicholas Kirk to build up a clearer understanding of life in medieval Aberdeen.