Abydos (Egypte) : the "Terrace of the Great God."

A mystery building with animal mummies

In the same season the team investigated a "monumental" building with three chambers at the back, on the western side, and a transverse corridor in front on the eastern side.

Researchers think that this may be a temple.

While the thickness of the walls — 6 feet (2 meters) thick — suggests the building could have been used as a storage area, its design indicates a religious purpose. "It looks much more like a temple plan," Pouls Wegner said.

Scant inscriptions found at the site refer to Seti I, a pharaoh of Egypt who ruled more than 3,200 years ago, suggesting it was built for the pharaoh. The temple's bricks are also identical to those found in a nearby temple known to have been started by Seti.

Packed tightly into one of the chambers, the team discovered a cache of at least 83 animal mummies, which dates back more than 2,000 years. Most of the animals are dogs, although they also found two cats as well as sheep and goats. 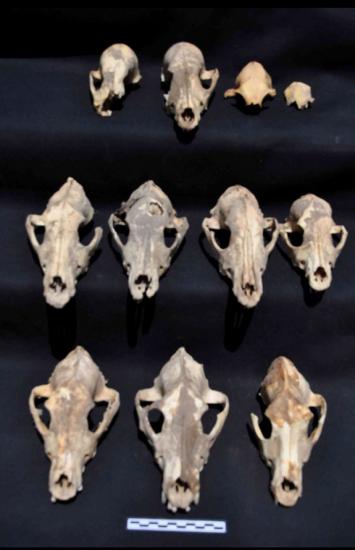 In one chamber of the tomb the team found a cache of animal mummies, at least 83 of them, all of them sacrificed. Most of them are dogs whose mummy wrappings have fallen off. Researchers think that the mummies are from a large, undiscovered, tomb and were tossed into the monumental building when it was robbed. This image shows some of the dog skulls. They would also date back more than 2,000 years.

The team believes that the animals were each sacrificed and are from an as-yet-undiscovered tomb in the area that likely dates to a later period than the monumental building.

"I think there's another tomb there, another third intermediate period (3,000 to 2,600 years ago), tomb, a very large one," said Pouls Wegner. This tomb would likely have been re-used at a later date.

"In some subsequent period, when that tomb was robbed, disturbed, the animals were simply, you know, taken out with a pitchfork and became disarticulated and dissociated from their original linen wrapping," Pouls Wegner told the Toronto audience.

The presence of so many dogs is likely related to Wepwawet, a jackal god whose procession immediately precedes Osiris' at Abydos. He "overthrows and subdues all potential enemies," writes David O'Connor, a professor at New York University, in his book "Abydos: Egypt's First Pharaohs and the Cult of Osiris" (Thames and Hudson, 2009).

Pouls Wegner explained that people visiting the temple were probably able to get a sacrificed dog to offer the god. "I think this is just another form of votive activity really, in addition to putting out a spoken prayer or commemorating prayer on a stele, that one could sacrifice an animal that was associated with him in some way."

Nursing a dog back to health

One of the dogs appears to have suffered a fracture on its long bone that had subsequently healed up, suggesting someone nursed the dog back to health before sacrificing it.

The researchers aren't sure why the Egyptians would bother doing this instead of killing the canine right away. It could be that the temple didn't have a buyer or perhaps the dog belonged to someone and was rounded up by temple workers.

"It could be that the dog had some sort of owner who took care of him at one point in his life," Pouls Wegner said.

In a chamber next to the animal mummies, the team uncovered a wooden statue encrusted with mud and termite droppings. An Egyptian wood conservation expert restored the statue to reveal a 25-inch (65 cm)-tall figure wearing a Nemes headdress, the mark of a pharaoh. "There are very few royal wooden statues left," Pouls Wegner said.

The statue's proportions matched up with those of statues dating from the 18th dynasty of Egypt's history, from about 3,550 to 3,300 years ago. That is, with one big exception — the waist is significantly thinner. 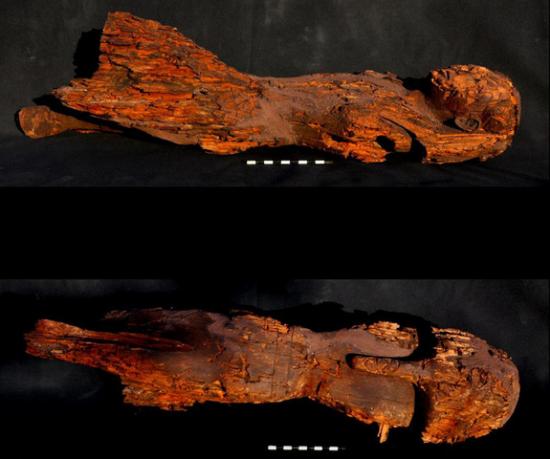 Another image of the royal wooden statue. When it was first found it was encrusted with mud and termite droppings. An Egyptian wood conservation expert was brought in to work on it.

This brought up an intriguing question — could this statue be a representation of Hatshepsut, a female pharaoh who ruled Egypt about 3,500 years ago? No wooden statues of her are known to exist, so Pouls Wegner examined large stone statues of her.

"Even though she was portrayed as a man in her [statues], oftentimes they did give a nod to her female physique by making her waist narrower," she said. In addition the contours of her cheeks and chin are sometimes depicted as being a little more delicate. Could it be her? "I think it's possible," Pouls Wegner said.

The researchers think the statue was likely carried in the Osiris procession, although they can’t rule out that it was from a tomb or temple.

A pair of tombs

Nobles abound at the terrace site, as the team also found two tombs, one of which is located beside a chapel constructed by Thutmose III, a pharaoh who ruled Egypt about 3,400 years ago. The team left the vaulted tomb unexcavated for now. 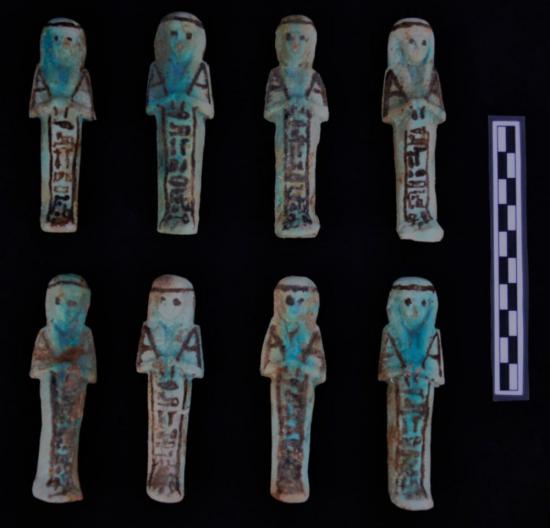 Found in the tomb, the faience shabtis would have done the work of the deceased in the afterlife.

The second tomb, dating to the same time period, was found in the monumental building. Human remains, linen and wood fragments were found nearby. Inside this tomb, the team found faience shabti figurines. In ancient Egypt, these figures were buried with the individual so that they could do their work for them in the afterlife. Archaeologists found that the person originally buried there, a priest whose full name included the name of the goddess Isis, had 58 worker shabtis still in the tomb, along with six overseer figures meant to supervise them.

Another group of shabtis, these made of clay, found in the tomb date back around 2,600 years ago. These figures held clear fingerprints of children, suggesting children in Egypt crafted together shabtis to do the work of the deceased in the afterlife. "One could do fingerprint analysis with them, they’re very crisp and very clear," Pouls Wegner said. 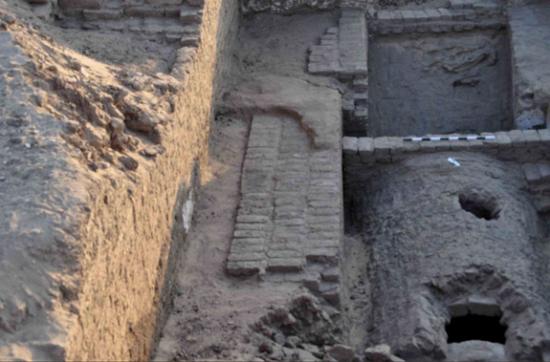 Inside the monumental structure the team found a vaulted tomb that dates back around 3,000 years. It would have originally belonged to a priest whose name was combined with the goddess Isis. It had been robbed in antiquity with robbers entering through a hole.

The team will continue their exploration of the site, which is a difficult area for researchers to examine to say the least. "For the archaeologist this zone is a dismaying wasteland, which seems to offer almost overwhelming challenges to interpretation and excavation," writes O'Connor, adding that 19th-century antiquity seekers had dug up the site, leaving some of the earliest archaeological remains on top of the more recent material.