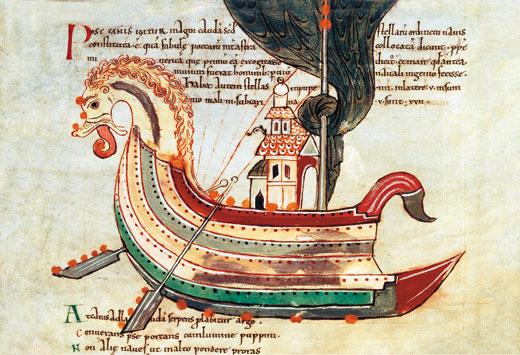 The mounting evidence increasingly pointed to an astonishing conclusion: this was a mass grave of Viking warriors.

In the late eighth century a.d., the Vikings—a Scandinavian people from Denmark, Norway and Sweden—began a 300-year campaign of pillaging and piracy throughout Europe. Some scholars say that political changes (especially the emergence of fewer yet more powerful rulers) forced local Viking chieftains to seek new sources of revenue through foreign conquests. Others point to advances in shipbuilding that enabled longer voyages—allowing the Vikings to establish trade networks extending as far as the Mediterranean. But when an economic recession hit Europe in the ninth century, Scandinavian seamen increasingly turned from trading to pillaging.

Most historians believe that England suffered more from the Vikings than other European countries. In the first recorded attack, in A.D. 793, Vikings raided an undefended monastic community at Lindisfarne in the northeast. Alcuin of York, an Anglo-Saxon scholar, recorded the onslaught: “We and our fathers have now lived in this fair land for nearly three hundred and fifty years, and never before has such a terror been seen in Britain as we have now suffered at the hands of a pagan people. Such a voyage was not thought possible. The church of St. Cuthbert is spattered with the blood of the priests of God.”

The Anglo-Saxon Chronicle, a contemporary historical account, records that the Vikings waged some 50 battles and destroyed or ravaged scores of settlements. Dublin, one of the largest Viking cities in the British Isles, became a major European slave-trading center, where, historians estimate, tens of thousands of kidnapped Irishmen, Scotsmen, Anglo-Saxons and others were bought and sold.

“In many respects the Vikings were the medieval equivalent of organized crime,” says Simon Keynes, a professor of Anglo-Saxon history at Cambridge University. “They engaged in extortion on a massive scale, using the threat of violence to extract vast quantities of silver from England and some other vulnerable western European states.”

“Certainly the Vikings did all these things, but so did everyone else,” says Dagfinn Skre, a professor of archaeology at the University of Oslo. “Although admittedly, the Vikings did it on a grander scale.”

Martin Carver, an emeritus professor of archaeology at the University of York, characterizes the antagonism between the Anglo-Saxons and the Scandinavians as part of a wider clash of ideologies. Between the sixth and ninth centuries, Vikings in Scandinavia preferred to be organized “in loose confederations, favoring enterprise,” says Carver. But other parts of Europe, such as Britain, yearned for a more orderly, centralized government—and looked to the Roman Empire as a model.

Only one Anglo-Saxon kingdom—Wessex, ruled by Alfred the Great—is known to have withstood the Viking invasion. Alfred and his son, Edward, built up an army and navy and constructed a network of fortifications; then Edward and his successors wrested back control of those areas the Vikings had taken over, thus paving the way for English unification.