A story of 69 ancient Europeans 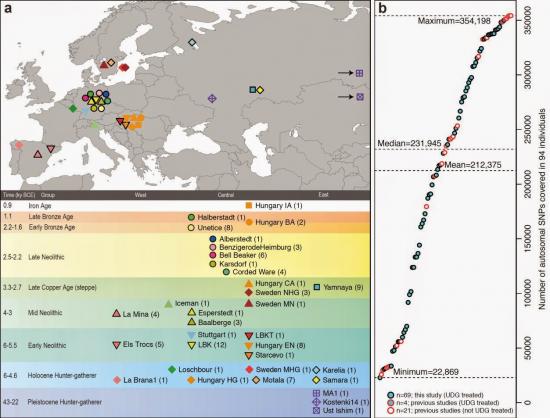 A new study on the bioRxiv includes data on 69 ancient Europeans (remember when we got excited in anticipation for the single genome of the Iceman? that was only three years ago) and adds plenty of new info to chew on for those of us interested in prehistory.

Two Near Eastern migrations into Europe

In 2011, I observed that West Eurasian populations were too close (measured by Fst) to allow for long periods of differentiation between them. By implication, there must have been a "common source" of ancestry uniting them, which I placed in a "womb of nations" of the Neolithic Near East. I proposed that migrations out of this core area homogenized West Eurasians, writing:

In Arabia, the migrants would have met aboriginal Arabians, similar to their next door-neighbors in East Africa, undergoing a subtle African shift (Southwest_Asians). In North Africa, they would have encountered denser populations during the favorable conditions of MIS 1, and by absorbing them they would became the Berbers (Northwest_Africans). Their migrations to the southeast brought them into the realm of Indian-leaning people, in the rich agricultural fields of the Mehrgarh and the now deserted oases of Bactria and Margiana. Across the Mediterranean and along the Atlantic facade of Europe, they would have encountered the Mesolithic populations of Europe, and through their blending became the early Neolithic inhabitants of the Mediterranean and Atlantic coasts of Europe (Mediterraneans). And, to the north, from either the Balkans, the Caucasus, or the trans-Caspian region, they would have met the last remaining Proto-Europeoid hunters of the continental zone, becoming the Northern Europeoids who once stretched all the way to the interior of Asia.

The new paper confirms the last two of these migrations. The remainder involve parts of the world from which no ancient DNA has been studied.

The first migration (early Neolithic) is already uncontroversial, but the paper includes data from Spanish early farmers that are also Sardinian- and LBK-like. The "Sardinian" Iceman was no fluke. It is now proven that not only the LBK but also the Spanish Neolithic came from the same expansion of Mediterranean populations which survives in Sardinia. The authors write:

Principal components analysis (PCA) of all ancient individuals along with 777 present-day West Eurasians4 (Fig. 2a, SI5) replicates the positioning of present-day Europeans between the Near East and European hunter-gatherers4,20, and the clustering of early farmers from across Europe with present day Sardinians3,4,27, suggesting that farming expansions across the Mediterranean to Spain and via the Danubian route to Hungary and Germany descended from a common stock.

The Yamnaya differ from the EHG by sharing fewer alleles with MA1 (|Z|=6.7) suggesting a dilution of ANE ancestry between 5,000-3,000 BCE on the European steppe. This was likely due to admixture of EHG with a population related to present-day Near Easterners, as the most negative f3-statistic in the Yamnaya (giving unambiguous evidence of admixture) is observed when we model them as a mixture of EHG and present-day Near Eastern populations like Armenians (Z = -6.3; SI7). 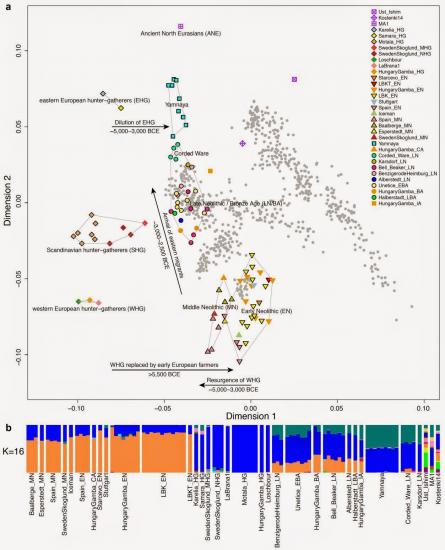 The EHG (Eastern European Hunter-Gatherers) are likely Proto-Europeoid foragers and the Yamnaya (a Bronze Age Kurgan culture) were a mixture of the EHG and something akin to Armenians.The "attraction" of later groups to the Near East is clear in the PCA: hunter-gatherers on the left side, the Near East (as grey dots) on the right side, and Neolithic/Bronze Age/modern Europeans in the middle. The second migration may very well be related to the Uruk expansion and the presence of gracile Mediterranoids and robust Proto-Europeoids in the Yamna:

The Yamna population generally belongs to the European race. It was tall (175.5cm), dolichocephalic, with broad faces of medium height. Among them there were, however, more robust elements with high and wide faces of the proto-Europoid type, and also more gracile individuals with narrow and high faces, probably reflecting contacts with the East Mediterranean type (Kurts 1984: 90).

The authors present a table of Fst values which confirms the homogenizing influence of migrations from the Near East. The WHG group has an Fst=0.086 with Armenians, but the LBK farmers have only 0.023. The EHG group has an Fst=0.067 with Armenians, but the Yamnaya steppe people have only 0.030. Someone might argue that it is the Armenians that are receiving genes from Europe, but the same pattern holds even for the Bedouins, for which admixture with Europeans seems far-fetched: 0.106 to 0.043 and 0.093 to 0.060. It is now clear that the "glue" that did not allow West Eurasian populations to drift very far apart were migrations from the Near East.