A Paleo-Forensic Study of an Assyrian Captive

One of the great strengths of archaeology is that it can act as independent evidence to history. History is often based on the text and interpretations of the victors. This has led to numerous biases and problems. History can be skewed to favor a specific perspective or to support a cause, and often it is revamped for propaganda. Think about the recent re-interpretations of what Thanksgiving actually means and the way that the ‘New World’ was discovered. Archaeology can be used to challenge history since it is the study of the actual remains of behavior rather than interpretations or personal perspectives of behavior. One such historical assumption that has been made in texts is the cruelty of the Assyrians against their enemies in first millennia BCE. 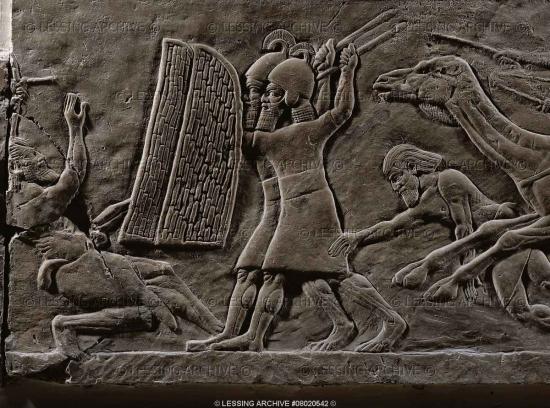 Cohen et al. (2012) examine the claims from historical texts that the Assyrians were cruel and violent in the first millennia BCE. Other kingdoms from this era portray them as warlike and vicious in battle, and their own inscriptions and texts provide vivid imagery of brutality towards other. However, archaeological evidence of this is scarce. Several sites do show potential signs of brutality such as knife marks in eye sockets of one individual, a mass burial at a city gate, and a group burial containing individuals who had been decapitated and mutilated. The problem is that they are either individual cases, natural catastrophe or not easily attributed to the Assyrians. Therefore, it had been concluded that the imagery and textual descriptions of cruelty were merely very good propaganda. Assyrian kings relied on war prowess for power, it is possible that their brutality was emphasized by royal artists and record keepers.

Cohen et al. (2012) examine a single skeleton known to have been killed by Assyrians in order to determine the extent of their cruelty. They propose that by using modern forensic techniques they will be able to better understand the extent and cause of the injuries, matching them to imagery from Assyrian art. The remains come from a burial cave east of Khirbet Shemsin in Israel. Within the chambers they found a total of ten individuals, including 7 children and 3 adults. Based on artifacts the cave dates to the 8th c. BCE, a period when the Assyrians were actively conquering this area. 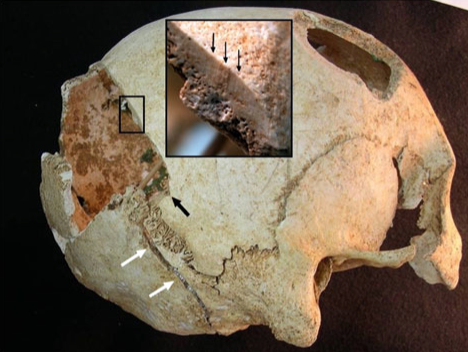 The individual under investigation is an adult male from the cave. The skeleton was extremely robust with pronounced muscle markers (the areas where muscle attaches to bone, which can become enlarged when the muscles are heavily worked). The muscle markers on the right side of the body are more pronounced than the left, suggesting he was right-handed. His hand bones showed clear signs of stress, likely from a lifetime of holding a tight grip. The lower limbs are less pronounced but still more pronounced than the average individual- suggesting long distance walking or running. His age at death was estimated to be between 33 to 42 years, and was approximately 175 and 177 cm tall (5’7″-5’8″).  There are clear signs of ante- or peri-mortem trauma, all of which are sharp force trauma. Three cut marks were found on the skull, one on the right radius, blunt force on the left radius, sharp marks on ribs 6–9 on the left side and ribs 5–8 on the right side, on the right scapula and a number found on the cervical, thoracic and lumbar vertebrae.

From this evidence, they argue that it is highly likely the individual was some type of warrior or at least well suited to battle. The wounds on the head of the victim show that he was struck from behind and struck while on the ground. A blow to the lower left side of the head may have been cause of death. The injury to his right arm is suggestive of a defensive wound, holding the arm up to prevent the sword from hitting the face. The injury to the left radius however is suggestive of punishment, blunt force trauma and then removal of the hand. The injury to the cervical vertebrae is consistent with decapitation. Based on this, Cohen et al. (2012) construct three potential narratives for the last minutes of this individual’s life as an Assyrian captive: the last battle stand of a warrior, chased down as a defeated warrior, or tortured as an enemy. Based on comparison with Assyrian art, it is likely that the individual was captured and tortured.

Cohen et al. (2012) argue that this is the first clear evidence for Assyrian cruelty and brutality towards the enemy. The injuries are consistent with torture, match the artwork and textual descriptions, and date to a period when it was possible. However, a single individual does not mean the practice was widespread. While it does help us question our interpretations, further evidence is needed to really understand the actions of the Assyrians towards their enemies. Single individual studies like this are helpful, but don’t lend well to making broad interpretations.