A new Viking exhibition reveals that the Vikings were not just marauding barbarians.

They met with the European elite to exchange gifts, form alliances and to negotiate borders.

What do Angela Merkel and Harald Bluetooth, the Viking King of the Danes, have in common? Merkel is probably guilty of less pillaging than old Harald, but she participates in numerous political meetings throughout Europe – and so did Harald and the other Viking kings.

The kings were politicians who knew about political spin and who built up internal networks, explains Anne Pedersen, an archaeologist and curator at the National Museum of Denmark, which currently hosts a major exhibition about Vikings.

One of the main themes of the exhibition is power and international alliances:

”When the Vikings formed alliances, they did it much like we do today,” says Pedersen. “They made themselves visible on the political scene and they met with their peers at what we could call political summits where they formed networks and alliances.”

Exhibition focuses on the latest research

These international alliances are of particular relevance right now, since new research has added to our current understanding in this field. 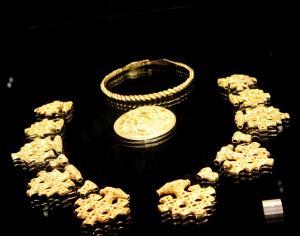 A Viking treasure found on the Hiddensee island in Germany. This used to be a chain consisting of 16 items of pure gold, and was presumably made in Denmark in the 10th century. (Photo: Asbjørn Mølgaard Sørensen)

One of the new approaches is the recent introduction to archaeological research of a scientific method known as strontium analysis. This method can help determine the geological region where a person grew up based on the enamel on their teeth.

Strontum analysis enabled archaeologists to establish how many of the dead people from the Trelleborg Viking fortress, located in Denmark and the southern part of present-day Sweden, actually came from abroad.

“This may indicate that Danish kings enlisted warriors and soldiers from abroad in the Viking Age, and that’s a sign of international relations,” says the curator.

The exhibition features some of the finds that may have been gifts exchanged within the king’s internal alliances.

Gifts opened up for trading

The kings brought impressive gifts to each other at their meetings, including large golden chains, weapons and beautifully ornamented shrines. They did this to strengthen their ties, and the more impressive the gifts were, the stronger the indication of wealth and power in the giver.

A casting mould, which can be used for moulding both crosses and Thor’s hammers. This indicates a demand in the general population for both Christianity and the ancient Nordic religion. (Photo: Asbjørn Mølgaard Sørensen)

Friendships and alliances between kings primarily benefitted the kings themselves and their friends, as gifts and marriages were a way of strengthening their internal relationship and thus securing their own position, so they could avoid being attacked.

But there were also certain benefits for the general population, at least for the tradesmen: in order to travel freely through Europe, it was important that the tradesmen’s kings had good connections.

“We know that tradesmen and delegations brought with them some form of a sign from their king, which identified them on their travels. This provided the tradesmen with a sense of security when abroad,” says Pedersen.

Christianity may have started as political spin

This stone, according to Pedersen, was a very strong symbol of power: 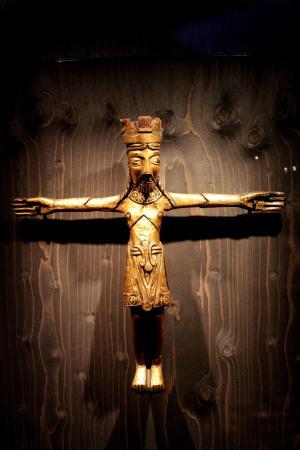 One of the earliest Nordic versions of the Jesus figure. (Photo: Asbjørn Mølgaard Sørensen)

”It acts as a message to other kings that it’s Harald who rules Denmark and all negotiations should go through him. In addition, Christianity was widespread in Europe at the time, and the acceptance of this new religion has probably made it easier to be part of a European community.”

The Danes gradually embraced Christianity up through the 800s and the 900s, up to the year 1,000, by which time Christianity had taken over from the ancient Nordic religion.

“There may well have been many reasons for the introduction of Christianity. There were missionaries who did a good job at selling the new ideas to the individual, and Christianity may well have had a broad appeal” she explains.

“But it may also have been introduced for political reasons. Many other European countries had been Christianised, and embracing Christianity was a good way of joining that community.”

The transition to Christianity was a slow one, which is exemplified in one of the finds shown at the exhibition – a casting mould, which can be used for moulding not only crosses but also Thor’s hammers.

When the Vikings formed alliances, they did it much like we do today. They made themselves visible on the political scene and they met with their peers at what we could call political summits where they formed networks and alliances.

As time passed, however, more and more Christian symbols started appearing on the finds. Jesus Christ, the cross and the lamb started to gain ground on necklaces, brooches and bangles. This, says the researcher, may be a sign that people embraced Christianity, but also that Christians were regarded as admirable.

”Some objects clearly reveal fashion trends that are copied from other countries and societies. Back then, just like today, people tended to imitate those who they wanted to belong to and be compared to,” she says.

The exhibition in Copenhagen runs until 17 November, after which it will travel to London (March-June 2014) and then to Berlin (September 2014-January 2015).