A genetic map of the British population 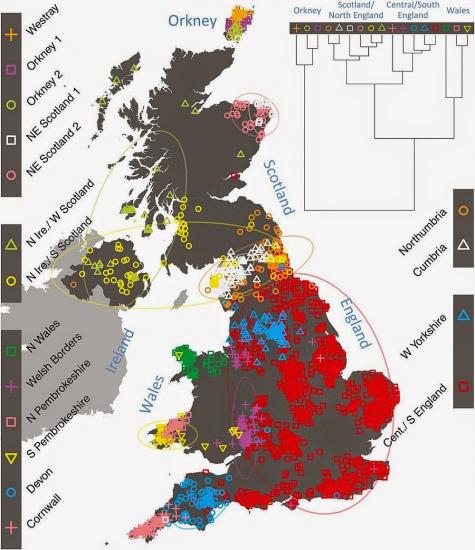 This article is a review that presents a genetic map of the British Isles from an upcoming study by Leslie et al. (2014) that is listed in the references as being "in press" in Nature. This may very well be the big POBI study of the British Isles that has been talked about for years now.

Genetic Characterization of Human Populations: From ABO to a Genetic Map of the British People

From 1900, when Landsteiner first described the ABO blood groups, to the present, the methods used to characterize the genetics of human populations have undergone a remarkable development. Concomitantly, our understanding of the history and spread of human populations across the earth has become much more detailed. As has often been said, a better understanding of the genetic relationships among the peoples of the world is one of the best antidotes to racial prejudices. Such an understanding provides us with a fascinating, improved insight into our origins as well as with valuable information about population differences that are of medical relevance. The study of genetic polymorphisms has been essential to the analysis of the relationships between human populations. The evolution of methods used to study human polymorphisms and the resulting contributions to our understanding of human health and history is the subject of this Perspectives.