A brass-and-silver astrolabe made in 1590

A rare 16th-century scientific instrument used by early astronomers that has been missing from a Swedish museum for around a decade has been recovered and will be returned this week, the London-based Art Loss Register says.

The brass-and-silver astrolabe, made in 1590 and worth around half a million euros ($750,000), turned up when an Italian collector discovered that the piece was listed as missing and came forward to return it, Register Director Chris Marinello said.

The collector, whose name was not made public, had not been seeking any reward and was "beyond reproach" in the case, Marinello said.

Bengt Kylsberg of Skokloster Castle, north of Stockholm, said Tuesday he is "just happy to get the piece back" and his museum is not planning to press any charges.

He said the astrolabe was stolen in 1999, one of a string of unexplained thefts of books and objects at the castle. Then, in 2004, a scandal rocked the Swedish cultural world when it emerged that dozens of precious manuscripts were missing from the Royal Library.

Anders Burius, then head of the library's manuscript division, confessed to stealing and selling dozens of valuable manuscripts. He was arrested, but during a temporary release from custody, he committed suicide, slitting his wrists and cutting a gas line to his kitchen stove. That sparked an explosion in his Stockholm neighborhood that resulted in about a dozen injuries.

Kylsberg said Burius had also had access to Skokloster's collections during the period of the thefts, but stopped short of saying Burius was thought responsible for the astrolabe's disappearance.

"It's still a mystery how it was taken," he said, adding "we don't intend to investigate it further."

Known since ancient times, astrolabes use stars for a variety of measurements. They can be used among other things to tell what time it is; to determine when sunrise and sunset will be; to determine latitude; and to quickly locate celestial bodies in the sky.

The astrolabe, due to be returned in a small ceremony Wednesday, is in outstanding condition, Kylsberg said. An intricate mix of astronomical knowledge and metal craftsmanship, the piece is about the size of a pancake, and engraved with the name of its builder, Martinus Weiler.

German scholar Petra Schmidl of Bonn University, who studies astrolabes, described them as a "two-dimensional model of the three-dimensional world." 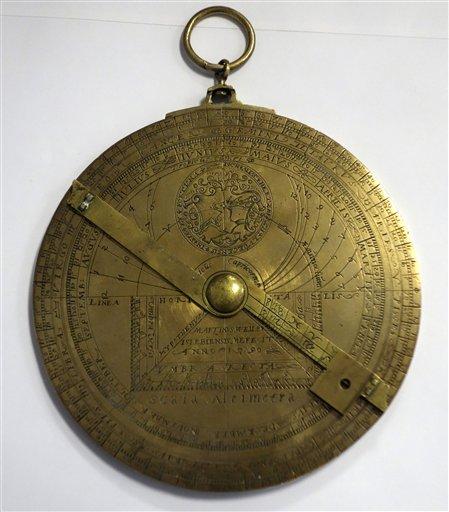 They were used by Greeks and Hebrews, were improved by Islamic scholars, grew in popularity in Europe during the Renaissance, and were finally replaced by better tools in the mid-17th century. Today fewer than 2,000 astrolabes survive.

Schmidl, shown images of the Skokloster astrolabe, said it was interesting that Weiler appeared to have used silver for the "rete," or part of the astrolabe that denotes the position of stars, and brass for the Earthly plates behind it.

She said that modern clocks, while precise, tend to leave our understanding of time "stripped from its astronomical origins."

Meanwhile, modern astronomy is sometimes more about abstract physics, and less about things that have been important to people historically, such as the length of a year or the phases of the moon. "Before telescopes, the astrolabe was the way you could say: 'What time does the sun rise? When will it set?,'" she said.

© 2013 The Associated Press. All rights reserved.