Some ailments were ancient scourges, others surprisingly modern. 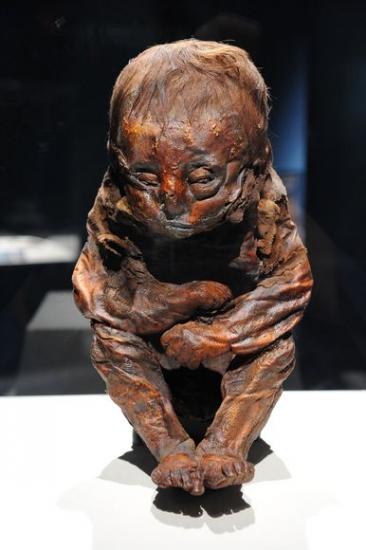 This perfectly preserved baby from Peru was born with a heart defect. Photography by Robyn Beck, AFP/Getty Images

Whether laid to rest in a simple grave or a grand tomb, the human body rarely survives the sweep of time. But in a few places where people deliberately mummified their dead, or the environmental conditions were right—very dry or wet—flesh and bone are preserved.

Today these remains, probed by modern CT scans, MRIs, and DNA tests, are offering intriguing insights into how people lived and died long ago.

A 2011 study of 52 mummies in the Egyptian Museum in Cairo showed that almost half had clogged arteries, the kind of condition that can lead to a heart attack or stroke.

What was to blame? Too much beer and bread? Not enough exercise? Chronic inflammation? Or perhaps some genetic predisposition of the interbred royals? Experts could only wonder.

As it turns out, those ancient Egyptians weren't alone. Recent CT scans of 137 mummies from four different regions, spanning more than 4,000 years, revealed that one-third had clogged arteries.

Again, the experts are stumped. But the new mummy studies got us thinking: What else have we learned about the history of disease from ancient human remains?

1. Millennia of maladies—With more known mummies than any other place on Earth, ancient Egypt is a hypochondriac's nightmare.

2. Lingering cough—Tuberculosis has plagued humans for millennia. The world's oldest cases involving modern humans turned up in the remains of a mother and child who lived about 9,000 years ago and were discovered on the ocean floor beneath 30 feet of water off the coast of Haifa, Israel.

3. Pain in the gut—Stomach ulcers aren't just a phenomenon of the stressed modern world. DNA from Helicobacter pylori, the bacterium that causes the problem, has been found in Mexican mummies from about A.D. 1350.

4. Toxic metal—Signs of cirrhosis were discovered in the mummy of a 16th-century Italian man. Since the deceased was only about 24 years old, he couldn't have been drinking and damaging his liver for decades. That suggestsWilson's disease, a genetic disorder in which copper accumulates in the body and affects the liver.

5. Cold spots—Smallpox DNA was detected in a 300-year-old frozen mummy from Siberia. The virus caused hundreds of millions of deaths worldwide during the 20th century alone; it wasn't eradicated until 1977, after intensive vaccination campaigns. The genetic information from the mummy's infection could help scientists understand the smallpox epidemics of the past.

6. Infant mortality—Some 6,500 years ago in Peru, a ten-month-old baby died. The tiny body was adorned with an amulet hung on a string around its neck, wrapped in linen, and laid in the bone-dry earth, which preserved it perfectly. A recent CT has revealed that the child suffered from a fatal combination: a heart defect and a lung infection.

7. Little person—Peat cutters working in a bog in the Netherlands in 1951 uncovered the preserved remains of a woman who may have lived during the Roman period. She likely had Léri-Weill dyschondrosteosis, a form of dwarfism.