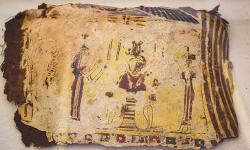 Tuna El-Gebel - A tomb containing 50 Egyptian mummies, including children, has been discovered near Cairo and it dates back 2,400 years. The mummies, 12 of which were of children, were discovered inside four burial chambers in the Tuna El-Gebel archaeological site in Minya, south of Cairo, yesterday. Some of the mummies were found wrapped in linen while others were placed in stone coffins or wooden sarcophagi. The chambers, which were nine metres deep and cut out of rock, belonged to a middle-class family who probably lived during the Ptolemaic period (305-30BC), archaeologists believe. Their identities are still unknown - although experts say the mummification method suggest they held important or prestigious positions. Mostafa Waziri, secretary-general of the Supreme Council of Antiquities, said the team who made the discovery “had not found names written in hieroglyphics”. Pottery, papyri and colourful mummy cases were also unearthed.

Bhamala - The Bhamala Buddhist Archaeology Complex sits close to Khanpur Dam at the head of the Haro Valley, marked by riverbends and hills, dotted with prehistoric caves. The stupa and monastery there date back to the 2nd century CE. They are uniquely significant in the Gandhara civilisation, the largest surviving example of a particular cross-like stupa that resembles the Aztec pyramids and more recently, the site of the discovery of the world’s oldest ‘Maha Pari Nirvana’ statue which depicts the death of Buddha. The statue, which was discovered in 2016, is 1,700 years old and 48 feet long. It was found alongside a double-halo Buddha statue, the first of its kind to be found in the history of the Buddhist civilisation in Pakistan. Noted for its unique architectural style, the Bhamala complex is said to belong to the 2nd to 5th century CE. In addition to the main stupa, there are around 19 small votive stupas in the surrounding courtyard, constructed with the diaper masonry technique. Gandhara art is credited with creating the first carved image of Buddha in human form, most of which are still intact at monasteries and stupas such as Bhamala, former Taxila Museum curator Abdul Ghafour Lone said. He said the discovery of the 3rd century Dying Buddha statue at Bhamala a few years ago indicates that a lot of the monastic complexes exposed by the Archaeological Survey of India under the British do not present a complete picture of Buddhist art and its evolution. A carnelian seal, depicting what appears to be the Gaja Lakshmi diety — one of the forms of the Hindu goddess Ashta Lakshmi, the double-halo statue, more than 500 Buddhism-related objects including fragments of terracotta tiles and stucco Buddha statues, 14 coins dating back to the Kidara-Kushan period, iron objects such as nails, hooks, door fittings, hair clips and copper artefacts were also discovered, he said, which proves that the site was not isolated from the main Taxila valley.

Bandpey - A human skeleton and related objects, dating from the Bronze Age (c. 3300–1200 BC), have recently been unearthed in Bandpey rural area, Mazandaran province, northern Iran. An adult-size skeleton, which was laid to rest in a fetus-shaped position, was found adjacent to a kiln, itself dating from the Bronze Age, ISNA reported on January 30. The discovery was made by a team of Iranian archaeologists following some 40 days of excavation. The team dug three trenches, one of which yielded intact soil in the depth of ten meters. Another one was embedding the human remains in the depth of nine meters, archaeologist Sahar Aghajan-nasab explained. “In Bronze Age, the deceased were buried in the form of a fetus beside a kiln during special ceremonies and such a ritual was customary at that time,” the archaeologist added. Earlier in January, some tomb chambers were unearthed from an ancient graveyard in Rostamabad, northern Gilan province. One of the tombs contained a human skeleton, a sword and pottery vessels full of animal bones, which may refer to food offering to the deceased person.

Qubbet El-Hawa - Six Old Kingdom mastaba tombs, two Old Kingdom shaft tombs and one rock-cut tomb with multiple burials that were previously unknown were discovered last month by the Qubbet El-Hawa Research Project (QHRP) in Aswan. Mostafa Waziri, the general-secretary of the Supreme Council of Antiquities, told Ahram Online that some of the tombs measure 190x285cm and some measure 352x635cm. One of the shaft tombs has an intact shaft. Martin Bommas, head of the mission and director of QHRP, said that although the tomb builders had blocked the entrance to the burial chamber of one of the tombs with a wall of carefully laid mud bricks, that particular tomb had been emptied in ancient times by looters who broke into the sepulchre through the rear wall, thus avoiding the security measures in place. He stressed the importance of the discovery of such a variety of high quality Late Period pottery, and its potential for scientific analysis. Abdel Moneim Saeed, director of the Aswan Antiquities department, said that the discovery changes the understanding of the area of Qubbet El-Hawa.

Petén Itzá - Teams of Guatemalan and Polish researchers recovered several hundred Maya artifacts from Lake Petén Itzá, where the Classic period Maya capital of Nojpetén was located on Flores Island. Polish team leader Magdalena Krzemień of Jagiellonian University suggested some of the artifacts had been used in religious rituals to the north of the island, perhaps to honor Chaak, a rain god. For example, divers found three stacked bowls that had been placed on larger three-legged vessels, one of which held a nearly eight-inch-long obsidian blade. “Its presence is clearly associated with ritual and sacrifice,” Krzemień said. The top bowl in the stack held fragments of burned wood and obsidian. “It is a mystery how the Mayans were able to deposit the offering so that the vessels did not scatter over a larger surface,” added underwater archaeologist Mateusz Popek of Nicolaus Copernicus University. “We suspect that they were dropped to the bottom in a net.”