Jérusalem - Israeli archaeologists have discovered what may be the oldest miniature Byzantine prayer box to date, archaeologist Yana Tchekhanovets announced last week. The discovery - made by Tchekhanovets and fellow archaeologist Doron Ben-Ami about a year ago during an Israel Antiquities Authority excavation in the Givati parking lot across from the City of David - sheds light on art in ritual in Byzantine-era Jerusalem. The box, discovered in the Byzantine strata (324-838 C.E.) in the plaster between two floor tiles, is approximately half the size of a matchbox: 2.2 centimeters by 1.6 centimeters, and a few millimeters high. The inside contains delicate and partially erased drawings of Christian icons. With a little effort it is possible to discern a blurred feminine face and, on the bottom, a clearer male face. The colors used to make the icons have survived and shades of red, blue, brown and white are detectable, all against a delicate gold background. The big question revolves around the identity of the two icons in the prayer box. The likely answer, says Tchekhanovets, is that they are Jesus and Mary, but it is certainly possible that they could be other local saints who flourished in that era. Like the prayer boxes sold today in souvenir shops, its Byzantine predecessor was used as a personal ritual object that could be taken anywhere. When worshipers wanted to pray, they would open the box and pray before the icons, and it would function as a miniature church. The archaeologists have handed over the prayer box to the Hebrew University's nanotechnology lab for further review, providing additional information about the composition of the pigments used on the prayer box. Of the two substances used as the base for dyes in that period, beeswax and egg yolks, Tchekhanovets believes that the eggs were preferred by the artist who drew these icons.  This is not the first ancient prayer box to be discovered in the region. The cover of a similar, and perhaps identical, box - but not the images inside - were found in the Jordanian city of Jerash many years ago, indicating that the prayer box discovered in a modern-day parking lot in Jerusalem is not the only one of its kind.

Chennai - The Tanjore Marathas sure did have a flair for aesthetics even when it came to decorating their lethal weapons. The ‘dagger with a central glass body' which is the exhibit of the week at the Government Museum Egmore is testimony enough. “The central part of the dagger is made of hardened glass and has triangular contours,” says curator, C. Maheswaran, about the 16th century piece. “The serrations that line the edges are blunt so as to not harm the person handling the weapon. But once the dagger is pierced into the body, it can cause serious damage,” he adds. This unique collection was acquired through a transfer from the Tanjore Armoury to the Government Museum, by the then English East India Company during the early 1900s. The hilt and the tapering on the end of the dagger are crafted out of silver while the gold guilt has been eroded. The use of precious metals such as silver and gold may indicate that this piece was used by the royal family, observes P.D. Balaji, head-in-charge, Department of Ancient History and Archaeology, University of Madras. The aesthetic aspect of this dagger is further enhanced with a pair of semi-precious red stones to indicate the eyes of the yali which forms the handle. The exhibit will be on display till November 6. 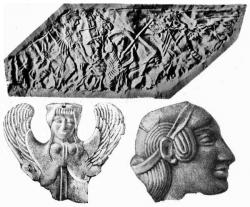 Benghazi  - Interpol has alerted police forces to the theft of the so-called “Benghazi Trea­s­ure”, which was stolen from a bank vault in the city on 25 May. The theft of thousands of antiquities went unpublicised at the time, some three months after rebel forces had seized Benghazi from troops loyal to the late Muammar Gaddafi. The looted treasure, which includes Greek and Roman gold, had been stored in two padlocked second world war military chests and a safe. It has never been displayed in Libya and its existence had been virtually forgotten, except by specialist archaeologists. Francesco Bandarin, Unesco’s head of culture, working with Libyan archaeologists, is ­det­ermined to hunt down the treasure; Interpol has alerted 188 national police forces. Inform­ation about the loss is scarce, but there is some new evidence, based on research by Italian archaeologist Serenella Ensoli, the Naples-based director of the Italian Arch­aeological Mission to Cyrene. The Benghazi Treasure is the name given to a collection of the most important antiquities that were excavated in Cyrenaica after the first world war, when Italy occupied Libya following the collapse of the Ottoman Empire. The finest items were found in 1917 at the Temple of Artemis in Cyrene, the largest Greek site in Africa, which is east of Beng­hazi. Dating from the fifth and sixth centuries BC, the gold included earrings, embossed heads and a plaque depicting a battle. Other material came from the Hellenistic Palace of Columns in Ptolemais (between Cyrene and Benghazi), which was excavated from 1937. A third element is the Meliu collection of 2,000 coins. The Benghazi Trea­s­ure comprises 364 gold coins, 2,433 silver coins, 4,484 bronze coins, 306 pieces of jewellery and 43 other antiquities, including stat­ues. The story of its 20th-century history is only now emerging. In 1942, when Allied forces were approaching Libya, Italian archaeologists packed up the treasure. Early the following year, they sent it to Rome in the military chests. In May 1944, the chests were moved for safekeeping to the northern city of Cremona and later to Val Brenta, in the Dolomites. After the war, the Libyan finds were returned to Rome and were deposited at the Museo Coloniale. It was not until 1961 that the collection was finally returned to Libya. A typescript inventory was then compiled, unfortunately without photographs. On its return, the treasure was lodged in a bank vault in Benghazi, and remained there after Gaddafi seized power eight years later. In 1980, further archaeological finds were added to the material deposited at the bank.

INDE – Peshawar - Prayers were offered on Sunday in an 1823 vintage temple in Peshawar that has been closed for worship for the past 60 years. The Goraknath Temple is located in Gor Kattri archaeological complex which traces its origins back to the pre-Christian era and has an association with Buddhist, Mughal, Sikh and Hindu traditions. The Gor Kattri complex is best known for the display of Gautam Buddha’s begging bowl before it became a centre of Hindu worship. There is a reference to the complex in the `Babarnama’. Since the area is at the crossroads of an old trading route, a `caravansarai’ (rest house for caravans) and a mosque were built later as per the orders of Jehanara, the daughter of Shah Jehan. This mosque was destroyed during the Sikh rule and replaced with a temple to Goraknath.