Al Rustaq -  A team of archaeologists has excavated a 4,000 year old settlement in Rustaq, South Batinah. The settlement includes a large number of man-made structures and burial sites. Studies indicate that the site was inhabited for the first time in the 3rd millennium BC corresponding to the Early Bronze Age. It is one of the settlements of Umm al Nar – a Bronze Age culture, which witnessed great and wide prosperity in the sultanate. The archeology team has unearthed remains of copper furnaces, clay utensils that were made locally and outside Oman, soapstone vessels, residential quarters of varying sizes and burial sites. More significantly, circular towers, some more than 40m in diameter, were also found. “Built with mud bricks on huge stone foundations, these were found in different parts of the settlement. The presence of public buildings and huge towers in the settlement indicate the important cultural role the settlement played during the Early Bronze Age.”

Hatra - Evidence of ancient hybrid camels has been uncovered by archaeologists who were working to restore a temple in northern Iraq damaged by ISIS. The Temple of Allat, which dates to the second century AD, is located in the city of Hatra, a UNESCO World Heritage site. Once a sprawling metropolis, it served as the capital of the Kingdom of Hatra. During restoration after the recent damage, researchers spied something unexpected in a frieze above a door of the Temple of Allat. The horizontal stone piece of artwork appeared to show hybrid camels that resulted from crossing two different breeds. The depiction of these camels has helped researchers gain a better understanding of ancient Hatra, which was a small neighboring kingdom of the Roman and Parthian empires — though those neighbors were often more hostile than friendly. The artwork also adds to the growing evidence that researchers have of when and where camel hybrids were bred. Previously, researchers believed different types of camels were crossbred primarily in expansive empires. This latest finding shows the practice was more widespread. The image appears to express a precise message — the direct involvement of the king in camel herding, management and hybridization practices. The artwork was added to the temple during a renovation conducted by King Sanatruq I and his son, Abdsamiya in 168 AD, the researchers believe. It was during this time that the royals rededicated the temple to the goddess Allat, in addition to erecting nearly life-size statues of themselves. Previous research on the stone frieze suggested that it depicted eight dromedaries, with two Bactrian camels in the middle. Dromedaries are Arabian camels, Bactrian camels are native to Central Asia and have two humps. These hardy pack animals can withstand high altitudes, cold temperatures and even drought. When Vidale and his colleagues took a closer look at the artwork, they noticed that the faces and fur of the two so-called Bactrian camels actually looked more like a cross between a Bactrian camel and dromedary. And rather than a sizable space between the two humps, there was just a slight indentation — a trait that has been observed in hybrids of these camel breeds. People have been breeding camels since the first century AD, according to the oldest hybrid camel animal skeletons recovered from the Roman and Parthian empires. This husbandry practice went into effect thousands of years ago because it leads to stronger and more resilient animals. Hybrid camels could carry double the load of dromedaries and more than double what a Bactrian camel could support. Despite its diminutive size when compared with the surrounding empires, the kingdom of Hatra was still able to import distant Bactrian camels from the steppes of Central Asia and breed camels as a show of power. A study detailing the findings published Tuesday in the journal Antiquity. Jupeda - A megalithic burial site dating between 3,000 BC and 1,800 AD with cairns and cist graves was discovered in an agricultural field in Jupeda village of Tirumalayapalem mandal in Khamman district. There are piles of stones laid in a circular pattern around the heaps, which is a typical cairns burial. There are also cist burials, where the explorers found ‘post holes,’ openings in one of the ‘Orthostats’ (stone planks) erected around the cist burials. Capstones that were originally placed on the burials were also found scattered in the agricultural field.  The openings are aligned with the pole star in the North Pole, as per the religious belief of people of those times.

Mount Ebal - An ancient amulet made of lead and written in ancient Hebrew was found among the remains of the excavation carried out at the archeological site on Mount Ebal in Samaria, where the biblical-era altar of Joshua bin Nun is located. The amulet is inscribed with the letter Alef and a mark reminiscent of a lotus flower. 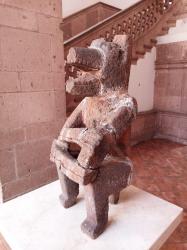 Llanos de Canícuaro - Archaeologists from the Instituto Nacional de Antropología e Historia in Mexico have recovered an important artifact of pre-Hispanic culture: a monumental coyote-headed figure perched on a throne. Known as the coyote-man from Tacámbaro, an area in the central Mexican state of Michoacán, the sculpture was discovered almost 30 years ago during construction work in the municipality. The artifact was held in a private collection until it was recovered by the NAH. The Llanos de Canícuaro neighborhood in Tacámbaro, where the coyote-man was first unearthed, was the site of the Tarascan city of Tzintzuntza, meaning “place of the hummingbirds” in the Purépecha language. Representations of coyote spirits were prolific in the ancient settlement, though few were as tall or intricately carved as the sculpture recovered. On the importance of the sculpture, archaeologist José Luis Punzo said, “We know that the last lords of Tzintzuntzan, who wrote the Relacion de Michoacán, were the so-called uacúsecha, the ‘lineage of the eagle’. Next to this was another large city on Lake Pátzcuaro, Ihuatzio, which means ‘place of coyotes’, where most of these sculptures have been located.” He added: “One of the hypotheses is that the coyote-man sculptures could represent a dynasty that ruled this place, even before the Uacúsecha history was written.”

Tempsford - Archaeologists have unearthed "hugely exciting and significant" Roman finds ahead of a road improvement scheme. The ancient farm was discovered during excavations near Tempsford in Bedfordshire. Its history spans about 700 years from the Middle Iron Age (300 to 100BC) to beyond the Roman era. The dig revealed two large round houses and a Roman pottery kiln, with a large number pots which failed during firing. Neolithic and Bronze Age flint arrowheads were also discovered dating to between 4000 to 700BC, suggesting people were hunting animals in the area well before the farmstead existed. The two 15m (49ft) round houses were the first evidence of a settlement at the site, alongside remains of butchered animals, pottery, loom weights for weaving and personal items. The farm expanded after the Roman conquest in AD43. The site was used both for production and trading.